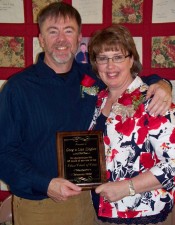 Zieglers honored for 25 years of service to Missouri church

Staff
The Ziegler family has been in the news a lot lately, mainly because of Brad Ziegler, an Oakland A’s relief pitcher who started his career by pitching a record 39 consecutive scoreless innings last season.
But it was Brad’s parents, minister Greg Ziegler and his wife, Lisa, who made the front page of The Odessan in Odessa, Mo., recently. The paper reported on a reception honoring 25 years of service by the Zieglers to the 125-member Odessa church.
The Zieglers met while both were students at York College in Nebraska. After Greg finished Sunset International Bible Institute in Lubbock, Texas, the couple raised Brad and his younger sister, Melissa, at the church. Brad could not attend the reception, but sent a note telling The Christian Chronicle about his parents’ milestone.
One building, dual purpose
PARAGOULD, Ark. — A 17,000-square-foot expansion to the growing Hillcrest church will benefit Crowley’s Ridge College, a Christian college that uses the church for daily chapel services and two classes.
Eight of the 10 new classrooms at the church building are designed for joint use by the church and college, said Ken Hoppe, Crowley’s Ridge College president and Hillcrest elder.
The church is on seven acres next to the college’s 150-acre campus. Hillcrest members already have made gifts totaling more than $210,000 for the new family life center and classrooms. The total cost is estimated at $870,000.
“Hillcrest has approximately 200 members and began as the College Church of Christ in 1964 on the Crowley’s Ridge College campus,” Hoppe said. Formerly a two-year school, Crowley’s Ridge became a four-year college last year after receiving state approval to offer baccalaureate degrees.
ARKANSAS NORTH LITTLE ROCK — A spring break campaign led by Eddie Cloer of Harding University resulted in at least 15 baptisms.
In the campaign by the Levy church, several Harding students were paired with area evangelists and conducted Bible studies, organizers said.
COLORADO DENVER — The East Denver and Park East congregations have merged to form the Mile High Church of Christ.
The evangelist is Ian Nickerson Sr. The church meets at the Park East location.
CONNECTICUT MANCHESTER — Gailyn Van Rheenen, facilitator of church planting with Mission Alive, taught two classes at the recent New England Church Growth Conference.
Van Rheenen spoke on “Grassroots Church Planting.” About 100 people from 20 churches attended the conference.
“I praise God for developing urgency and momentum toward church planting in this and other areas of the country,” he said.
DELAWARE NEWARK — Jim Morris, son of Newark church member Jean Lewis, shared in an Academy Award for his feature-length animation movie “Wall-E.”
Morris served as producer of the Pixar Animation Studios film, which won the Oscar for best animated feature.
KENTUCKY BOWLING GREEN — On Easter Sunday, April 12, members of the Mount Zion church expect to be back in their own building again — a brand-new building, a little larger than the historic structure that burned Aug. 15, the Bowling Green Daily News reported.
“We’re trying for that,” church elder David Eadens told the newspaper.
Arson was blamed in the fire last year that claimed the 156-year-old church — believed to be the oldest Church of Christ in Kentucky.
MAINE PORTLAND — The Greater Portland church hosted a recent “Lock In” for young people from all over New England.
More than 40 junior high and high school students attended.
“This is a significantly large number at a youth event of this size in New England,” church member Shelly Kellis said.
Mark Kellis spoke on “Hearing God’s Voice.”
OKLAHOMA MIDWEST CITY — Residents who need assistance after a tornado, wildfire or other disaster can seek temporary refuge at the Eastside church.
The congregation’s Growth and Outreach Center will be used as this Oklahoma City suburb’s first temporary disaster relief facility, The Oklahoman reported.
Minister Dale Hartman told the newspaper the facility could provide food, clothes and showers for 30 to 50 people displaced by a disaster.
OREGON BEAVERTON — The Westside church’s praise team recently produced a CD of mostly original songs used in the congregation’s Sunday morning assemblies.
The CD was inspired by Westside’s longtime family life minister, Ron Stump, who died recently after a long fight with cancer.
“Ron is the one who suggested a few years ago that the Westside praise team produce such a compilation of music,” church elder Roy Brower said. “The CD was professionally produced, has an accompanying music book and is all a cappella.”
TEXAS SALADO —The Salado church celebrated its sesquicentennial on March 8, almost exactly to the date of its beginning, which was March 10, 1859.
James Haney, a retired preacher now working as the congregation’s office administrator, played a role in the 150th anniversary service.
As a student at Abilene Christian University, Hanley served as the Salado church’s minister in 1959 — when it turned 100 years old.
Singing was directed by Ben Lazcano, who serves the church as worship leader and youth minister.
Other participants included minister Joe Keyes, former minister James LeFan and Stan Reid, president of Austin Graduate School of Theology.
WASHINGTON TACOMA — After serving 40 years, Sam Granberg has stepped aside as an elder of the Lakeview church.
Lakeview’s eldership was established in February 1969, and Granberg was one of the three shepherds initially installed. He is the only one still living.
The congregation has an average Sunday morning attendance of 375, but only five current members, including Granberg and his wife, Marlene, attended in 1969.