California church member overcomes fears as he leads ministry that serves the needy.

CAMARILLO, Calif. — A few miles from the Camarillo Church of Christ, a man with a backpack and a bicycle squats at a busy intersection.

Chris Kibbe, who describes himself as between jobs and homeless, holds a cardboard sign.

Not long ago, many members of the Camarillo church — which meets in a palm-tree-shaded building just off the Ventura Freeway — might have averted their eyes and driven right past Kibbe.

But now — thanks to a packet ministry started by Luke McAllister, a 20-year-old church member with autism — the congregation is equipped and eager to help.

“It’s easy to become blind to things,” preacher Alan Beard said. “But in the same way that if you have a watering can, you look for flowers to water — if you have a packet, you look for someone who’s thirsty or needs a quick meal or a couple of dollars.”

“I think that’s great,” said Kibbe, 49. “Lots of people are down on their luck and could use some help.” 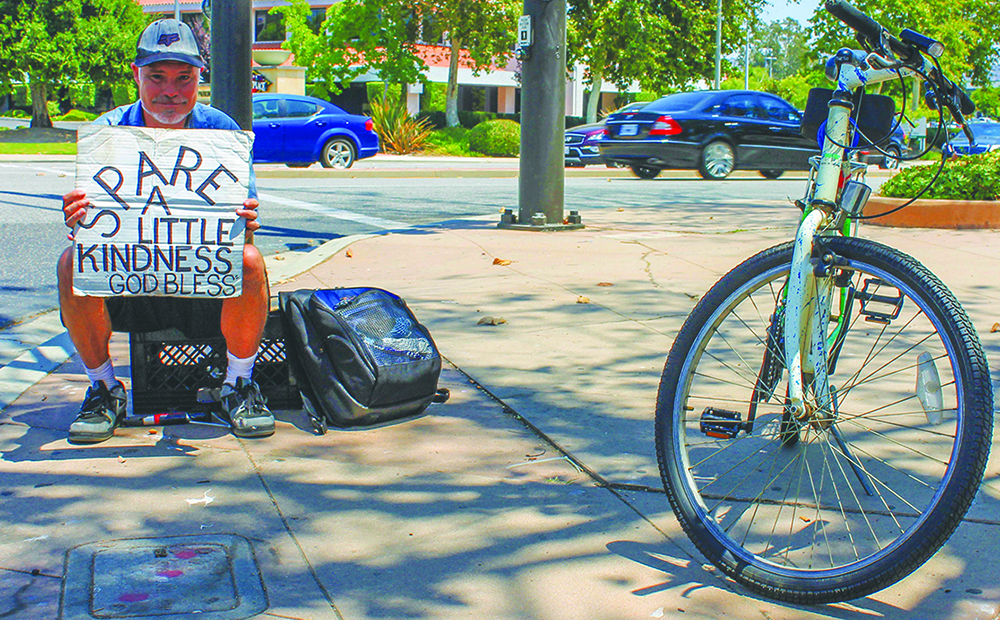 Chris Kibbe, who holds a sign asking for kindness near a busy shopping mall, praises Luke McAllister’s desire to help needy people. (PHOTO BY BOBBY ROSS JR.)
A PURPOSE FOR LUKE
In his effort to help others, Luke McAllister has found a transforming purpose for his own life.

“I started to meet people that made me think I did not have it so bad,” wrote McAllister, who has a mostly nonverbal form of autism and battles severe anxiety and panic attacks.

“If I can ease a scared soul, my trials are not so bad.” Luke McAllister, Camarillo Church of Christ ministry leader

“I have been given an incredible support system, and it scares me to think about traveling alone in this world, but that is the reality for so many,” the 20-year-old added. “If I can ease a scared soul, my trials are not so bad.”

A typical Sunday finds McAllister seated between his parents, Ted and Dena, at the 100-member Camarillo church, about 50 miles west of Los Angeles. 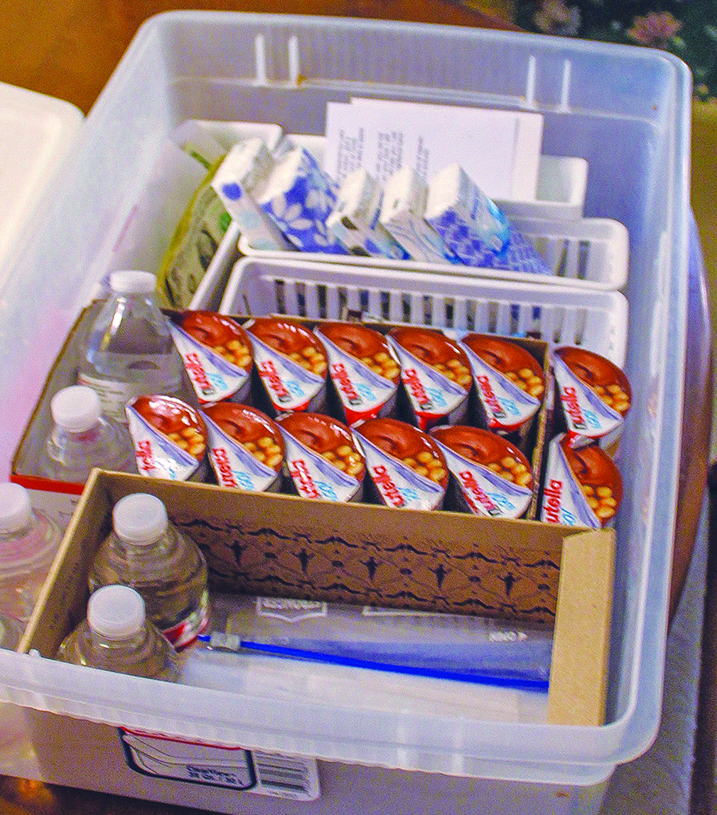 Luke McAllister keeps supplies for the packets in large plastic tubs. (PHOTO BY BOBBY ROSS JR.)Fellow church members have known Luke McAllister since he was 3. So they don’t flinch if he makes an occasional noise — described by his mother as a “small vocalization” — during the sermon.

“They pray for him all the time, and they finally started saving the back row for us so that Luke could be near the door,” Dena McAllister said. “If he felt like he needed to leave and go walk around the building a couple of times and come back in or whatever, he could do that.”

At his home congregation, Luke McAllister is recognized not for his neurodevelopmental disorder but for his heart for serving the needy and homeless.

What began as a family outreach quickly grew into a congregational ministry — led by Luke McAllister.

And soon, the idea spread to other churches, including the Conejo Valley Church of Christ in nearby Thousand Oaks, Calif.

“Luke’s concern for others is exemplary for all of us,” said Carolyn Tyler, a 44-year member of the Camarillo church. “He really sets an example.” 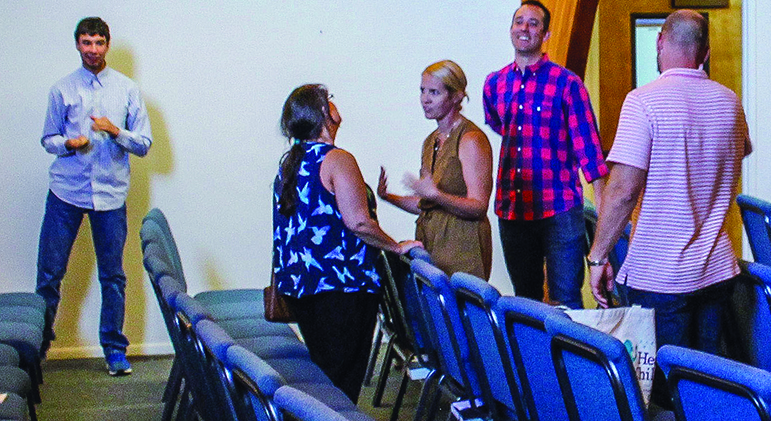 Luke McAllister stands by a wall in the Camarillo Church of Christ auditorium as members greet each other after a Sunday morning assembly of the Southern California church. (PHOTO BY BOBBY ROSS JR.)
NO LONGER SILENT

Luke McAllister uses a 9-by-12-inch alphabet board and sometimes the keyboard on his iPad to spell out words and sentences.

Even then, expressing the thoughts in his brain in a way that other people — including his family — can understand them can be a major challenge.

“Luke hasn’t been typing that long in this manner, so it’s still a growing skill,” said Dena McAllister, who has a graduate degree in education but has devoted herself to her son’s 24/7 care. “We still appreciate every word he says because it takes work. … For so long he had to be silent.”

When his older sister, Elisa, 23, now a senior at Lipscomb University in Nashville, Tenn., left for college, he made clear how much he missed her.

“It was the first time he probably really started typing about his emotions,” his mother said.

Besides caring for their son, the McAllisters — who met as freshmen at Oklahoma Christian University in 1979 — worry about aging parents who are in their 80s and 90s and live 1,400 miles away in Oklahoma. 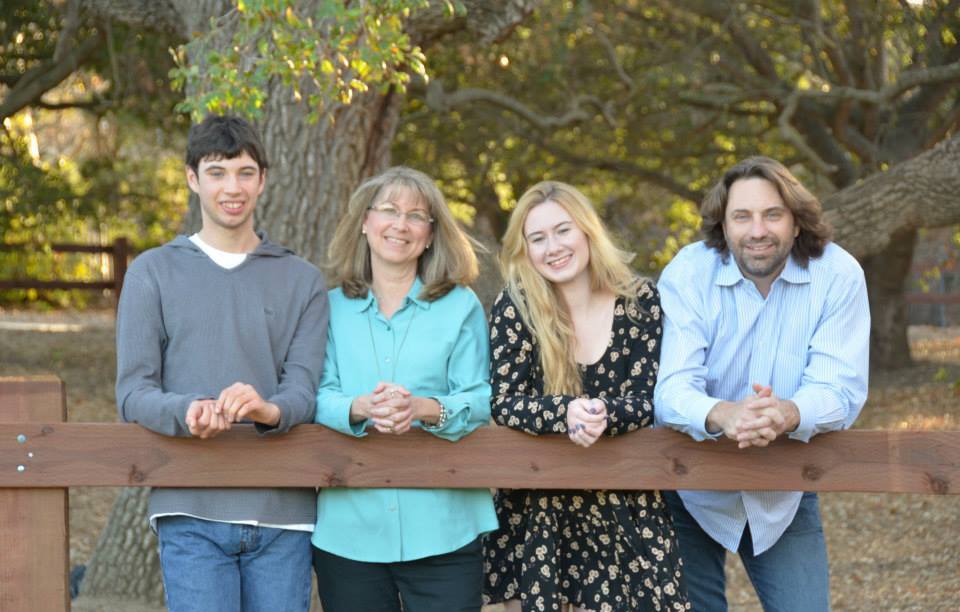 In a written profile of himself, Luke McAllister cited his desire to be helpful to others and fulfill God’s purpose for his life.

“I can’t speak in sentences, but I can listen,” he wrote.

He described himself as intelligent with a good sense of humor. He said he enjoys listening to music, horseback riding, biking, jigsaw puzzles, Mexican food and learning about science and history.

He has a dog named Buddy.

“Luke really likes walking his dog,” Dena McAllister said. “That’s part of what makes him feel better and get some exercise and get out in nature.”

Because of his autism, social interactions are extremely difficult for Luke McAllister.

As his family visited with The Christian Chronicle, he kept his head down and focused on “Winnie the Pooh” and “Gilligan’s Island” episodes that he watches on his iPad.

“That’s part of his calming strategy,” said his mother, who assured the Chronicle her son hadn’t missed a single word of the interview. 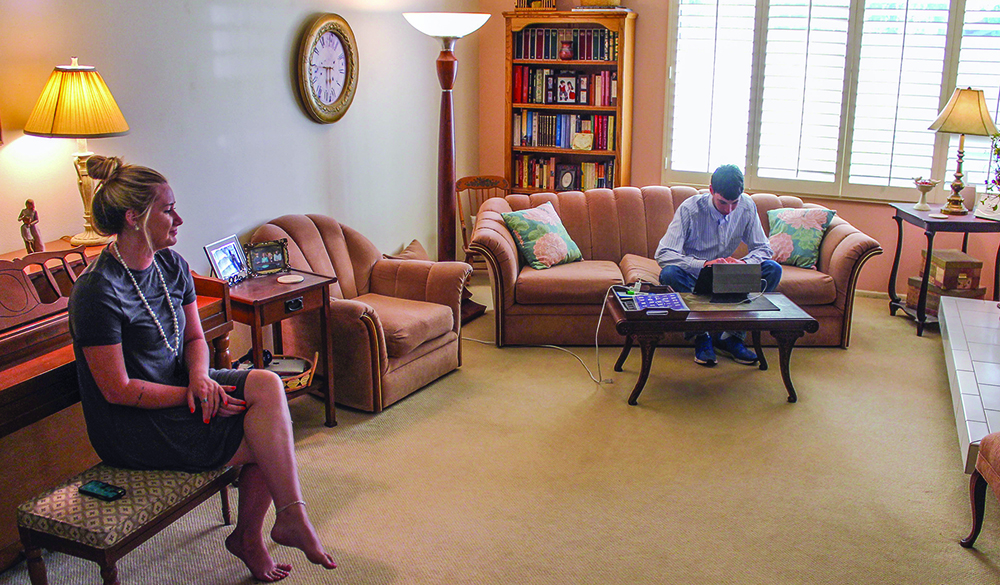 Luke McAllister watches a “Winnie the Pooh” cartoon on his iPad while his sister, Elisa, listens during an interview at the family’s California home. “My beautiful sister,” Luke wrote when he posted a picture of the two of them on Facebook. “I adore her.” (PHOTO BY BOBBY ROSS JR.)
‘HOW CAN WE HELP?’

Most weekends, Luke McAllister goes with his father to Trader Joe’s neighborhood grocery.

That shopping center is where beggars at street corners first caught his attention.

“How can we help?” Luke McAllister asked before coming up with his idea.

“Luke designed the ingredients to be able to be in a car,” said Ted McAllister, an associate professor of public policy at Pepperdine University. “Even though the water might get hot, nothing is going to melt. So he was very purposeful about what would go in it.” 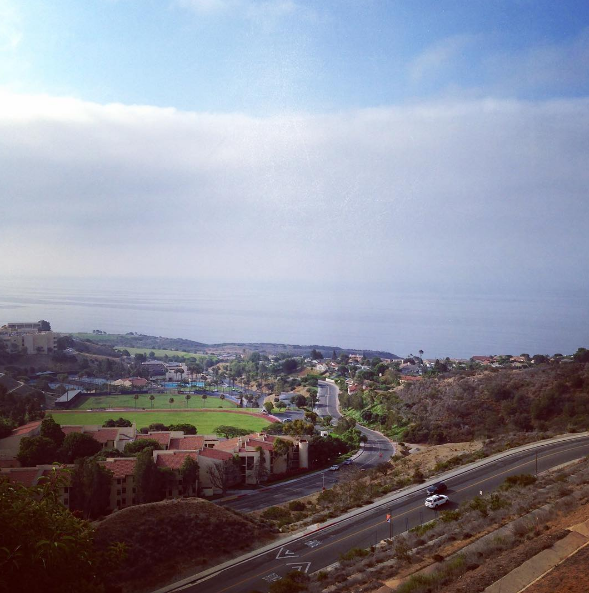 Ted McAllister, Luke’s father, teaches at Pepperdine University in Malibu, Calif. (PHOTO BY BOBBY ROSS JR.)At first, the McAllisters handled the outreach effort on their own.

But then church leaders heard about it and asked Luke McAllister to involve the entire congregation.

“When that happened, Luke said, ‘Well, I’ve got to write a speech to introduce it,’” Dena McAllister recalled. “We were kind of blown away that he wanted to try that.”

To give such a speech — which he typed on his iPad and played out loud as his father stood beside him — Luke McAllister had to overcome fears.

“The most purposeful I’ve ever seen him to do something was for this,” Ted McAllister said. “It takes a lot of effort on his part to do this … yet it’s the one thing that he has been relentless about.”

In the short presentation, Luke McAllister quoted Scriptures on blessings and compassion and explained his motivation.

“I care greatly for the homeless,” he told the congregation. “I care for individuals I see in immediate need. I care intensely about individuals in need who are directionless.”

Some of Luke McAllister’s word choices — such as “directionless” — fascinated his parents.

“My theory — which I think Luke has confirmed to me if I’m reading him correctly — is that because it’s so labor intensive for him to put together words, he almost chooses a poetic way of expressing things,” Dena McAllister said. “He uses words much more precisely than most people do.”

Luke McAllister encouraged members to grab a few packets in the church lobby each Sunday and distribute them during the week.

“Scripture is reminding me I have a lot to give,” he said. “The Good Samaritan story in the book of Luke reminds everyone to stop and help.” 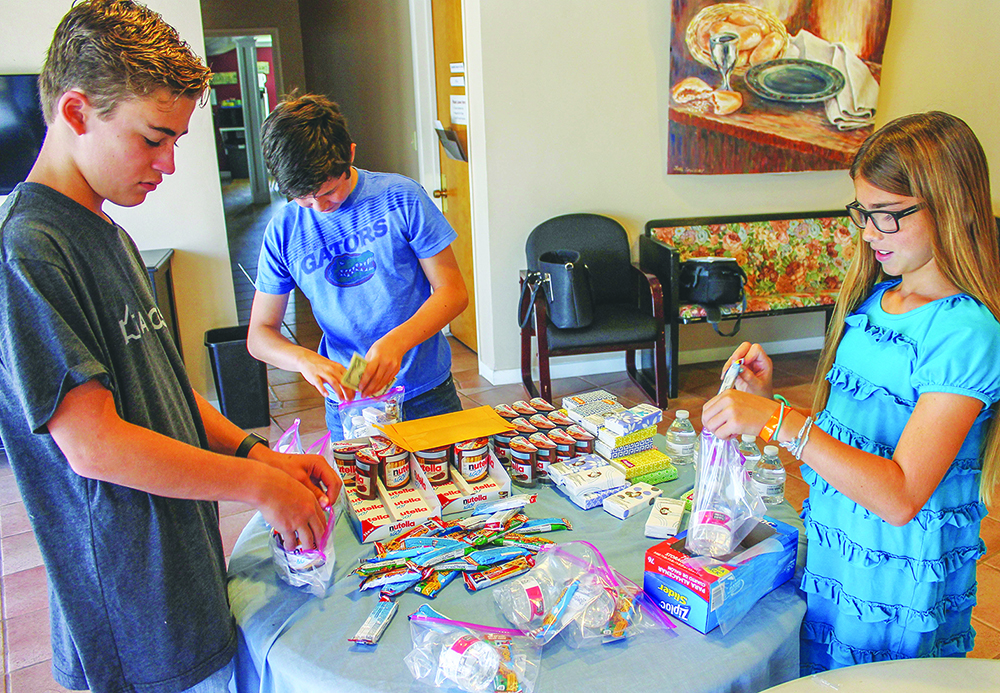 The church’s youth group helps assemble the packets — putting the snack items and two $1 bills inside each Ziploc bag.

Also included: a hand-size note featuring Scriptures such as “Give thanks to the God of heaven, for his steadfast love endures forever” (Psalm 136:26).

The note explains that the packet “was prepared by Luke, a young man with autism, and other members of the Church of Christ.”

Henry Price, a member of the Camarillo church, said he always felt empathy for the homeless but never knew how to help. 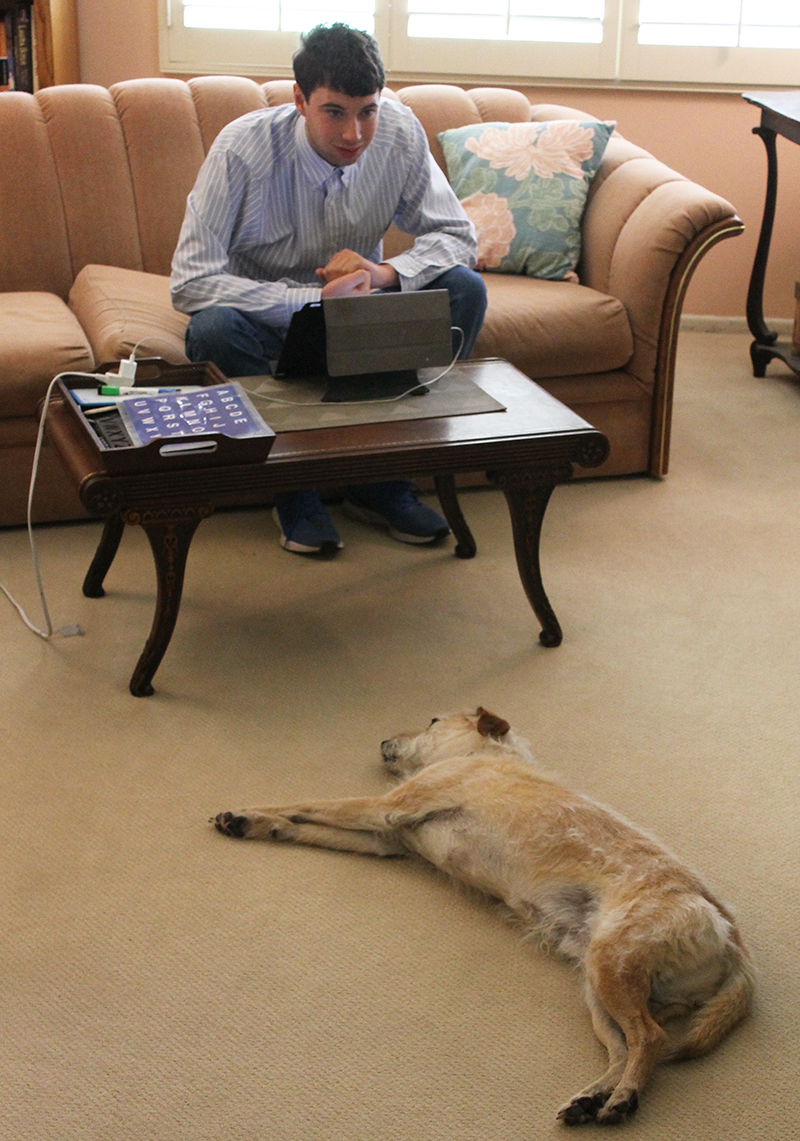 Luke McAllister’s dog, Buddy, relaxes in the family’s living room. (PHOTO BY BOBBY ROSS JR.)“I have given out many of Luke’s packets over the last year or so, usually to people who panhandle on street corners,” said Price, a professor of music at Pepperdine. “They are always thankful. If there is an opportunity, I tell them about Luke.”

In all, church members have distributed more than 1,200 packets.

Tara Morrow, whose 12-year-old son, Dawson, helps put together the packets, said her family carries three or four in their car.

“I like the conversations at the dinner table about how this could affect people,” she said. “Even just someone knowing in their heart that someone cares for them at that moment … maybe that could spark something.”

“It’s made him one of the ministers here instead of one we just minister to,” she said.

By putting Luke McAllister in charge, the church made him feel like a valuable part of the congregation, his parents agreed.

“Not only did he find a role to play, but he found a role that’s rather central to the cohesiveness of our little church,” Ted McAllister said. “It gives us a sense of identity.”

While autism is not something the McAllisters would have chosen for their son, they believe God has used the disorder to serve a higher purpose.

“Autism is part of why he was really heard and why people are really listening to this idea,” Dena McAllister said. “And that is really wonderful that God has used it this way.”

Katie Anawalt She gave this definition of autism: “Autism is complex disorder of neurological development in which sensory connections develop unevenly which likely impacts attention, perception and motor abilities (i.e., motor control, coordination, posture, planning and anticipation of responses). Many individuals with autism experience difficulty in the simultaneous integration, organization and interpretation of information from all learning channels (visual, auditory, tactile, kinesthetic and olfactory). As a result, autism is characterized by challenges in communication, social interaction, speech and/or the presence of sensory defense actions.”

ALLEN, Texas — Aunt Melba has no idea who Harold… 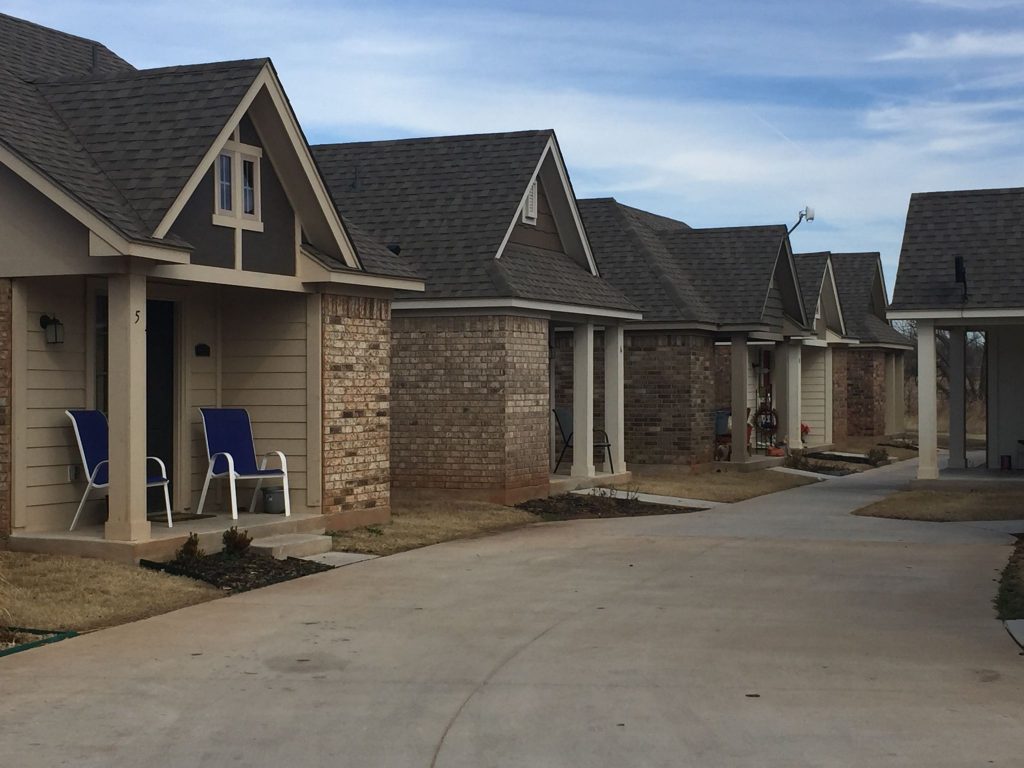 NORMAN, Okla. — In this college town, known for national football…