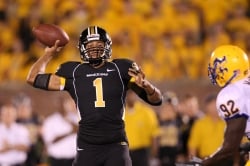 COLUMBIA, Mo. – (AP) — James Franklin’s father was a standout tight end at Oklahoma before going on to the NFL.
The Sooners recruited Willie Franklin’s son as an athlete, while Missouri wanted him to play quarterback. That sounded good to the younger Franklin, who eventually lost interest in following his dad’s footsteps to Norman, Okla.
“With him it was quarterback the whole way,” offensive coordinator and recruiting coordinator Dave Yost said. “He’s smooth and athletic, but I don’t know what else he’d play here if he didn’t play quarterback because he’s not vertically the fastest guy out there.”
Franklin will try to beat his dad’s alma mater on Saturday night and help the Tigers (2-1) knock off the nation’s top-ranked team for a second consecutive year.
The 6-foot-2, 225-pound sophomore from Corinth, Texas, said he wasn’t an Oklahoma fan growing up, although he remembers watching some games on TV with his dad. Forget the family ties, though.

Read the full story.
Willie Franklin, who played for the Baltimore Colts, is a well-known minister and speaker in Churches of Christ.
Last year, Franklin spoke on Mission Sunday at my home congregation, the Edmond Church of Christ in Oklahoma, on the morning after his son scored a touchdown in Missouri’s upset win over Oklahoma in Columbia, Mo.
In the sermon, Franklin mentioned his son:

“Keep him in your prayers. He’s not just at Missouri to play football. One of the guys asked him — since he doesn’t cuss, doesn’t do tattoos, don’t do earrings … (My son) said, ‘My sisters wear all that stuff.’ They said, ‘Well, why you here playing football?’ He said, ‘Because I want to bring some of y’all to Jesus.'”

The sermon title: “Don’t Just Stand There, Do Something!” Click here and scroll down to listen to the Oct. 24, 2010, sermon.