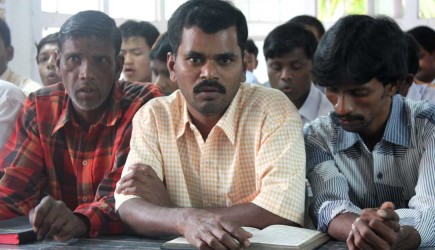 Whom shall we send?

Erik Tryggestad
KAKINADA, India — India’s missionaries train here.
They come to the Kakinada School of Preaching from across India — including Bihar and Orissa states, where Christians routinely suffer persecution. Some bear the light skin and Asian features of Mainipur state in India’s far east. A few are from Myanmar, a nation in Southeast Asia where religious gatherings often are restricted or prohibited.
Despite the risks, the students intend to return to their homelands after graduation and plant churches.
The school began in 1971 with the goal of training “reliable men who will also be qualified to teach others,” president Nehemiah Gootam said, quoting the words of 2 Timothy 2:2.
Those “reliable men” come increasingly from the Global South — India, Southeast Asia, Latin America and Africa. Churches of Christ in these locales have boomed in the past century.
Less than 50 years after the first Churches of Christ were planted inIndia, the nation of 1.1 billion souls is home to few full-time Westernmissionaries. Ministry training programs dot the landscape of thecountry’s southern states — including the Kakinada School of Preachingand, to the west, the Jack Nelle Institute in Vijayawada. In additionto training ministers, the four-story institute houses primary andsecondary schools where students receive faith-based education.
Thoughthe schools in both cities receive support from U.S. churches, IndianChristians operate the ministries.
As Churches of Christ continue to grow in the Global South, membershipnumbers in the U.S. are on the decline. That, along with tighteningbudgets in a tough economy, has some church members weighing the costsof supporting Western missionaries versus indigenous evangelists.
“Native-born people seem to be more ‘cost effective’ per soul saved,” said Marcus Belcher, a Texas church member who supports a ministry in Nigeria. “Funding local people overcomes the barriers of language and culture.”
Continent of Great Cities, a church-planting ministry, has recruited and trained 27 mission teams for South America in the past 33 years. The ministry continues to recruit teams from North America, “but we also have made a big push with native Hispanic teams,” said Calvin Henry, director of Latin teams.
“We have found our Latin teams to be very effective, facing fewer cultural barriers, as well as more cost efficient,” Henry said. The ministry sent an entirely Hispanic team to Bogota, Colombia in 2003 and is training another for Mexico City.
“My own opinion is that North American teams are still needed, especially in areas where there is no one else prepared to do the work they set out to do … church planting, medical missions or other kinds of service,” Henry said. “But the goal should be to work toward a time when their presence is no longer necessary.”
That goal is shared by Western missionaries across the Global South, said Shawn Tyler, who has worked in East Africa for 28 years.
Tyler, who equips churches in Mbale, Uganda, stressed that Christians should continue to heed the Great Commission — Christ’s call to take the gospel to all nations — regardless of where they are in the world.
“Christ’s command in Matthew 28 does not put time, gender, age, educational, financial or methodological limits on his call to make disciples,” he said.