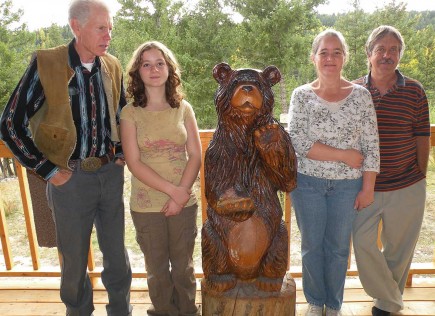 Wherever two or more — or eight — are gathered

Bobby Ross Jr.
EUREKA, Mont. — Most Sundays, eight people — two families — assemble in a small meeting room at an old hotel in this quaint town five miles south of the Canadian border.
The Smiths and the Burrises comprise the entire Eureka Church of Christ.
The church has no minister and relies on the two men — Rex Smith and Mike Burris — to teach the Bible class and serve the Lord’s Supper. A typical worship service involves watching a video sermon and singing from hymnals.

“I’ll either start the song or Mike will start it,” said Rex Smith, a hunter and fisherman who owns a heating and air-conditioning business.
“Sometimes, it’s a community effort getting it the right pitch,” added Smith’s daughter Danielle, 15, with a laugh.
Larger congregations may draw more attention, but 15 percent of the nation’s non-instrumental Churches of Christ report average Sunday attendance of less than 25.
Like the Eureka church, 1,910 congregations across the nation fit into that category, according to the 2009 edition of Churches of Christ in the United States.
The Eureka church is so tiny — and so unknown — that it missed inclusion in the directory published by 21st Century Christian.
“It’s pretty tough sometimes,” Rex Smith said of maintaining such a congregation. “There’s a lot of times that we feel like, instead of being here on Sundays, we’d rather be someplace else with other families.”
Matt Jones, a Coast Guard commander stationed in Valdez, Alaska — a 2,300-mile drive from Eureka — certainly can identify.
Jones, a father of five, shares pulpit duties with fellow member Wayne Ezell as eight to 10 people gather most Sundays. The Valdez church met in a house before moving to a storefront alongside a carpet store, chiropractor and jeweler.
Leaders felt the storefront might be more appealing to visitors. In the summer, the church sometimes doubles in size with visits from tourists.
“Its definitely different,” Jones, who grew up in a 100-member Kansas congregation, said of the Valdez church. “Especially when Wayne’s traveling, I might do the lesson, say the prayer and lead singing.”
The Joneses make it to Anchorage about three times a year and enjoy visiting with the 350-member DeBarr Road church.
“We attend there every chance we can get,” Jones said. “It’s just wonderful — it’s a shot in the arm to hear everybody singing loud and on key. And to sit through a service where you’re not doing anything is kind of a treat.”
On potluck Sundays, the Eureka church moves the worship service to the home of the Smith family, who live 12 miles outside of town on 20 acres bordered by U.S. Forest Service land on two sides and hidden at least a mile off the nearest paved road.
God’s beauty can’t be missed in these parts, where white-tailed deer mingle amid mountain streams and lush, big-cone Douglas fir trees that once made Eureka known as the “Christmas Tree Capital of the World.”
A black bear that Rex Smith shot in his back yard — from 30 feet away — hangs on the family’s living-room wall.
The Smiths greeted visitors from The Christian Chronicle with a lunch of pork tenderloin, home-canned green beans, salad, rolls and iced tea. Danielle made cookies for dessert.
The family shared stories about life and faith in a picturesque yet isolated place for those who want to live out and draw others to New Testament Christianity.
“You’re in a Catch-22,” Michelle Smith said. “It seems like you need a building to get people to know you’re there. But to get a building, you have to have people to support a building.”
Danielle Smith said she invites her teenage friends to church, but they’re not interested. There are larger, more exciting denominational churches in town, she said.
“A lot of them are going to church not for religion, but because of the games and movie nights,” said Danielle, who finds encouragement by attending regular youth rallies throughout Montana.
After moving to Eureka six years ago, the Smiths commuted for about a year to the closest Church of Christ — the 175-member congregation in Kalispell, Mont., near Glacier National Park, about 65 miles away.
But the distance created too much of a barrier.
“You can go on Sunday, but you really can’t be a part of the congregation,” Michelle Smith said. “You can’t do anything in the middle of the week. You spend all your time on the road.”
So a few years ago, the family planted the church in Eureka.
The Smiths welcomed help and support from committed Christians in the region, including Bill Brown, a retiree and Sojourner from Oregon; Clifford Utter, a rancher and preacher from Idaho; and Chuck Watts, a leader at the Glacier church in Columbia Falls, Mont.
“I wish we could support them more as they seek a minister and permanent building, but it’s a start,” Watts said.
Utter said he’d love to see a vocational minister move to Eureka, find a job to support his family and help build the church. “This would be a beautiful place to raise children, but they’d have to work,” Utter said.
Members pray that God will open doors.
“We’re doing it right, but it sure is hard,” Rex Smith said. “If we were the Catholic Church, Rome could set us up” with a minister and permanent building.