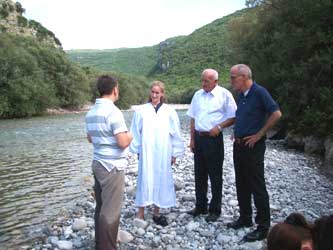 Where there is no Church of Christ: Ministry reports baptism in Montenegro

Bledi Valca speaks to Marsida before her baptism in Montenegro. Watching are her father, Gjovalin, and Tom Bonner, a missionary in Lushnja, Albania. (Photo via www.weiady.org)

I get a giddy little thrill when I write something about a country that I previously haven’t had a chance to write about.
Such is the case with Montenegro — a nation of 624,000 souls on the Adriatic Sea, bordering Albania, Kosovo, Serbia and Bosnia-Herzegovina. Part of the reason I haven’t written about it is the fact that it’s only been an independent nation since May 2006. Before that, it was part of a confederation known as Serbia and Montenegro. I have written about that nation, since there is a Church of Christ in Belgrade (now the capital of the independent nation of Serbia).
Montenegro has no known Churches of Christ. I confirmed that with a member of the church in Belgrade, who also told me that, in a recent census, only a handful of Montenegrins (that’s what citizens of Montenegro are called — I looked it up) identify themselves as “evangelicals.” I’m not even sure that we have had a baptism in Montenegro — at least not until July 19, 2010.
That’s the day when a young woman named Marsida was baptized in the Cen River by Bledi Valca, a minister for a Church of Christ in Tirana, Albania. Marsida studied English through World English Institute, or WEI, a church-supported ministry launched by Dick Ady. (See our 2005 interview with Dick about the ministry.) Marsida’s WEI teacher was Jo Byrd Huddleston, a church member in Arkansas.
Marsida’s baptism ended up being a birthday present for Jo Byrd, who was born on July 19. Recently, the Arkansas Christian traveled to Central Europe. She went to Tuzi, Montenegro, to meet Marsida. Accompanying her were missionary Ellen Walker and two Albanian Christians.
“On Sunday, I arranged for all of us to meet in my hotel room to have our worship service together,” Jo Byrd said. “Marsida seemed so full of joy getting to participate with other Christians.”
Read WEI’s full report.