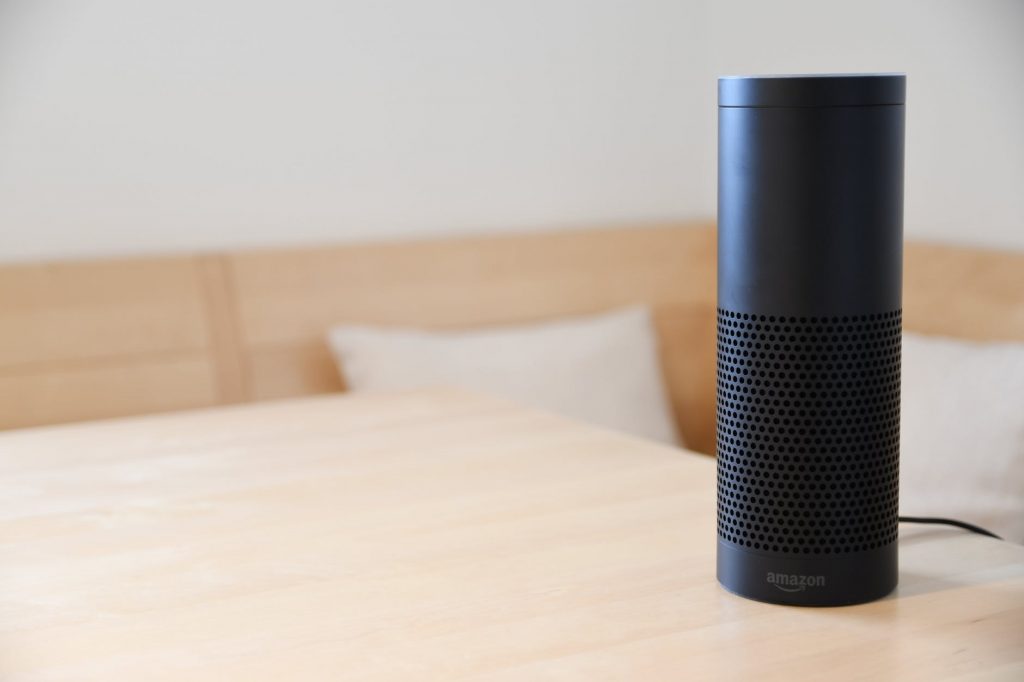 Inside Story
Photo from Fabian Hurnaus via Pexels.com
Print
Share:

In 17 years with The Christian Chronicle I’ve been blessed to report amazing stories of faith from 70 countries and territories around the globe.

(I have to say “territories” to count Puerto Rico and American Samoa. And visiting Hong Kong doesn’t really count as going to China, I’m told by travel snobs.)

Despite all this traveling to places that are not really China (I did change planes in Beijing once, but that doesn’t count either), the story I’ve written that’s likely gotten the most attention happened less than two miles from my house.

And it’s about toilet paper. 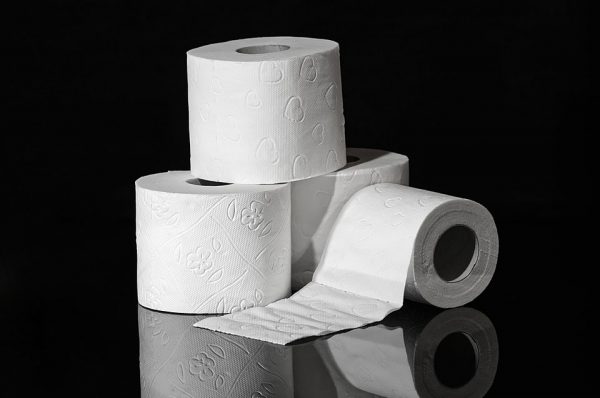 A few Sundays ago, I was listening (dutifully, of course)to Phil Brookman’s sermon during second service at my home congregation, the Memorial Road Church of Christ. Phil was preaching on the apostle Paul’s admonition from 1 Corinthians that the church should function as one body with many parts.

In the 21st century, it’s easy for Christians to live separate lives — and to fail to see the need for unity, Phil said. Even shopping has become depersonalized. Instead of going to Wal-Mart and interacting with other humans, one need only say, “Alexa, order toilet paper.”

What he said next really caught my attention.

Evidently, he had made that same illustration two hours earlier as he preached during first service. One of our members was listening at home, through the internet, and their Alexa smart speaker had answered the call, filling their Amazon shopping cart with toilet paper. 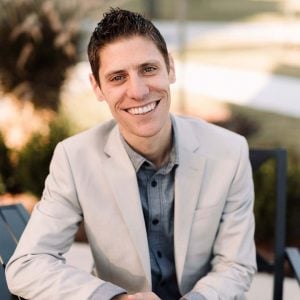 Wow! That could be a fun little page brightener for the Chronicle, I thought. I made a mental note to ask Phil who that someone was. And, like all of my mental notes, I promptly forgot it.

That night we went to our Q group Bible study at the home of our friends Wes and Bethany Becknell.

(The Q, in case you’re wondering, is from the Hebrew word qashar. It means “our church’s small-group coordinator is a Bible nerd.”)

“Did you guys go to second service?” Bethany asked. We did. “So you know about our toilet paper?”

“That was you? You’ve gotta give me a quote!” I said. (Clearly, the Lord wanted me to write this story.)

It turns out Bethany was at home Sunday with a sick child, Eli, while Wes took their other son, Cam, to early service. Bethany watched the simulcast of the service online, and just as Phil said, “Alexa, order toilet paper,” a pleasant female voice replied from the bathroom, “OK, I’ve added it to your cart.”

Bethany grabbed her phone. Sure enough, there in her Amazon cart was a package of 60 double rolls. 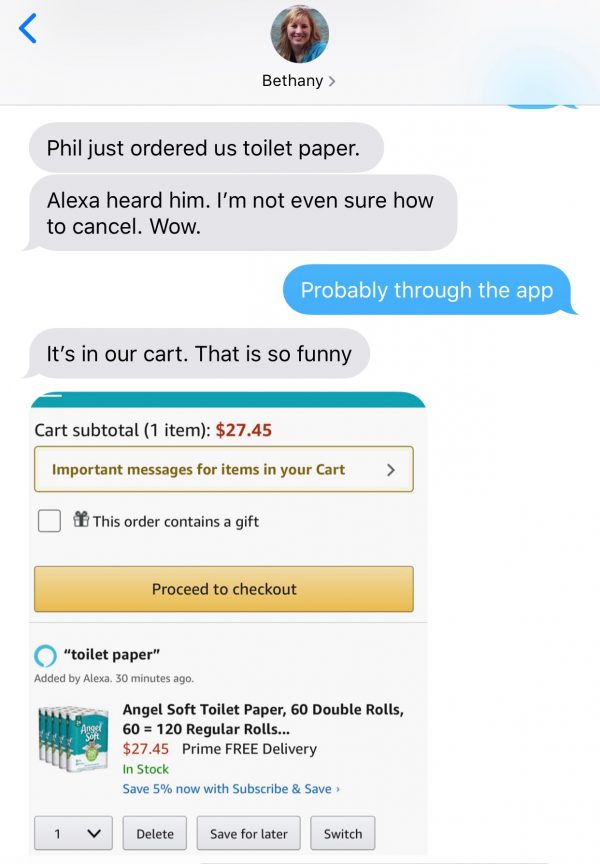 When a sermon illustration becomes a little too literal.

She figured out how to remove the item from her virtual shopping cart — but not before texting a screenshot to her husband.

For second service, Phil added a new sermon illustration: “Alexa, donate $500 to the Memorial Road Church of Christ.” No, it didn’t work.

I wrote a story about all this on Tuesday morning and posted it to our website. My coworker Bobby Ross pitched it to Religion News Service, which picked it up. By that afternoon, the story was on the website of the Salt Lake Tribune. The Baptist Standard ran it. Humor columnist Dave Barry mentioned it on his blog.

Several people told me they read the story aloud to their spouses, only to have their Alexa speakers … yep, you guessed it.

It was the story’s online comments that were truly gratifying. Several said they thought they were reading The Babylon Bee, a satirical religious news site that posts headlines like “Sad: Joel Osteen keeps getting picked last for Bible trivia.”

One reader said the TP story immediately brought a Bible verse to mind: “He will wipe away every tear” (Revelation 21:4). Another couldn’t help but think of the hymn “When the Roll is Called Up Yonder.”

Yet another pointed out the appropriateness of the toilet paper brand Alexa nearly purchased — Angel Soft.

I suppose there’s a story here about the dangers of technology that’s designed to make our lives easier, or perhaps an allegory about how every word we say is under surveillance from up above.

But what occurs to me is that I often think I have to fly off to mainland China or another faraway locale to find engaging stories for our readers. In fact, some of the most interesting tales come from our own bathrooms.

Wish I’d thought of that.

Filed under: Alexa Churches of Christ Inside Story Opinion Top Stories When the roll is called up yonder 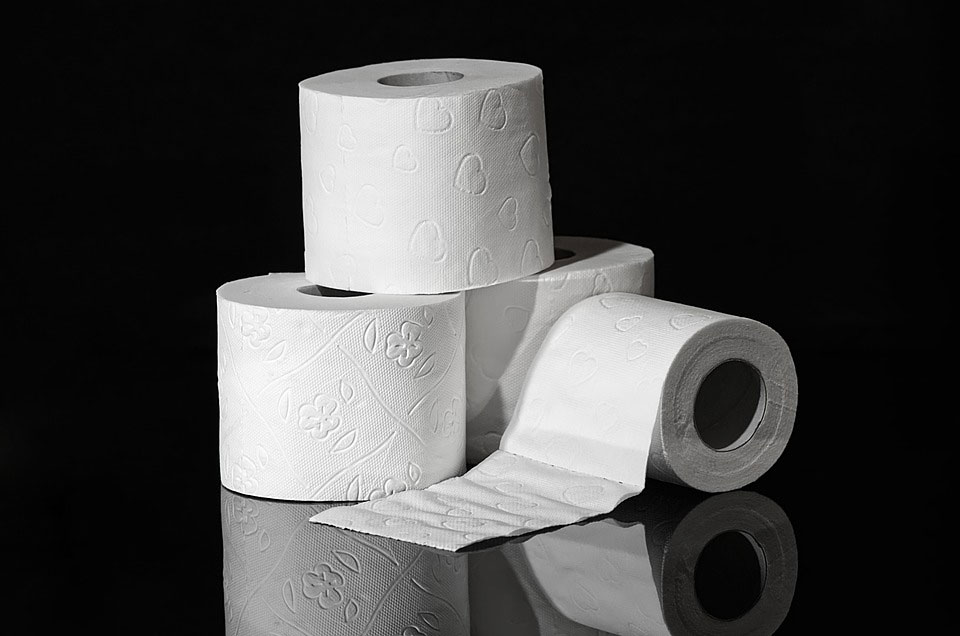 When Phil Brookman preaches, even Alexa listens — and dutifully… 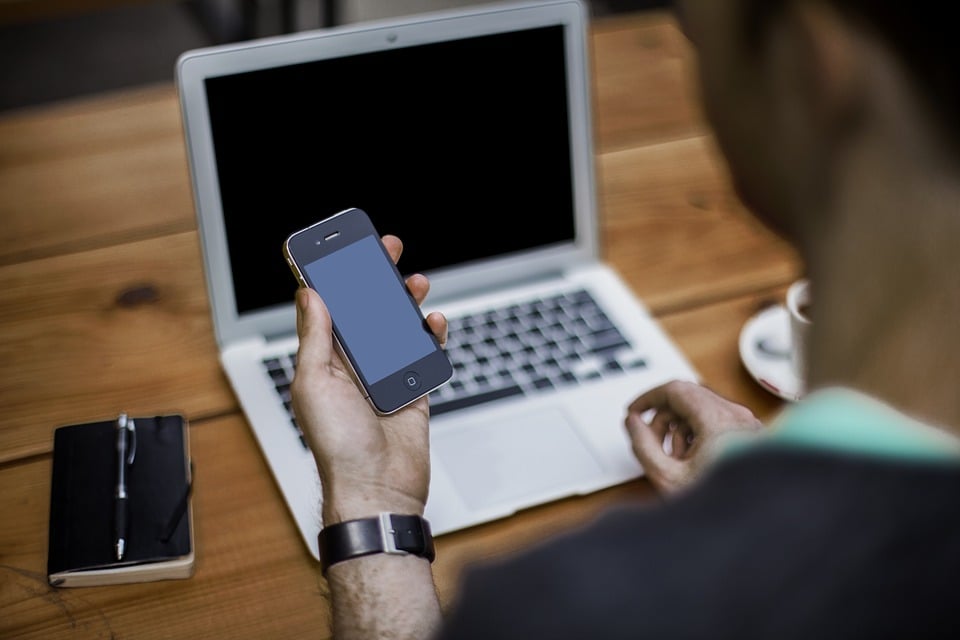