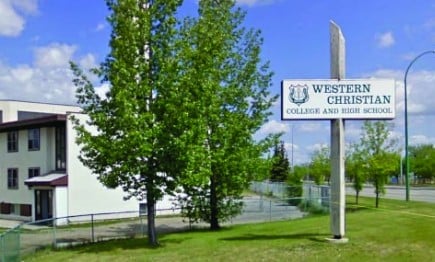 The Canadian school could not sustain itself as enrollment and donations kept falling, leaders say.

Bobby Ross Jr.
At age 16, Karen Cooper lost her mother to cancer.
The death devastated Cooper, but she eventually came to view Ivy Kristianson’s passing in a different light.
“I have learned to focus on being grateful for the 16 years and what they meant,” said Cooper, chief operating officer for Western Christian College and High School in Regina, Saskatchewan.
Now, Cooper endeavors to take that same approach as she oversees the closing of financially beleaguered Western Christian — a pillar of Churches of Christ in Canada for 67 years.
“When I talk to people, in their heads they understand,” she said of the circumstances leading to the school’s demise. “That doesn’t mean their hearts aren’t broken.”
The Western Christian Society — a governing body made up of school donors who are members of Churches of Christ — recently voted 61-2 to shut down operations at the end of June.
“An economic crisis created by a steady decline in enrollment, donors and donations over the past decade has affected our cash flow to a point where we can no longer consider Western Christian a fiscally viable entity,” academic dean Bill Schwarz said in an e-mail to The Christian Chronicle.

“It is important to state that this was a logical and necessary decision,” Schwarz added. “Our goal now is to finish our history well and be God-honoring in all we do, especially in dealing with our staff, students, vendors and creditors. Glorifying God through a necessary ending is just as important as glorifying him through new beginnings.”
Western Christian’s closure comes three years after the decision to shut down Cascade College in Portland, Ore. — also a small, financially troubled, outside-the-Bible-Belt school associated with Churches of Christ.
Rochester College in Rochester Hills, Mich. — once known as Michigan Christian College — also has struggled in recent years but has made strides to ensure its survival, as the Chronicle reported last year.
Churches of Christ in the Philadelphia area still lament the loss of Northeastern Christian Junior College in Villanova, Pa., which merged with Ohio Valley University in Vienna, W.Va., in the mid-1990s.
The end of Western Christian will leave Great Lakes Christian High School and Great Lakes Bible College — related entities in Ontario on the eastern side of Canada — as the nation’s only educational institutions associated with Churches of Christ.
“We want to express our sympathy and sadness that WCC is closing,” said Don Rose, chief administrator for Great Lakes Christian High School, which is offering tuition discounts and other incentives to help displaced Western Christian students.
LITTLE SCHOOL IN THE PRAIRIES

The dream of a Christian teacher named Lillian Torkelson, Western Christian was founded as a residential high school in 1945 in Radville, Saskatchewan.
The school relocated in 1957 to Weyburn, Saskatchewan, and later moved to Dauphin, Manitoba. It has been in Regina since 2003.
“For many years, WCC was the hub around which Churches of Christ in western Canada revolved,” said Shelley Jacobs, who grew up on the Weyburn campus, where her parents served on the staff. “Because our congregations were small and so well networked through the school, we had a very strong sense of community and connectedness with one another.
“We all knew each other and in many ways were like extended family,” said Jacobs, a member of the Northwest Church of Christ in Regina, Saskatchewan’s capital. “I can travel to any congregation in western Canada and find people there who either know my family or went to school with me or my brothers at WCC.”
A province nearly the size of Texas but with the population of Rhode Island, Saskatchewan is known for its wide-open spaces — celebrated in pop culture by the Canadian television sitcom “Corner Gas.”
In the 1940s, with no high schools in rural areas, students often left the farms and moved to larger cities to pursue education.
“In this context, it made perfect sense to start a Christian boarding high school,” said Kevin Vance, a Western Christian graduate and former president. “Sixty-seven years later, in 2012, life on the prairies is much different.
“Most people live in the cities, and the need for a private Christian boarding school has changed,” Vance said. “City congregations are larger, often have youth ministers and youth ministry programs, and large urban high schools offer academic and co-curricular options that small private schools simply cannot. All of these factors make parents more likely to keep their kids at home.”
An additional factor: the changing landscape of Churches of Christ.
A nation of about 34 million people, Canada has about 150 Churches of Christ — many separated by hundreds of miles. Combined membership totals about 7,000, a tiny fraction of that in the United States.
“Whereas our fellowship was once more sectarian, now most people in Churches of Christ are open to other fellowships, and some even see no difference, especially when it comes to choices about Christian education,” Vance said. “This means that families in Churches of Christ at a distance from the school are more likely to send their children to local, evangelical Christian schools or even colleges.
“This, coupled with the fact that there are fewer families and fewer kids in Churches of Christ in Canada, made it very difficult to sustain the enrollment at the school, at least from its traditional base.”
Still, for supporters such as LaWanda Jacobs Schneider, the decision to close is difficult to accept.
Schneider’s grandmother worked as a dorm mother and school cook. Her parents met at Western Christian. She’s a 1976 graduate herself.
“We are letting the dream of our early Canadian Christians die,” said Schneider, a member of the Saskatoon Church of Christ. “It is hard to see that happen when our forefathers had such a vision for it.”
She’s praying for God’s guidance.
“My fear is that we won’t have a common meeting place, and we will grow further apart,” she said of Churches of Christ in western Canada. “With the culture today of people not traveling around to other congregations to fellowship, not having Western as a center will just add to the segregation we are experiencing.”
HEARTACHE AND BLESSINGS

Western Christian’s high school enrollment shrunk to 74 this school year — down from a peak of 202 in 1976-77.
The Bible junior college has just one full-time student, with about a dozen students taking or auditing individual courses.
Students who identify with Churches of Christ account for just 40 percent of Western Christian’s total enrollment.
Jason Bandura, minister for the Glen Elm Church of Christ in Regina, graduated from the high school and earned a Bible degree through the college.
“Friendships formed through the school or influence spread through events like the lectureship or homecoming … are woven into the very fabric of our fellowship in Canada,” said Bandura, who met his wife, Shannon, at Western Christian. “The impact of such things may be hard to measure until long after they are gone.”
For Cooper, Western Christian’s closing hurts on a professional level — and a personal one, too.
Her father, Ivar Kristianson, now 84, spent 28 years on the school’s board — 18 as chairman.
As early as age 4 or 5, Cooper recalls running around campus. She attended youth rallies at Western Christian. In the 1980s, she enrolled as a student.
“I just lived to go to Western,” she said.
She spent 20 years in Ontario but trekked back west so her daughters could experience Western Christian.
Daughter Jessica, 20, finished her studies in 2010.
Daughter Rachel, 18, will graduate this spring with the final senior class.
A final homecoming weekend, set for March 30-April 1, will feature alumni hockey, basketball and volleyball as well as reunions and class parties.
In the meantime, Cooper works to raise $800,000 to end the final year in the black.
“I’m done asking the ‘why’ and ‘what if’ questions,” she said. “I’ve entered the phase of gratitude and blessing and trust that God means for us to be exactly where we are.”
TO DONATE, see www.westernchristian.ca.

Filed under: The Church in Canada