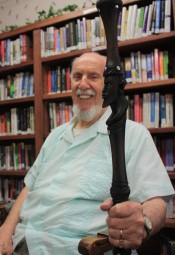 Broom, a former missionary to Nigeria, was a tireless advocate for missions and church-planting in Africa. In 2009, as The Christian Chronicle launched “Global South,” a series detailing the rapid growth of Churches of Christ in the non-Western world, Broom spoke about the reasons for the continent’s receptivity to the Gospel:

“Africa is hungering and thirsting, weeping and mourning. Jesus says they are blessed. So they receive the message of Christ. They were living in desperation, and they accepted the hope they received in Jesus.

“In the West, we are fat and full, and we have everything a people could need. And the church is dying in our laps.”

Additional biographical information from our 2009 Dialogue with Broom:

Wendell Broom remembers when missionary Howard Horton asked him to move to Nigeria.
“I thought that was the dumbest thing I’d ever heard,” Broom said.
The young minister sat down to write Horton a letter expressing just how bad an idea it was, but after several drafts he decided that he couldn’t think of a good reason not to go.
So, in 1955, he and his family moved to the West African nation and served for five years. During that time he took teams of evangelists to help plant churches in Cameroon and Ghana.
In the decades since, Broom has advocated tirelessly for missions in Africa and around the globe. As a professor at Abilene Christian University, he helped establish missionary training programs.
He helped launch the Teachers of Missions Workshop in the 1970s and the Africans Claiming Africa for Christ conference in the 1990s.
Broom was born in Oklahoma City. “It is reported to me that the first Sunday she was home from the hospital, my mother had me in Sunday school,” he said.
During 60-plus years of ministry Broom also preached for churches in the Northeast and Hawaii.