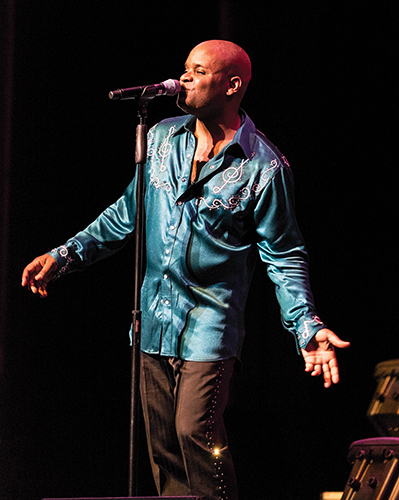 After 15 years as 'Black Diamond,' being a tribute artist ‘is well with my soul,’ says Theron Denson. He marvels at how God can take something ‘almost laughable’ and use it for his glory.

“When peace like a river attendeth my way, when sorrows like sea billows roll, whatever my lot, thou hast taught me to say, it is well, it is well with my soul.”

But the man pouring his soul into the classic hymn in the Riverwood Church of Christ’s basement is most decidedly not Neil Diamond.

“This is one of the songs the ladies would hear me singing and say, ‘Oh my goodness! Young man, do you realize you sound like Neil Diamond, honey?’” Theron Denson said, remembering life as an 11-year-old in the pews of a Missouri church. “I was like, ‘Who’s Neil Diamond? Does he go to church here?’” 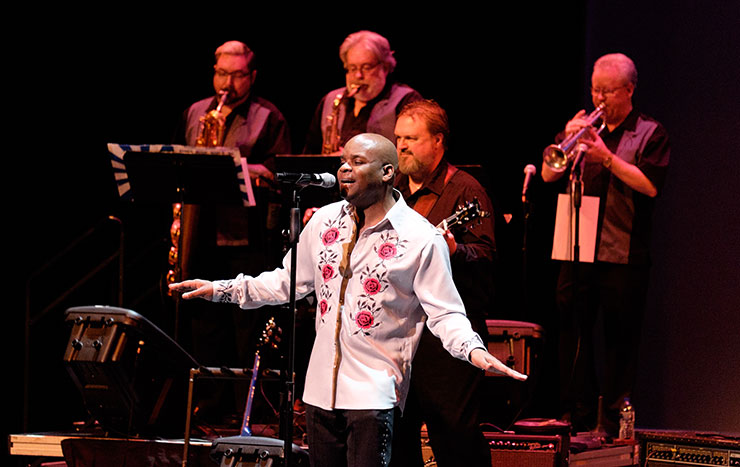 Now Denson tours the country as Black Diamond, an African-American Neil Diamond tribute artist. When he’s not belting out “Forever in Blue Jeans,” “Shilo” and “Sweet Caroline,” he lifts his voice to the Lord.

“It Is Well With My Soul” remains his favorite hymn, he says. After years of uncertainty and wavering faith, “that song moves me and touches me beyond all description.”
‘Where it began …’
In 1964, as a young, unknown Neil Diamond struggled to live on 35 cents per day as a songwriter, Denson was born into a military family.

While his father was stationed at Fort Leonard Wood in Missouri, Denson rode a “JOY bus” to the nearby Waynesville Church of Christ. His school’s principal, Marvin Pendleton, was a church deacon — and the bus driver. After church, Pendleton took the kids to a convenience store and gave them each a dime to buy “as much candy as you could possibly get.” 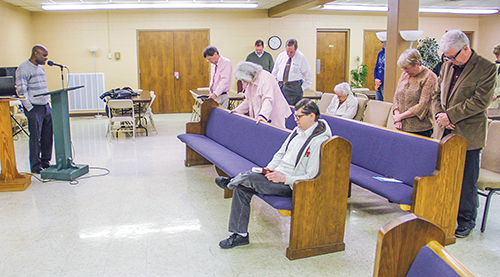 Theron Denson leads a closing prayer during Sunday evening worship with the Riverwood Church of Christ in Nashville, Tenn. Denson moved to Nashville in 2011. (PHOTO BY ERIK TRYGGESTAD)

“I probably initially went for the dime and the store afterwards,” Denson said, “but God took hold of me in that process.”

He was baptized at age 10. By then, Neil Diamond was a household name. As church members started comparing Denson to his vocal doppleganger, the young Christian became interested in his music.

Meanwhile, the church’s minister, Dick Stovall, “mentored me in so many ways about what it meant to be a Christian man,” Denson said. That meant teaching him how to take communion — and leave some unleavened bread for the other Christians, he recalled with a laugh.

Stovall also taught him to preach.

Denson delivered his first sermon at age 12 to inmates at the Pulaski County Jail, where the church had a prison ministry.

He thought he’d be a preacher — not a singer — and studied at Oklahoma Christian University in Oklahoma City. He later moved to Pepperdine University in California but soon lost his focus.

He moved from Colorado to Utah to New Mexico, “just wherever Greyhound would take me … trying to find my place,” he recalls. “I really was drifting.”

Eventually, he ended up in his parents’ home state, West Virginia, working at the front desk of a hotel. He noticed that many guests seemed irritated as they handed him their credit cards — likely because of the high-priced rooms, he guessed.

“As I gave them their room keys, I’d say, ‘Tell me who this sounds like — Hello, again, hello …’ I took pride in turning that frown into a smile before they went off to their rooms.”

The hotel’s managers weren’t smiling. They told him to stop singing or look for other employment.

“Singing is like breathing to me,” he told them as he resigned.

“I looked up in heaven and I said, ‘Well, God, it looks like it’s you and me and Neil Diamond now, and I pray that this will work.”
THE GREAT ‘I AM … I SAID’


He started performing in whatever venues he could find. In Charleston, W.Va., he spent Thursday nights singing at a pizza parlor “for $50 and all the pizza I could eat,” he said.

There, in 2003, a businessman from Los Angeles caught his act and passed his name along to his friend, a producer for “Jimmy Kimmel Live.” The late-night comedian flew Denson to California to sing on the show — and then took him bowling.

“He was genuinely enthralled,” Denson said, “rooting for my success and pulling for this to take off.”

Kimmel advised Denson to move to Las Vegas and start a tribute show. As Denson prepared for the move, his father died. His plans — and his faith — were derailed. Several years earlier he had stopped attending church. He began to drift again, eventually moving to Kalamazoo, Mich. To his surprise, the predominantly white community embraced Black Diamond. 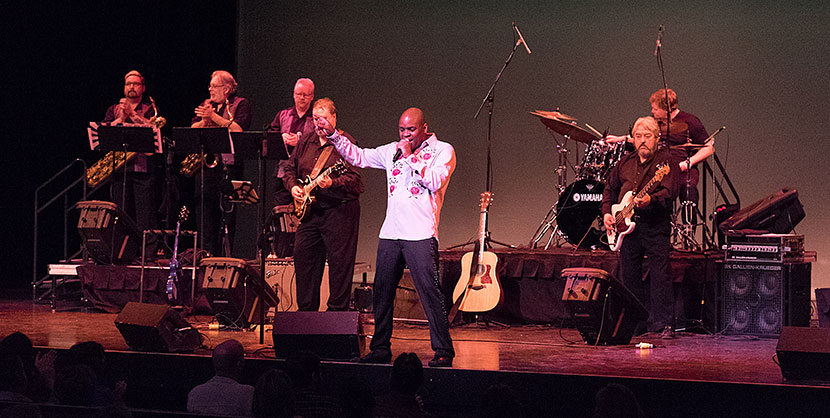 He was equally surprised when one of his neighbors invited him to worship — with the East Main Church of Christ — in 2006. Denson resisted, but finally consented to a visit.

“My plan was to just go one time and that way he’ll stop asking me,” Denson said. “But that very first time ended up being my reunion with the church. The people were so warm and embracing. They never let go of me from that very first visit.

“The very next day I was getting phone calls … asking what they could do, how they could serve me.”

Ever since, he said, he’s stayed faithful to the church.

The musicians who perform alongside him know of his faith, including Faun Pointer, whose mother, Ruth, is one of the Pointer Sisters. Black Diamond has opened for the famous rhythm and blues artists.

“Theron is an absolute gem,” Faun Pointer told The Christian Chronicle, “and the Churches of Christ are blessed to have his commitment for sure.”
‘SING A SONG OF SONGS’
Eventually, Denson found his way to Las Vegas, but Sin City didn’t embrace his act. He returned to West Virginia and performed at fundraisers for church-supported ministries.

In Vienna, W.Va., he sang at the inauguration of Harold Shank as president of Ohio Valley University, associated with Churches of Christ.

He thought about putting Black Diamond aside. After 10 years, “maybe it’s time to get a real job and join the real world,” he thought.

Then he got a phone call from “King Errisson” Johnson, a renowned percussionist who has performed with Sammy Davis Jr., Ringo Starr and Barbra Streisand, to name a few. He’s also been a member of Neil Diamond’s touring band since 1976.

Before you give up, try Nashville, Johnson told him. Though known for cowboy hats and country music, Neil Diamond has a huge fan base there.

After one more Greyhound ride, Denson was in Music City.

Here, he’s found new audiences for his music — and a new family at the Riverwood Church of Christ.

“He just appeared,” joked Marsha Boehm, whose husband, Rod, is an elder of the 270-member congregation. The church has a long history of involvement with inner-city ministry, and Denson volunteers with fellow church members on Tuesday nights.

Denson recalls his days as a child, riding the JOY bus to church, and wants to give a new generation a positive role model.

“I hope it puts them on the path that I was put on as a youngster,” he said.

Longtime church members, including Terry and Claudia Carilon, said they can’t help but grin at the raised eyebrows when they tell friends they have a Neil Diamond impersonator in their church.

Denson performs at church events, including a recent “Young at Heart” banquet. David Fowlkes, the banquet’s organizer, said, “You can’t meet him and not like him.”

When he worships, however, “it’s all the Lord,” she said. “He never promotes himself at the church.”

After 15 years as Black Diamond, Denson said he marvels at how “God can take something that seems almost laughable or insignificant and, for his glory, make it something very significant.

“There have been many times I’ve looked up and said, ‘God, really? Black Neil Diamond, really? … I can’t be a teacher or a lawyer or a policeman or an astronaut or a fireman?’

“His answer has always been the same: ‘It’s not for you to question. I just need you to do.’”