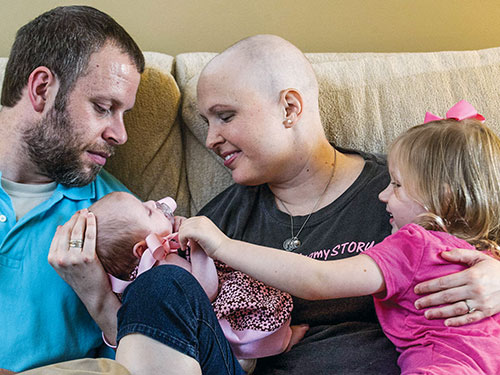 ‘We trusted God, and he delivered’

Breast cancer survivor and church resource coordinator gives birth to healthy baby during chemotherapy
Kym Klass
PRATTVILLE, Ala. — Katie Smith Griffies remembers it feeling like a cocoon in the delivery room while giving birth to her second daughter, Annaline.

Surrounded by her medical team, with husband Matt at her side, she remembers seeing her doctor whisper something to her husband, just as they welcomed Annaline into the world.

Then Matt turned to his wife, saying: “Baby, she has hair.”

And the room — Katie, Matt, the doctor, nurses — began to cry.

Katie, children’s resource coordinator for the Prattville Church of Christ, was bald when she delivered, having recently undergone four rounds of chemotherapy while fighting Stage 3 breast cancer.

“We trusted God, and he delivered,” Katie said. “Our baby is safe, and she is fine. And I’m safe, and I’m fine. … It was just all of those weeks of worry and fear and not knowing if you’re not making the right decisions. … 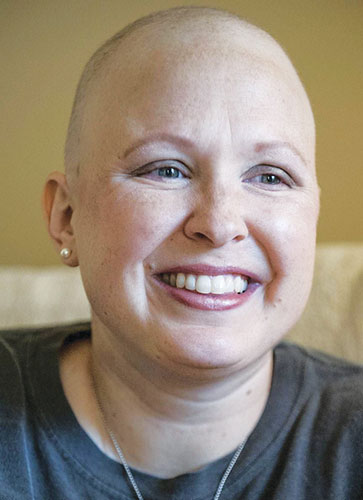 In a video for the Montgomery Advertiser, Katie Smith Griffies offers words of encouragement to those recently diagnosed with cancer. Following are excerpts from her testimonial:
“If you’ve just heard you have breast cancer, you probably feel as though you’ve been given a death sentence. But let me tell you, what you’ve actually been given is a beautiful blessing.
“Because of cancer, I live a more intentional life. I love more deeply, and I find joy in each little blessing I’m given throughout every day.
“The plans I had for my life were gonna be pretty amazing, I’ve gotta admit. But God has taken them, inserted his mighty hand and given me an awe-inspiring life that can only come through his perfect eyes, even if it is speckled with a little bit of cancer. All I had to do is trust him, and that’s all you need to do, too.”
Watch the video and read the original story.
Katie, 31, has a great-aunt who had breast cancer. So did her aunt. Both are on her maternal side. And her mother had uterine cancer. But when she underwent a genetic test, her results were negative for mutations in two genes that can contribute to breast or ovarian cancers.

Her first daughter, Bella, is 4 years old. About five weeks into her pregnancy with her second daughter, Katie felt a lump in her breast. Her doctor examined it.

It was hard, round and movable — likely a benign fibro adenoma similar to one she had at age 17.

Fast-forward to 27 weeks into her pregnancy, and she felt as though the lump grew overnight.

“I mean, it just grew,” Katie said. “It was protruding out of my bra. It had almost encompassed my breast. It had started hurting. My skin started changing. It started looking like an orange peel. It got very different, very fast.”

Her doctor scheduled her for biopsies at a surgeon’s office.

“I pull up to this building, and it is pink. Everything is pink,” she said. “In that moment, I’m like, ‘this is really happening.’”

She described herself as a “person that is very organized,” though some might call it controlling, she acknowledged. Now she was facing a problem far beyond her control.

What followed was “a peace I have never felt before. But it just washed over me … like he said, ‘You are going to be OK. Just trust me.’

After the biopsies, 29 weeks into her pregnancy, she was diagnosed with Stage 3 inflammatory breast cancer.
LOSING HAIR — AND COMPOSURE
Things moved fast after her diagnosis. She opted to forgo Taxotere, a mild treatment that gets a person’s body used to chemotherapy but could pass through the placenta and reach Annaline. She went directly onto Adriamycin and Cytoxan — a stronger regimen, but one that doesn’t pass the placenta.

“The only reason we agreed to do it was because we knew it absolutely would not touch (Annaline),” Katie said. “And it was just one of those faith things.”

Katie and her husband made sure she had an ultrasound every week to check on the baby — her breathing, her movements, fluids.

“In my mind, if she was keeping her hair, the chemo was not touching her,” Katie said.

Katie, however, lost her hair — and endured strange looks from those she passed. She understood their concern but felt she was being judged. “How dare you put yourself above your child.”

“There were times when I would boo-hoo because people are looking at you like you’re crazy,” she said. “You’re obviously going through chemo, and you’re obviously very pregnant.”

What was hardest for Matt Griffies was not knowing what was happening inside his wife. Still, “she always seemed to have this assurance about it,” he said. “I just fed off that.

“It’s scary enough when you have one person ingesting this medicine, and now, basically, it’s two. So it definitely was an added stressor.

When he first learned about the cancer, “I felt like I couldn’t cry around her,” he said. “I felt I needed to be strong. I remember vividly going on that back porch near that tree and … I just lost it.

“But I talked to her brother-in-law, and he had gone through something similar with his wife when she had a brain tumor, and someone had told him that it’s actually best that you do cry in front of them because it makes them feel that you’re connected in the situation — and that you’re vulnerable, too.”
‘God is writing my story’
After Annaline was born — with hair — Katie underwent a double mastectomy. The surgery was on a Friday, and the next Wednesday she was back at church, said Brent Missildine, pulpit minister for the 400-member Prattville congregation.

Katie, who works part-time for the church, has continued in many duties that other church members offered to take on after the diagnosis, the minster added.

On her blog, “A Lump and a Bump,” she updates her cancer battle. A recent pathology report showed she is “cancer-free as far as any doctor or test can tell,” she wrote, though she’s continuing radiation treatments to lessen the chance of recurrence.

“I have never felt the love of God and his people so strongly before,” she wrote, ending her post with the hashtag #Godiswritingmystory.

Even before her diagnosis, she was an inspiration to her church family, Missildine said.

Now, “the thing that I see in Katie, she feels that God has not brought this upon her, but has chosen her for this journey,” he said. “She is determined that she is going to use it for God’s glory.”