‘We realized we’re all just people’

When black and white churches got together in Houston, preconceptions about each other dissolved, their ministers say.

Lynn McMillon
President Emeritus
As shootings and protests heighten racial tensions across the U.S., Churches of Christ in the nation’s fourth most populous city, Houston, strive to break down barriers of ethnicity — thanks in part to the actions of ministers such as Gary Smith and David Duncan. 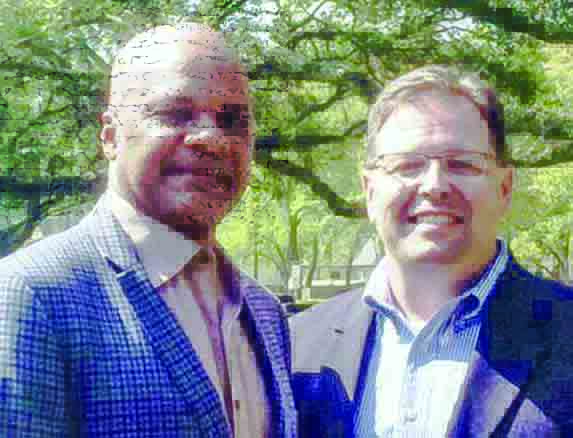 Ministers Gary Smith and David Duncan strive to show cross cultural unity to Houston. (PHOTO BY ANDRE BERRY)The two met for the first time over lunch in 2006. Duncan, a former missionary to Brazil, had just moved to Houston to serve the Memorial Church of Christ, a 1,000-member, predominantly white church. Smith has worked with the Fifth Ward Church of Christ — a 1,250-member, predominantly black congregation that meets 20 minutes west of the Memorial church — since 1990.

The ministers talked about how to bring the two churches closer together. Members began visiting each other’s congregation.

Eventually, they launched the Campaign for Christ, a soul-winning gospel meeting, evangelism and community service effort that takes place every two years. The most recent campaign was Aug. 20-21. Launched in 2010, the campaign now involves more than 50 area congregations — black, white and Hispanic. You may also enjoy:
•   What a uniformed officer in the Bible teaches us about today’s interactions
•   A fishing trip to racial harmony
What have your congregations done to get to know each other?
Smith: Twice a year we exchange fellowships. Our entire congregation meets with the Memorial congregation, and I preach. Then the Memorial church comes to us and fellowships at the Fifth Ward church, and David preaches.

Fifth Ward has a day when we give out all the food for Thanksgiving meals to families. We’ve had families from Memorial go and help distribute those meals. We have a big marriage retreat that couples from both churches attend. We try to complement each other.

Duncan: And every other year we have the Campaign for Christ. There are evenings of singing and preaching and a Day of Good Works. We hand out backpacks and do blood-pressure checks. For those who may need an immigration attorney, we have attorneys on site to help with that. There’s a place to donate blood. We provide a number of free counseling services to the community. Elders and counselors are available to pray and teach individuals the Gospel on that same day.

So that’s a huge day. In the past four years we’ve assisted 2,000 to 3,000 non-members during that Day of Good Works.
What preconceived ideas that members of the two churches had about each other have proven to be false?
Smith: I can give a humorous one. I think maybe even before David came here, our congregation fellowshiped with Memorial on one or two occasions. Being a predominately African-American congregation and going to Memorial, we thought we were going to deal with the elite — those in the high-income bracket. And though our members did not say it out loud, I think it was one of the preconceived ideas many had.

Instead, we found the Memorial members to be so down-to-earth and amenable — and that was a very pleasant surprise for us.

Duncan: When we visited Fifth Ward, some of our members thought (though no one said it) that we were going to a poor part of the city. I can remember people saying that night as they picked up the church bulletin, “Wow, look how high their budget is.”

Sometimes we assume if one is white they are wealthy and if one is black they are poor.

We realized we’re all just people.
What other hurdles have you encountered in these cross-cultural efforts?
Smith: Acknowledging differences in our worship styles. I told David he would hear a lot of “amens” at Fifth Ward, and David told me I wouldn’t hear them at Memorial.

When we go to worship on Sunday evenings, many of our members still have suits and ties on. And David told us, “Listen, our folks are going to dress in jeans or whatever they have on.” In times past that might have been an issue with some of our members, but not now.

We stress to our members that the Christians from Memorial are our guests. We are brothers and sisters in Christ. We’re not judging, prejudging or trying to make demands on anybody. We’re going to be hospitable. David and I communicate about these things, and we’re comfortable saying to each other, “This is what we can expect, so let’s lead by example.”

Duncan: I think there are always hurdles, but I feel that visiting each other’s congregations has gone over fairly smoothly.

The difficulty has been trying to take this to more congregations in the city. I think what I’ve learned and seen is that many of the black preachers are very straightforward and direct, and many of the white preachers are more indirect.
Describe some key benefits that your congregations have gained from these efforts.
Smith: Education is one of the key benefits. I know of some other congregations who have also started sharing fellowships and are learning about each other.

With regard to the Campaign for Christ, I originally said that I didn’t want to get involved unless we could include more diversity in the planning part of the campaign.

I think that, as a result of Memorial and Fifth Ward already having an ongoing fellowship, more congregations of different races — white, black and Hispanic — have gotten involved in the campaign. That probably wouldn’t have happened had we just said, “We’re going to call a meeting, and we want everybody to come.” Instead, we said, “Listen, we can work together. We can do this. We can plan it together, and we can come together.”
That has been a great benefit.

Duncan: Another benefit is experiencing real moments of joy when nationally there is a lot of bad news. We experience this joy not only in the moment but also when we look back. When something bad is happening in the news and we can’t think of anything good to say about it, we can say something like, “Wasn’t that fun the last time we got with Fifth Ward?” And we’ll smile and recall a memory that’s centered on the Lord and the church — a moment when we were united in Christ.

Working in a multiracial, multigenerational effort is difficult. At the same time, there’s nothing that has greater value or looks more like the body of Christ than a multiracial, multigenerational event.
In view of recent national events, what do you suggest as constructive ways Christians can address tensions between races and law enforcement?
Duncan: Police and citizens must get to know each other in non-threatening settings, and the church can be a catalyst for such events.
Memorial recently hosted a lunch for first responders where members could visit with them in a relaxed atmosphere.

On the Sunday after the Dallas tragedy, Gary sent a video to Memorial to be shown at the beginning of our service, and I sent one to Fifth Ward that was shown there to declare our love and solidarity.

Smith: We are planning an open-forum dialogue session with the peace officers of our community and all ethnic groups.

My suggestion is for Christians to make the first move to demonstrate support, tolerance and a willingness to dialogue with all races.

Website: www.houstonchurchesofchrist.org
From the archives:
Churches cross racial divide as they serve