In the nation's poorest metro area, a Christian ministry trains former inmates to succeed at work — and life.

Bobby Ross Jr.
Editor-in-Chief
MEMPHIS, Tenn. — In a room at the Midtown Church of Christ, a dozen men bow to pray each weekday morning.

“It’s just something I added to relieve a little physical stress,” teacher Antonio Owens — known to his students as “Tough Love Tony” — said of the exercise regimen.

These men — most convicted felons who spent years behind bars — know a little something about stress, as do the women studying down the hall with senior teacher and counselor Laura Harrison.

“I’m trying to get myself headed in a brand-new direction,” said Joshua Banks, a repeat offender who served nine years in prison. “I know I can’t start over, but I can make this a new beginning.”

Banks credits his chance for a new beginning to HopeWorks, a Memphis job-training ministry associated with Churches of Christ. 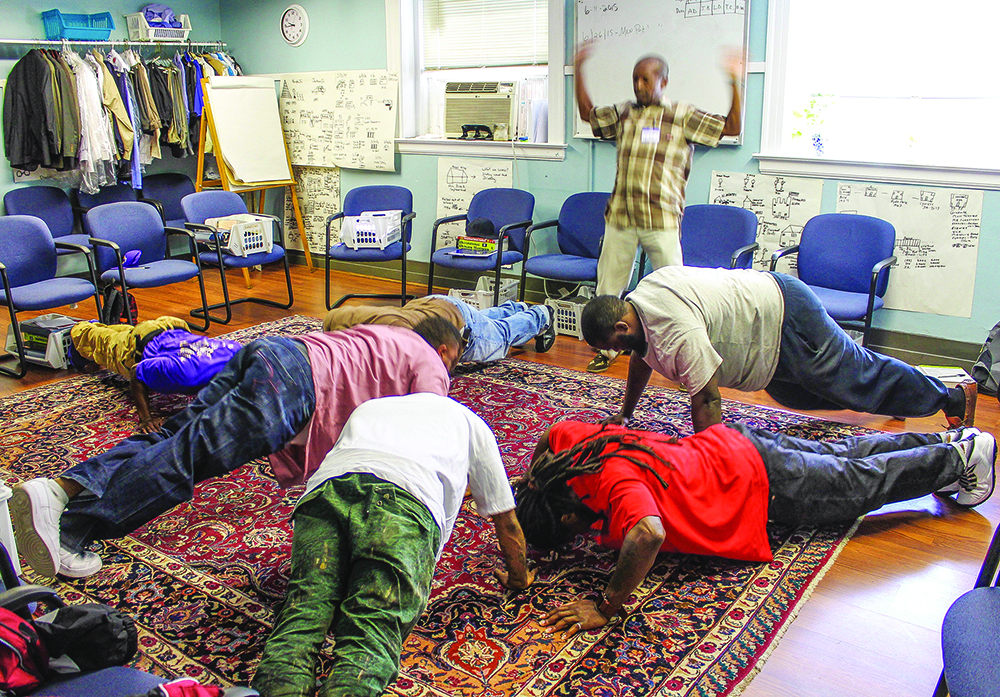 For men enrolled in HopeWorks, a faith-based job-training ministry in Memphis, Tenn., physical as well as spiritual training is part of the daily regimen. That includes pushups. (PHOTO BY BOBBY ROSS JR.)

The program, which traces its roots to Christians who came together in the late 1980s to fight homelessness, has graduated more than 1,000 students since 1998.

HopeWorks’ success in helping former inmates was highlighted during the recent 42nd annual National Jail and Prison Ministry Workshop, hosted by the Highland Church of Christ in Cordova, Tenn., east of Memphis.

“The government cannot do it all,” Wharton told the roughly 250 workshop attendees. “You can touch the spirit in the way that we cannot.”

‘WE WORK ON THE PERSON’

A majority-black city of 650,000 residents, Memphis touts itself as “the Birthplace of Rock ’n’ Roll and the Home of the Blues.”

However, the ghost of Elvis on Union Avenue — where the Midtown church is located — sings his share of sad songs in a metro area that The Associated Press last year characterized as the poorest in the nation.

More than one out of every four Memphis residents — 26.9 percent — lives below the federal poverty level, according to U.S. census data. 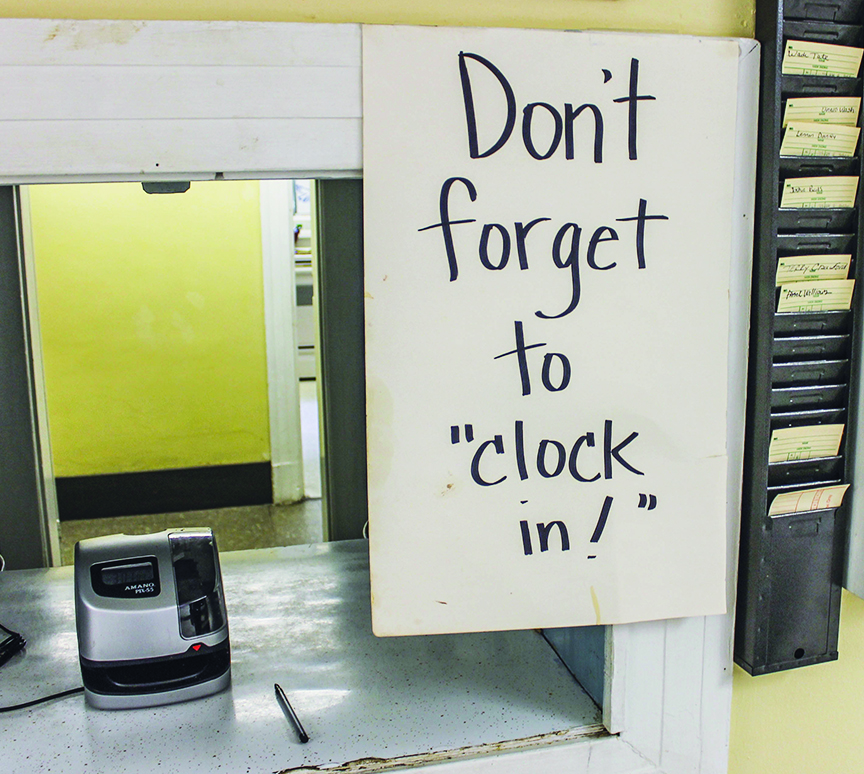 HopeWorks students “clock in” daily and must maintain regular attendance to remain in the job-training program. (PHOTO BY BOBBY ROSS JR.)“You hungry or you ain’t ate in two to three days — you’re going to do something to get some food,” the HopeWorks student said. “Eating out of the garbage can ain’t for everybody.”

But he was quick to add: “There’s a better way to do it, though, than going out there (stealing) or going out there selling illegal substances. You’ve just got to surround yourself around positive people. That’s what a lot of people don’t realize.”

It’s a lesson that HopeWorks — a 14-week program that requires students to pass random drug tests and “clock in” from 9 a.m. to 4 p.m. most weekdays — has helped Banks learn.

Housed at the Midtown building, the Christian nonprofit emphasizes personal and spiritual development as it prepares students — 57 percent of whom have criminal backgrounds — to enter the employment market.

“We work on the person,” said Owens, a one-time drug addict who was arrested 30-plus times for offenses ranging from assault to robbery before finding HopeWorks in 2002. “If you give a gangster a job and don’t change his mindset, you don’t know what he may do with the money from the first paycheck he gets.”

SERVING THOSE WHO SERVED TIME

HopeWorks’ emphasis on former inmates reflects a desire to reverse the nation’s high rate of recidivism — one changed soul at a time.

Of 405,000 prisoners released in 30 states in 2005, an estimated three-quarters — or 77 percent — were arrested again within five years, the U.S. Bureau of Justice Statistics reported last year.

“In Shelby County, one chaplain told me that 80 percent of the men that are arrested and go to jail come back,” said Ron Wade, HopeWorks’ executive director. “We tell the people in prison to come to HopeWorks, and we’ll try and help them out.”

But across the nation, Churches of Christ do a better job of baptizing inmates behind bars than helping ex-convicts succeed outside prison walls, participants said during the national workshop. 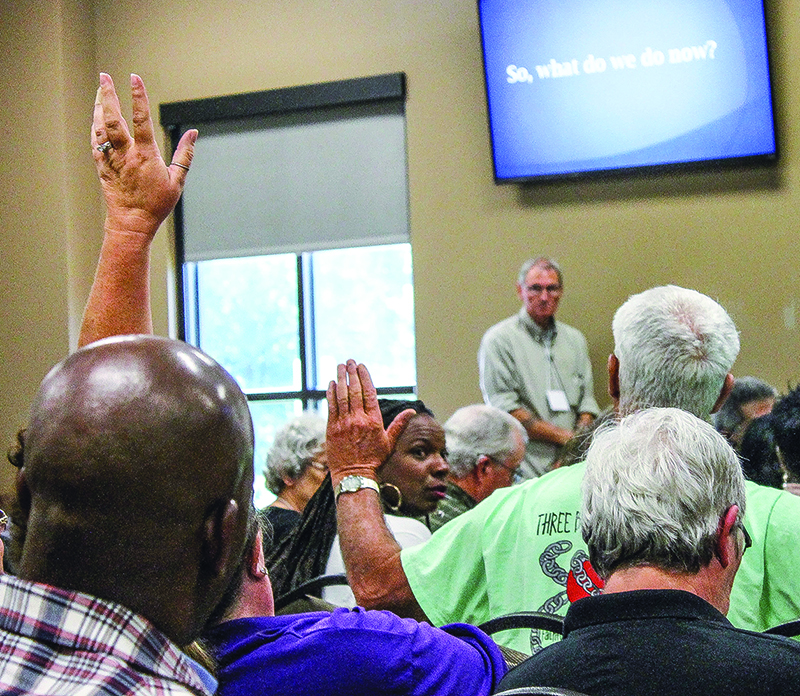 “If you don’t have someone to help you (outside prison), it’s a vicious cycle,” said Vernon Perry, who served 13 years in Colorado, Mississippi and Tennessee prisons.

“My reason for success is God. He came down, and he touched me,” added Perry, who coordinates the White Station Church of Christ prison ministry and works in the Harding School of Theology maintenance department, both in Memphis.

Former inmates may not even realize they need to be saved, said Cedric Ivory, a former prisoner who serves as minister for the Crescent City Church of Christ in New Orleans. 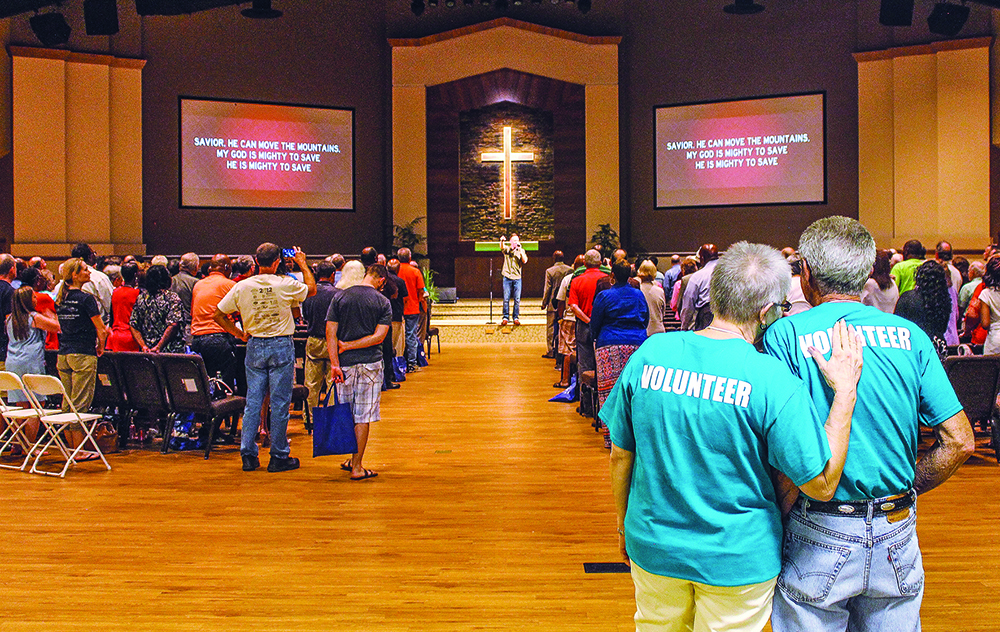 Volunteer Gwen Coker leans against her husband, Bob, as attendees sing “Mighty to Save” during the national workshop, hosted by the Highland Church of Christ in Cordova, Tenn. (PHOTO BY BOBBY ROSS JR.)

Historically, Churches of Christ have focused on leading inmates to Christ, said Thomas Snow, executive director for the Tennessee Prison Outreach Ministry, a statewide organization based in Nashville.

“We will always, I believe, maintain that as an important focus,” Snow said. “But once we lead them to Christ, then we have a responsibility to walk with them and to help them make that transition. That has been the weakest point in the ministry of the Churches of Christ.” 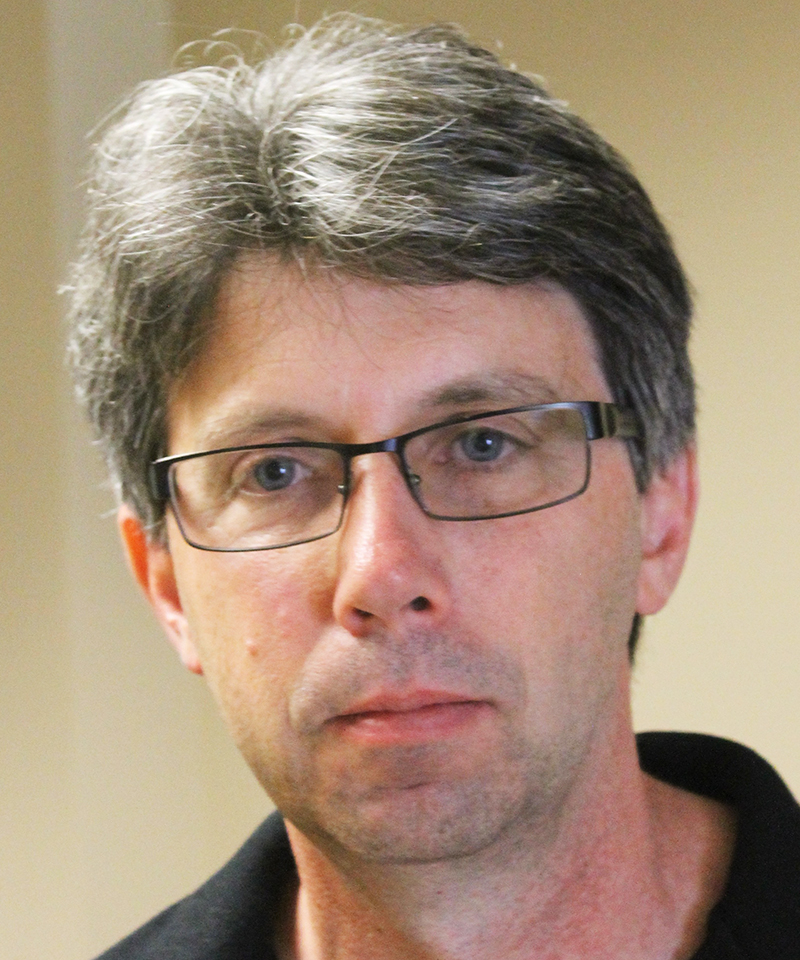 Thomas SnowHowever, Snow points to evidence of positive change — from HopeWorks’ efforts in Memphis to his own organization’s June 21 opening of a re-entry center in Nashville.

At the site of the old Rains Avenue Church of Christ in Nashville, the re-entry center will serve as a hub for job and interview training, enhanced computer readiness, life skills development and Christian mentoring, Snow said.

• Counseling offered in partnership with nearby Lipscomb University.

“It’s holistic,” Snow said of the approach. “We are trying to have housing, employment and counseling all in one area, and we’re right on the (major city) bus line.” 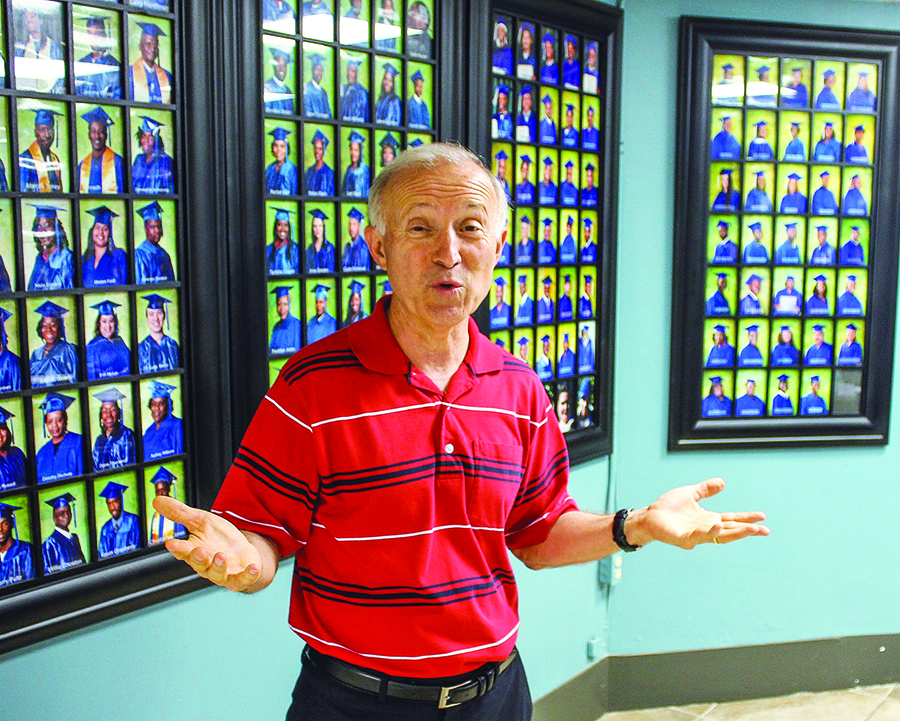 Faces of past HopeWorks graduates can be seen behind executive director Ron Wade, who left a corporate career to work full time with the ministry. (PHOTO BY BOBBY ROSS JR.)

CHANGE ‘FROM THE INSIDE OUT’

Back at HopeWorks, “life maps” adorn the walls of the men’s classroom. 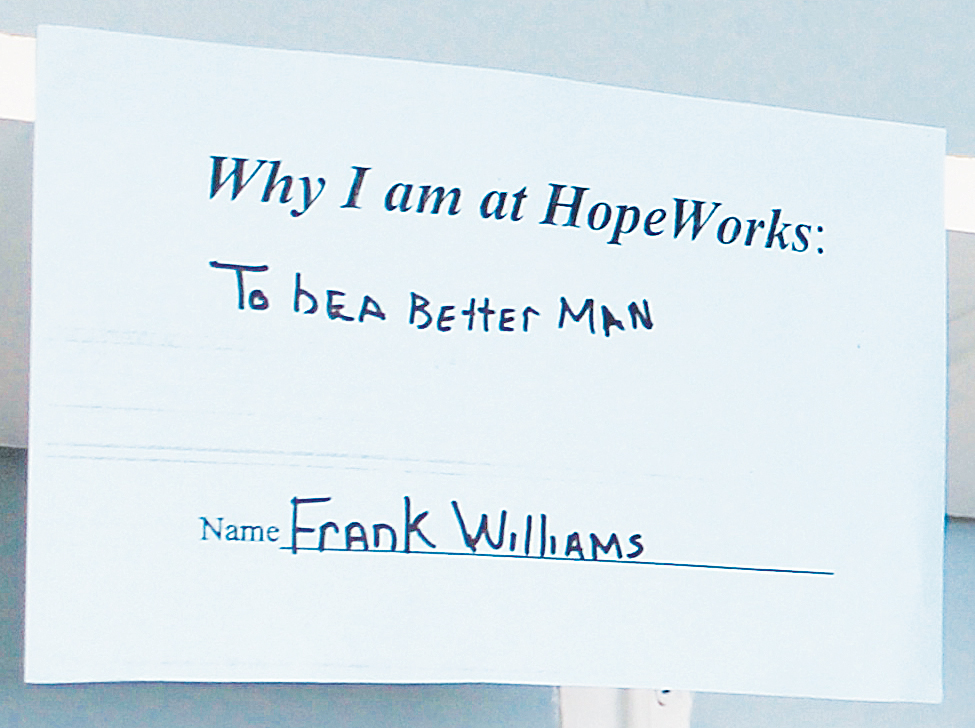 Students share their reasons for entering the prorgram. (PHOTO BY BOBBY ROSS JR.)For example, one student’s map shows a stick figure and tells the year he was born. Other scribbled markings indicate when the young man started school, when he had his first child, when he began selling drugs and when he went to jail.

“I’ve had numerous encounters with the law,” said Jamar Jordan, explaining his motivation for entering the program. “I’m just tired of constantly relapsing. And I still relapse, but my faith and my determination are greater than my relapse moments. So I’m standing firm.”

Down the hall, Dara Collins said she entered HopeWorks because she’s tired of dead-end jobs.

“It’s teaching us to have faith,” Collins said. “And my children, they say, ‘Mom, you don’t even get mad anymore.’ They say, ‘You’re so calm.’ And that’s because it’s helping me to handle myself better. … They’re trying to rebuild a person from the inside out, and I like that.” 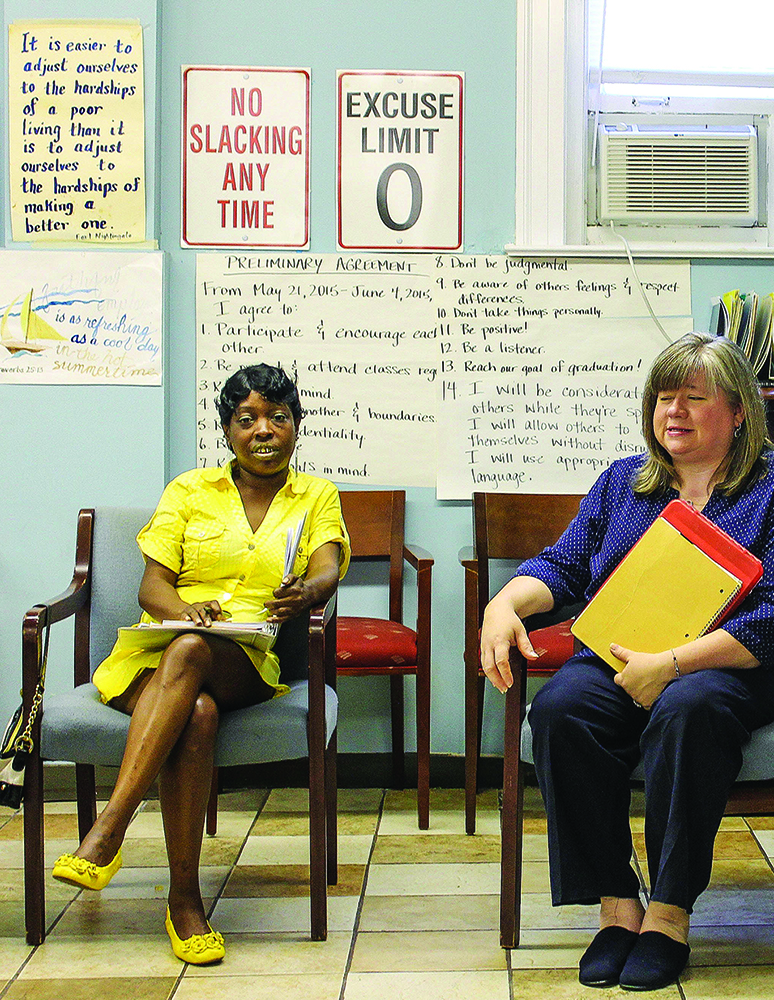 • Bobby Ross Jr. column: Out of prison, into hope

BATON ROUGE, La. — Over four decades, the inmates of…