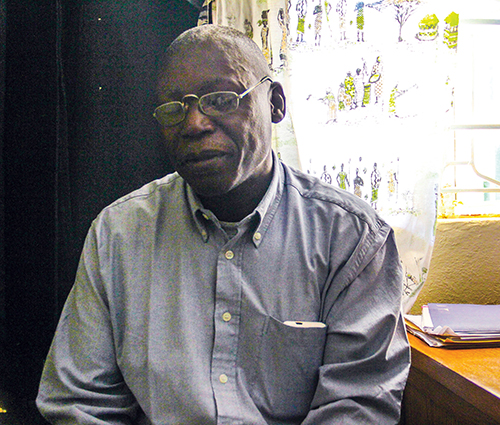 After surviving his father’s attempt to kill him, Dennis Okoth became a powerful witness for Christ in Africa.


Dennis Okoth remembers the gasps and whispers of disbelief, the voices of his home village. Because of his faith in Christ, his father had ordered him bound, poisoned and left for dead. Now he had returned — alive and proclaiming “Jesus is Lord.”

Thirty-five years later, he continues to make that proclamation as he serves 300-plus churches throughout East Africa. As part of the Mbale Mission Team, he trains Christians to be church planters and leaders — free of foreign support — through Messiah Theological Institute.

• ‘Faithful, even to the point of death’  A Christian killed by her husband highlights the danger of following Jesus in India


The institute shares its campus in this eastern Ugandan city with LivingStone International University, a new, faith-based school that seeks to empower future generations of believers with degrees in fields including computer science, communications and Christian ministry. Okoth serves on the university’s board of trustees.

On a rare “office day,” when he’s not traversing dirt roads to reach rural churches, he pushed aside stacks of file folders to make space for visitors from the U.S.

Excitedly, he told them about the ministry’s projects, including a microloan program for women in the villages. Some of them suffer from HIV.
He teaches them to make a living for themselves by “squeezing” — using “the little you have to make a difference.”
And he helps them study the Bible.
“Even if they die, we want them to die under grace,” he said, “knowing that God loves them.”
At 57, he has no plans to retire. He joked that he wants to live to 110 to continue the work.
“As a Christian, as an evangelist, your testimony is always there,” he said, “and your testimony will always speak about the love of God and how he wants his children home.”

POISONED AND PREACHING
Okoth’s testimony began in June 1979, when he was 22. Unlike the rest of his family, he took an interest in the Bible and started talking about Jesus with the people of his village, Odendo, in western Kenya.
His father was a clan leader who presided over rituals “that soothed the ancestral spirits,” Okoth said.“I was a daily threat to his traditional authority and prestige.”
Through the night, my body kept twitching. My tongue was (swollen) full to my palette. After three to four days, I regained consciousness. The first thing that came through my mouth was “Jesus saves.'”
Dennis Okoth

Unable to silence his son, the elder Okoth hired six men to bind him with the chain of an ox plough and a padlock. A day later, a witchdoctor (or “a quack,” as Dennis Okoth described him) arrived and told the young man he had come to “put me to sleep.”

Using a long, veterinary needle intended for cattle, the poisoner injected a white substance into his left arm. Dennis Okoth slipped into unconsciousness.
His captors removed the chains, but refused to bury him.
“Through the night, my body kept twitching,” he said. “My tongue was (swollen) full to my palette.” The agony endured, but “after three to four days, I regained consciousness,” he said. “The first thing that came through my mouth was ‘Jesus saves.’”

When he was able to stand, he sneaked away from the village. Living in exile from his family, he enrolled in the World Bible School correspondence ministry. That ministry connected him to two missionaries — Hilton Merritt and Larry Stephens — in Kisumu, Kenya. They studied with him and baptized him. 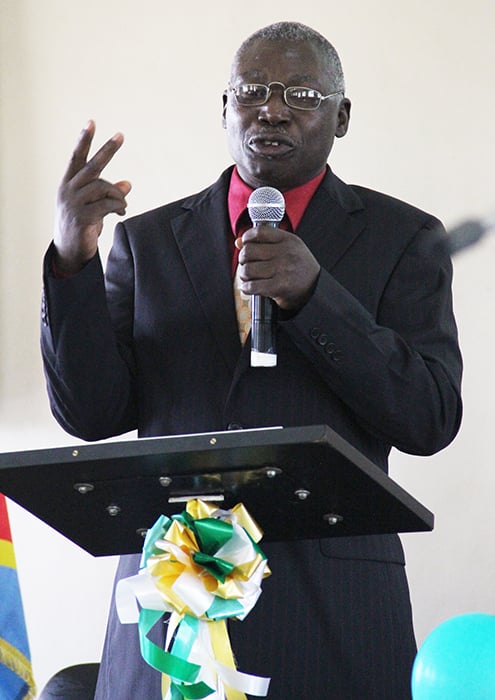 Dennis Okoth speaks to the incoming class at LivingStone International University. (PHOTO BY ERIK TRYGGESTAD)
“To me, Dennis was one of the best contacts that ever surfaced,” said Stephens, now minister for the Livonia Church of Christ in Michigan.
“He didn’t share it with us early on,” Stephens said of Dennis Okoth’s persecution story. “I don’t know why. That came later … maybe a year or two. When I heard that story, it kind of blew me away.”
After he found the courage to share his story with the missionaries, the young minister also found the courage to return to his village — to preach.
“I was a living dead,” he said. “Everyone who saw me was afraid of me, but listened to me talk about the saving power of Jesus Christ anyway.”
Many became Christians, but not his father. Dennis Okoth and his fellow believers were persistent, however, and, after eight years, his father, mother and several family members were baptized.
One of his brothers, Richard, wrote a testimonial about Dennis Okoth’s role in his conversion. The minister keeps it on his computer.
“Your life has given us the strong will to persist in this walk of faith,” Richard Okoth wrote. “Indeed, if you never stood your ground, probably we wouldn’t be seeing the light we enjoy in our family today. …
“I have a model in you — who has taken a stand to rescue a community sinking in sin.”
Looking back, Dennis Okoth bears no ill will to those who bound and poisoned him. His persecution “was a power show — or a contest — between good and evil,” he said.
Dennis Okoth’s father stayed faithful to the church until his death in 2005. He once asked his son to forgive him for his actions on that terrible day in 1979.
His son’s response: “I already forgave you, on that day.”

CHURCH PLANTING AND DEPENDENCY
In the years since his baptism, Dennis Okoth has earned ministry degrees in Africa and the U.S.
He helped missionaries plant the Koma Rock Church of Christ in Kenya’s capital, Nairobi. He and his wife, Mary, have three grown children. His son-in-law preaches for the Koma Rock church. 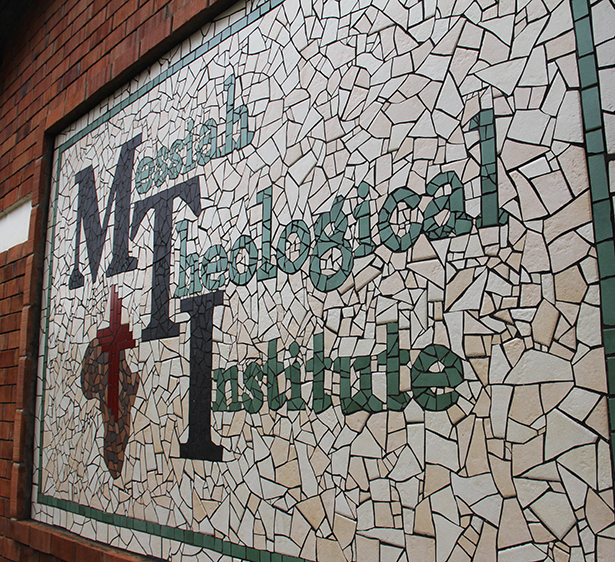 Dennis Okoth trains ministers at Messiah Theological Institute, which shares its campus with LivingStone International University . (PHOTO BY ERIK TRYGGESTAD)
He assists 59 orphans with food, clothing and school fees through his work with Amarillo, Texas-based Christian Relief Fund.
As part of the Mbale Mission Team, he travels to villages similar to his own and helps train Christians to plant churches in their own communities.
“We, as missionaries, do not feel that it is our duty to plant churches,” he said. “We want to train Ugandans to plant churches in their own cultures.”
He’s seen too many Christians in Africa become entangled in foreign support, sometimes leading to their ruination, he said.
“We are trying to take our churches away from dependency,” he added. “All the churches we’re working with don’t have direct U.S. support.”
Fostering a “disciple-making movement” and breaking cycles of dependency can be difficult, he said.
But, as he’s learned from his own father’s confession of faith, “it’s never too late to do things right.”