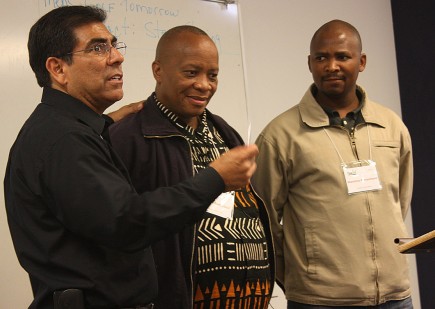 VOICES: A mingling of the mission-minded

Erik Tryggestad
NORTH RICHLAND HILLS, Texas — Effective ministry in the Global South was a recurring topic at this year’s Global Missions Conference.
Missionaries, university students and ministers from around the globe mingled in the hallways of the Legacy Church of Christ, sharing strategies for advancing the Kingdom in a way that promotes indigenous leadership.
Self-sustainable ministry also was a popular topic, in view of the sluggish global economy.
Following are a few faces — and ideas — from the four-day conference:
• Dusty and Cecily Breeding fell in love with mission work in Kenya — and with each other.
They married in July in the East African nation while working with Made in the Streets, an inner-city ministry that helps children escape the cycle of poverty and crime. The couple taught a class titled “Urban Ministry in At-Risk Communities in the Global South.”
Dusty Breeding, a graduate of Pepperdine University in Malibu, Calif., was inspired to go to Africa after attending the World Mission Workshop in 2005. He now serves as youth minister for the University Church of Christ in Malibu.
He and his wife, also a Pepperdine alum, presented a video they produced about Mary, a young woman who grew up in the slums of Nairobi, addicted to drugs before Made in the Streets changed her life. She now works in an upscale restaurant and credits her success to God. Former “street kids” also serve as administrators of the ministry, director Charles Coulston said.
Coulston encouraged congregations outside the Global South to consider how they can best serve youths in need.
“Every big-city church should have a street ministry,” he said.
• “The greatest preachers have always had two jobs. Even Jesus was a carpenter,” said Franco Verardi.
The minister presented “An Italian Vision for Kingdom Expansion” during the conference. Verardi works with Churches of Christ in the southern Italian cities of Taranto, Mesagne and Torre Santa Susanna.
He is a “tentmaker,” or vocational minister, who paints houses to support his work. During his talk, he referenced the apostle Paul’s tentmaking, as recorded in Acts 18.
Verardi also has done international mission work, assisting at a youth camp in Albania and working with the underprivileged in the southeastern Asian nation of Cambodia.
He stressed, however, that “every heart without Christ is a mission field.”
• South African ministers Tebogo Ramatsui and Machona Monyamane discussed their congregation’s work in Africa and around the world. Both men serve the Seeiso Street Church of Christ in Pretoria, a congregation established in 1948 by Ramatsui’s grandfather.
The ministers talked about their church’s efforts to provide home-based care for people suffering from AIDS. The African church also sponsors mission work in India and Cambodia.
Monyamane discussed the role of Africa’s urban congregations in reaching people from across the continent — and sending them home with the Gospel. He likened the work of urban churches to the Holy Spirit on the Day of Pentecost in Acts 2. About 3,000 people were baptized in the big city of Jerusalem. The converts then planted churches in their hometowns, spread across the ancient world.
“That is the plan God had for a global mission,” Monyamane said.