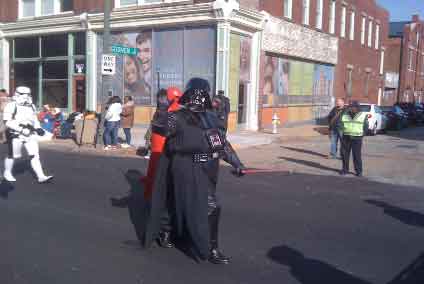 Darth Vader waves as he walks by the West Broad Church of Christ in Richmond, Va., during the annual Dominion Christmas Parade. (Photo via www.wbchurchofchrist.org)

As the annual Dominion Christmas Parade passed by the West Broad Church of Christ in Richmond, Va., the church opened its doors “to provide warmth, restrooms, hot cocoa and cool hospitality to spectators,” church members reported.
“Seventy-nine folks passed through in under two hours,” according to the congregation’s website, “and we were privileged to enjoy pleasant conversations and bright, appreciative smiles.
“A parade, people, goodwill and holiday cheer — is that a winning combination, or what?”

Check out the church’s photo gallery of parade participants. You’ll notice that the parade had an entire Imperial legion from the “Star Wars” movies, including Stormtroopers, Biker Scouts, Boba Fett and Darth Vader himself.
(No word on whether or not the Dark Lord of the Sith came in for hot cocoa.)
The West Broad church’s website details the history of the congregation. The church was established in 1999 as a domestic mission of the Collegeside Church of Christ in Cookeville, Tenn. It is the only Church of Christ in downtown Richmond.
The church started with six attendees — James and Seline Nesmith and their four children. The church has baptized about 100 people and now has an attendance of 124. James Nesmith continues to serve as the congregation’s minister.