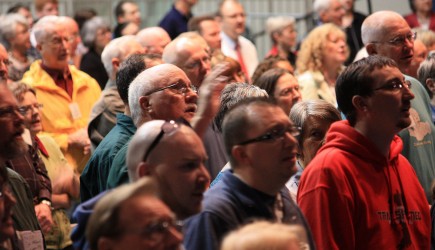 Erik Tryggestad
TULSA, Okla. — When Eric and Chad Walker discuss “21st Century Christians in a Third World Church,” they’re not talking about believers in wealthy nations visiting the rapidly growing churches of the Global South.
They’re talking about video games.
The Walkers, twin brothers who attend the Duncanville Church of Christ in Texas, have worked for the past 13 years in the video game business. And they’re disturbed by what they see, they told attendees at the Tulsa Workshop.
Church members from across the nation attended the annual workshop, sponsored by the Memorial Drive Church of Christ in Tulsa.
The Walkers told fellow Christians that many churches use the equivalent of Third World technology to reach young people — compared to the lightning-fast, modern devices with which children grow up.
In the U.S., children spend countless hours in virtual worlds, interacting with peers through online games, the Walkers said. Few of these games hold up Christian ideals, yet the vast majority of Americans who buy these games claim Christianity as their faith.
“The Christian dollar is driving the industry forward,” Eric Walker said. The Christian is a “non-influencing enabler” of businesses that use violence and profanity to drive sales, he added.
The Walkers are trying to change that. They operate Texas-based Four Story Creative, designing Christian-themed video games in hopes of using the technology to spread the Gospel.
Two Christians from the Global South, Ronald Bwana and Abraham Mulongo, also attended the workshop, telling attendees about The Kibo Group. The Uganda-based ministry seeks to tackle poverty and injustice in East Africa using self-sustaining methods.
Bwana directs The Water Source, a well-drilling and clean water project. Mulongo manages The Mvule Project, a reforestation initiative.
The Ugandans have fielded a lot of questions about Joseph Kony, the subject of a YouTube video produced by San Diego-based Invisible Children. The video, viewed more than 86 million times, calls for Kony, a warlord who turned children into soldiers and terrorized northern Uganda, to be captured and forced to face trial for at the International Criminal Court.
Bwana and Mulongo said they — and many other Ugandans — are perplexed by Kony’s sudden celebrity. Instead of focusing on the warlord’s crimes, ministers in the country’s Churches of Christ have asked, “What if Joseph Kony came here and begged for forgiveness? Could you forgive him?” Some Christians immediately say no, Bwana said. Others say that the Bible compels them to forgive, but the warlord should answer for his crimes, Mulongo added.
Among the keynoters at the workshop was Josh Graves, preaching minister for the Otter Creek Church of Christ in Brentwood, Tenn.
The minister had just returned from a mission trip to Central America and didn’t have time to repack proper shoes. So he preached in flip-flops.
He talked about the Parable of the Talents from Matthew 25. He explained that, in today’s economy, the servant who hid his one talent rather than investing it might seem like the wisest of the three.
But, “in the economy of the Gospel, it never pays to play it safe,” Graves said. “Jesus becomes the parable by going to the cross.”
RELATED BLOG POSTS
Video game evangelism and shoeless preaching — gems from the Tulsa Workshop
Get Kony: How should Christians respond to viral video’s call for justice?