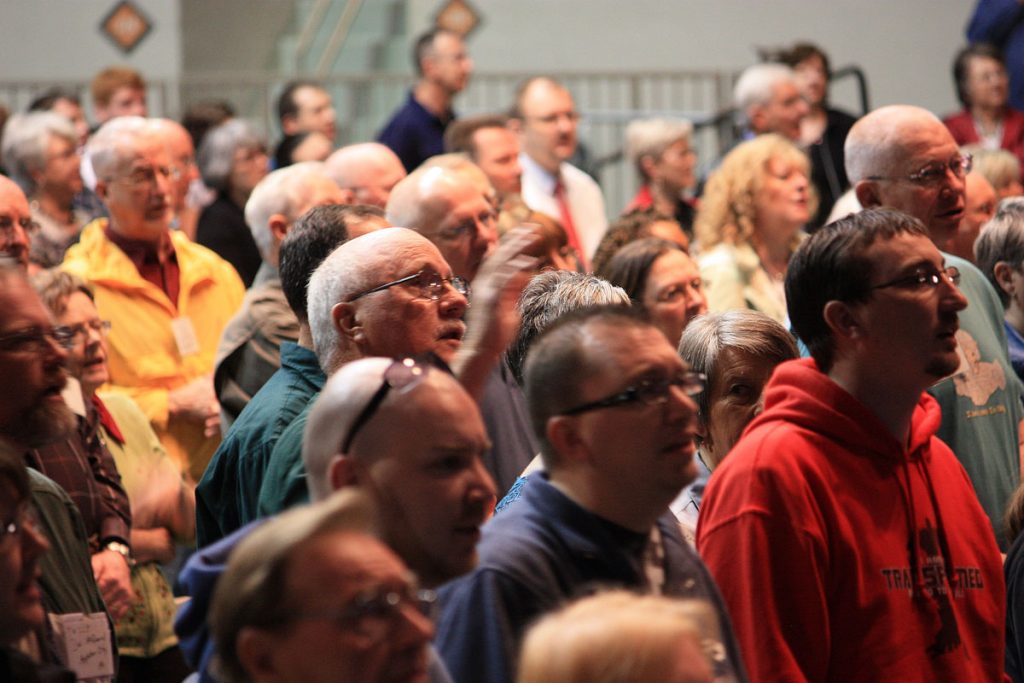 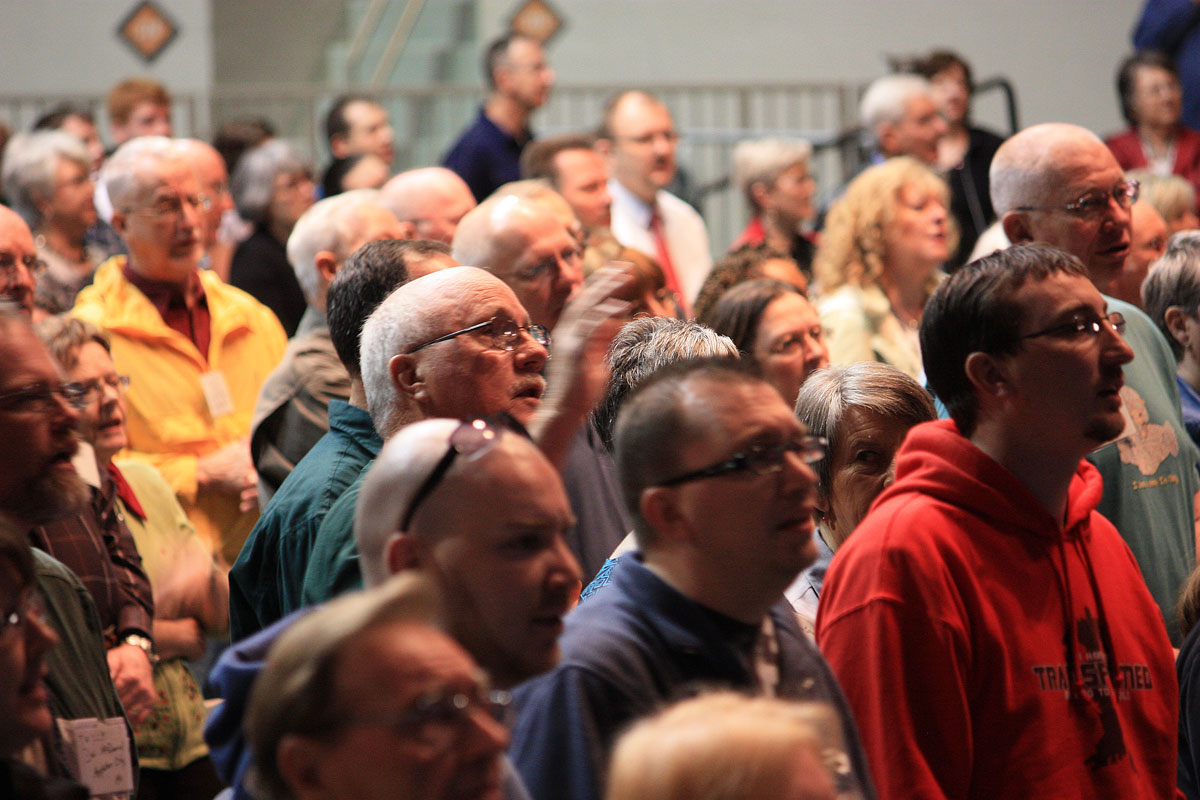 I spent a day perusing booths, shaking hands and hearing the Gospel at the Tulsa Workshop. The annual gathering draws thousands of church members from across the country to northeastern Oklahoma.
The workshop continues through March 24. If you aren’t there already, you still have time to hear speakers including Josh Ross, Don McLaughlin, Trey Morgan and Larry Mudd.
The keynoters aren’t the reason I go to these things, as I discussed in a blog post about last year’s Global Missions Conference. I’m always looking for the “hidden gems” — classes and speakers that don’t get top billing and are sequestered in small conference rooms far from the main stage. 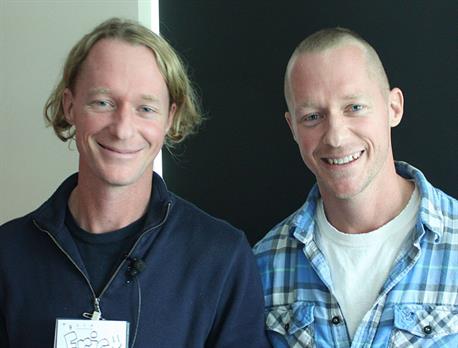 I was intrigued by one class title, “21st Century Christians in a Third World Church,” so I made plans to attend. The Third World (though I don’t like that name … it’s a kind of relic of Cold War thinking) is kind of my “beat” and was the focus of our recent Global South series. When I got to the workshop, however, I noticed that there was a tagline after the title: “Where Video Games and Gospel Meet.”
Video games? Really?
I decided to give it a shot nonetheless. When I arrived in the dimly lit room, the presenters — twin brothers Chad and Eric Walker — were asking the small group of attendees what video game consoles they owned, how many of them spent time online playing games, and what apps they used on their mobile devices. They also wanted to know how many of us had heard of something called Pinterest.
I hadn’t, and I suddenly felt very old. Africa, it seemed, would not be a topic of conversation.
In the next few minutes, the brothers absolutely overwhelmed us with statistical data on the increasing role of technology in our lives. Every day we send 294 billion e-mails, buy 35 million apps, spend 4.7 billion minutes on Facebook. This blog post is one of 2 million that will be produced today.
They also talked about the incredible growth and influence of the video game industry, which has outsold the U.S. movie industry in recent years. Children spend countless hours in virtual worlds, interacting with peers through online games. Very few are Christian-themed or hold up Christian ideals, yet the vast majority of Americans who purchase these games claim Christianity as their faith.
“The Christian dollar is driving the industry forward,” Eric Walker said. “So, where is our money driving the industry?”
The Christian is a “non-influencing enabler” of an industry that trends toward violence and profanity to drive sales, he added.
There are about 54,000 video game developers in the U.S., and very few of them are Christians, the Walkers said. In terms of quality, Christian-themed video games are considered among the worst in the industry.
The Walkers are trying to change that. The brothers, who attend the Duncanville Church of Christ in Texas, have worked for the past 13 years in the video game industry. Their business, Four Story Creative, focuses on film, mobile and online sites, animation, branding and, of course, games. The Walkers are designing Christian-themed video games in hopes of using the technology to spread the Gospel.
I asked Chad Walker how the “Third World Church” factored into all of this. He explained that most congregations, technologically speaking, are living in a developing world culture compared to the way young people in our society communicate. That, he said, could explain why church membership in the U.S. is on the decline, as we reported recently.
Are you a gamer? Do you see the world of online gaming as a way to share your faith — or as a place where you aren’t required to practice your faith? What do Christian parents need to know about the games their kids are playing?
Two other “gems” from my time in Tulsa: 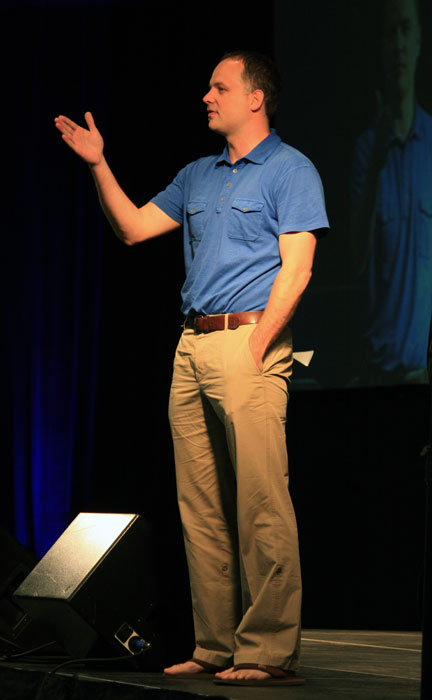 Josh Graves preaches (in flip-flops) at the Tulsa Workshop. (Photo by Erik Tryggestad)

• I had lunch with Trent Wheeler, president of African Christian Schools. In 2008 he organized a whirlwind tour of Nigeria that included the Africans Claiming Africa for Christ conference in the coastal city of Badagry. (The next Africans Claiming Africa Conference is scheduled for August in Zambia. I’m hoping to attend.) Despite the ongoing woes in Nigeria, Churches of Christ continue to prosper, Wheeler said. He told me about several examples of Nigerian Christians taking the initiative — in church-planting and fundraising.
• Josh Graves, preaching minister for the Otter Creek Church of Christ in Brentwood, Tenn., gave a keynote titled “Good News Begins with God.” The minister had just returned from a mission trip to Central America and didn’t have time to repack proper shoes. So he preached in flip-flops. He talked about the Parable of the Talents from Matthew 25. He explained that, in today’s economy, the servant who hid his one talent rather than investing it might seem like the wisest of the three. But, “in the economy of the Gospel, it never pays to play it safe,” Graves said. “Jesus becomes the parable by going to the cross.”