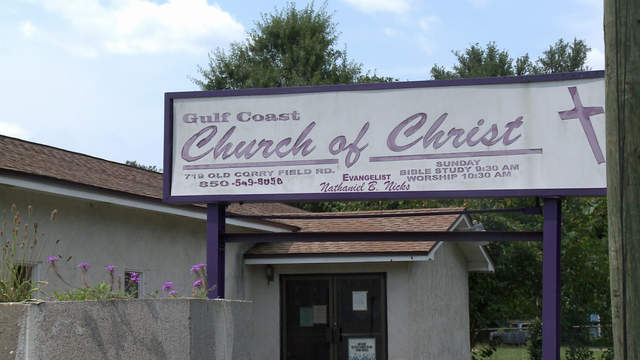 The Gulf Coast Church of Christ’s building in Pensacola, Fla. (Photo via www.fox10tv.com)

Evangelist Nathaniel B. Nicks’ Gulf Coast Church of Christ in Pensacola has been serving the community since 1997.
A vicious storm that brought three days of rain in early June, swamping roads and stranding motorists, also flooded Nicks’ church building on Old Corry Road.
Now it may have to close its doors.
“You know it’s a disaster in a couple of ways, physically as well as emotionally,” said Nicks.
The flood left a waterline nearly a foot high on the outside and inside of the church, leaving behind moldy, water soaked walls.
Items inside, including electronics, children’s toys and thousands of dollars in books were ruined.
“Our services have been interrupted for more than three weeks. Only the foyer and the sanctuary are operational,” Nicks said.