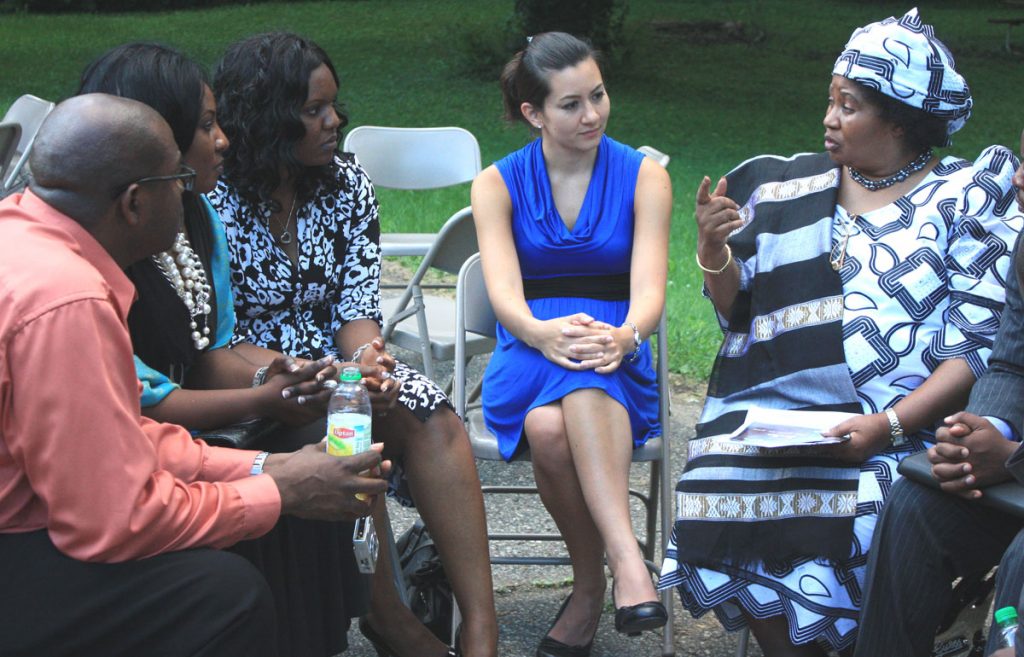 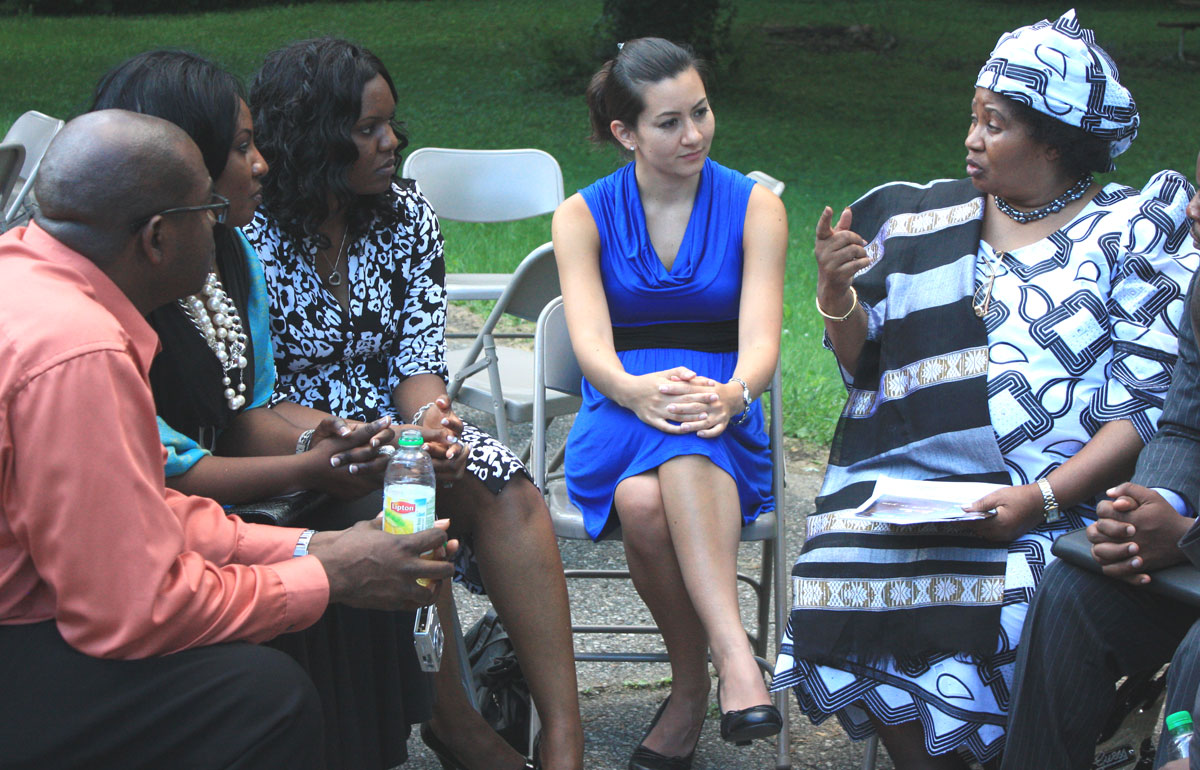 Malawi Vice President Joyce Banda, right, speaks with natives of her homeland living in Indiana at the home of Dick and Suzi Stephens in Indianapolis. After discussing their home country’s educational and developmental needs, Banda prayed with the small group. (Photo by Erik Tryggestad)

A lot of Americans wouldn’t be able to find the nation of Malawi on a map.
That’s not the case with the Green Valley Church of Christ in Noblesville, a suburb of Indianapolis. At least 10 percent of the church’s 300 members has been to the slender, landlocked nation in southern Africa, members told me.
I spent the afternoon here at a reception for Joyce Banda, Malawi’s vice president. She’s a longtime friend of Dick and Suzi Stephens, members of the Green Valley church who oversee The Malawi Project, a nonprofit that helps to feed, heal and educate the people of Malawi. Earlier this year we reported on the ministry’s donation of specialized pieces of farming equipment called Village Tractors (or V-tractors).
During her U.S. trip, the vice president spoke in Washington and New York.
“I made up my mind that I was going to end up in Indianapolis, specifically to say thank you,” she said.
In addition to humanitarian work through The Malawi Project, members of the Green Valley church are partnering with Sunset International Bible Institute in Lubbock, Texas, to establish a new ministry training school there.
Banda thanked The Malawi Project for its emphasis on working with — and seeking input from — local leaders. She also talked about the hard tasks ahead for those developing the school. Then she gave the example of Jesus feeding the 5,000 in the Gospel of John, emphasizing that with God, all things are possible.

Erik, It was nice to meet you and great to have you here. Thanks for your time and fellowship. God bless.
Scott Gordon
Erik, It was so good to be with you last night. I read the Chronicle from cover to cover every time it comes out. It is a blessing to the church. What an honor it was to have the Vice President of the country of Malawi to come just to say “thank you”. She is a wonderful lady. Jim Dillinger
Jim Dillinger
Erik,
It was so nice meeting you and I look forward to seeing more of your work! I think one of the most fascinating things I learned about The Right Honorable Joyce Banda last night is that she is deeply involved with ending abuse against women! It was amazing to meet her and to see all the people who joined Mom and Dick along their journey that has become The Malawi Project. God Bless each and every one of you for perpetuating and taking on as your own this amazing work!!!!
Cheri Griffin
Erik
Enjoyed meeting you last night as we honored The Right Honorable Joyce Banda. Thanks for getting the word out about Kingdom events like this! Keep up the great work.
Van Gilbert
Erik,
It was good to have you, Jerry and Ann, Chris and so many people from several states who came to greet the Vice President of Malawi. Her visit highlights the work the church has been doing in her country. It is seldom that such a high government official extends this kind of recognition to a congregation for its commitment and involvement in another nation. It points out the fact that God uses His people to accomplish impossible things, if we will only step out in faith and go all the way.
Dick Stephens
What a wonderful tribute to Dick and Suzi Stephens for the Vice President of a country to come to their home to just say thank you for all they have done through the Malawi Project for the people of Malawi. Even more than that the people of Malawi see their love. What a blessing they have been to that nation. Jim Dillinger
Jim Dillinger