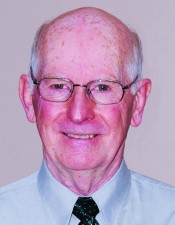 Staff Reports
WATERLOO, Ontario — Art Ford, a longtime Canadian minister and educator, has been named president of Great Lakes Bible College, a small preacher training school about 70 miles west of Toronto.
Ford, 66, had served as minister for the Fennell Avenue Church of Christ in Hamilton, Ontario, since 2007.
“We look forward to the Bible college increasing its ability to serve the brotherhood with Art’s leadership as president,” said Max Craddock, chairman of the Bible college’s board.
“With the blessing of God, the school can grow and serve the Lord’s church in Canada for many years to come,” added Craddock, who preaches for the Strathmore Boulevard Church of Christ in Toronto.
The presidency is a part-time position. Great Lakes Bible College has two full-time staff members: dean and teacher David Knutson and teacher Jim Holston.
Ford, an alumnus of Harding University in Searcy, Ark., taught at Great Lakes Christian High School in Beamsville, Ontario, from 1970 to 1976.
He and his wife, Ruby, then served on the mission field in Papua New Guinea from 1977 to 1987.
When the Fords returned, he served in administrative roles with the high school until 1996, when he assumed the presidency of the high school and Bible college. He retired as president in 2006 — but not permanently, as it turns out.
Don Rose is the high school’s chief administrator.
FOR MORE INFORMATION, see www.glbc.ca.