Editor’s note: Hamil Harris, a Church of Christ minister and veteran journalist who serves as a Christian Chronicle correspondent, wrote this report for the online magazine Religion Unplugged. He also discussed his first-hand experience at the Capitol in a Chronicle panel discussion that was held live on Facebook.

WASHINGTON — At 3:45 a.m., more than 12 hours after an insurrectionist mob stormed the U.S. Capitol, Congress certified the Electoral College results and affirmed that Joe Biden will become the 46th president of the United States on Jan. 20.

The United States and the Senate will not be intimidated.

We are back at our posts. We will discharge our duty under the Constitution for our nation.

And we are going to do it tonight. pic.twitter.com/YH0PtXKDzt

On Wednesday, Pence told Congress that he wouldn’t block the certification of the electoral vote, which was the last obstacle to Biden being certified.

“It is my considered judgment that my oath to support and defend the Constitution constrains me from claiming unilateral authority to determine which electoral votes should be counted and which should not,” Pence wrote in a two-page letter.

“Judas” began trending on Twitter Thursday morning as Trump supporters compared Pence to the disciple who betrayed Jesus Christ to Roman authorities to be crucified.

On Wednesday, thousands of pro-Trump protesters gathered outside the Capitol building claiming election fraud. Two men carried a wooden cross on the east side of the Capitol. Others carried flags and banners with Christian symbols and messages such as “Jesus Saves” as well as references to the far-right QAnon movement.

“I wanted to be here because I feel like the Democrats are slapping our Creator in the face: God Almighty,” Diane McMichael said. “The other side has really corrupted our system, and I am here for my grandchildren.” 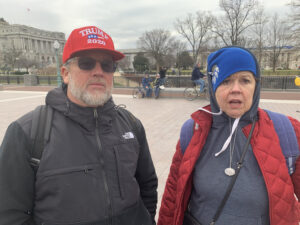 Her husband, Bob, said his day began by listening to Trump “speak the truth.”

“It is very important,” he said of the protest. “It is a basic constitutional right that one has to have under ‘We the people, for the people and by the people.’ We should be able to voice our opinion.”

But while the Senate and the House debated whether to reject electoral votes from Arizona, dozens of pro-Trump demonstrators pushed through police barriers and entered the Capitol. One group of demonstrators carried an ecumenical Christian flag with a sign quoting Ben Franklin: “We have a republic if we can keep it. Let’s make sure we keep it!”

The mob breached the building and forced a lockdown of Congress. Metropolitan Police Department Chief Robert Contee said one woman was fatally shot during a standoff with a mob inside the Capitol.

During a press conference Wednesday night, the chief said three other people suffered “medical emergencies” on the grounds of the U.S. Capitol and subsequently died. As a result, D.C. Mayor Muriel Bowser imposed a 6 p.m. curfew across the District and enlisted the National Guard and law enforcement officials from neighboring states. Bowser had requested National Guard presence before the pro-Trump protest, but the Department of Defense denied it.

Today, I'm ordering a citywide curfew for the District of Columbia from 6:00 p.m. on Wednesday, January 6, until 6:00 a.m. on Thursday, January 7. pic.twitter.com/lp6Pt3DcYC

Wednesday began with President Donald Trump addressing thousands of protesters gathered outside the White House. After his speech about noon, his supporters made their way to the Capitol where people waved various flags and banners — many with Christian symbols — and chanted “USA! USA!”

Around 2:15 p.m., some of the mob pushed through barricades and officers in riot gear to enter the Rotunda and proceeded to the National Statuary Hall and then the House chamber.

As members of Congress sheltered in place, House TV cameras showed the protesters entering the offices of House Speaker Nancy Pelosi and others waving flags, sitting in chairs, posing for photos and carrying a podium.

One man who carried a Confederate flag into the Capitol eventually came outside and yelled, “This is just the beginning.” Another person who entered the building with him came out and told other protesters, ”They shot the lady.”

For hours, Trump supporters stood and shouted outside the East and West fronts of the U.S. Capitol as the vice president and Senate and House members sheltered in place along with staff and journalists.

The protesters, who were overwhelmingly White, carried a range of flags that included the Christian flag, the American flag, the Confederate flag and several state flags including Texas’, the only state that was once its own republic. Many other flags flown were newer creations or represented niche political groups. One white flag with a pine tree and the text “Appeal to Heaven” was used in the Revolutionary War and inspired by an Old Testament battle. 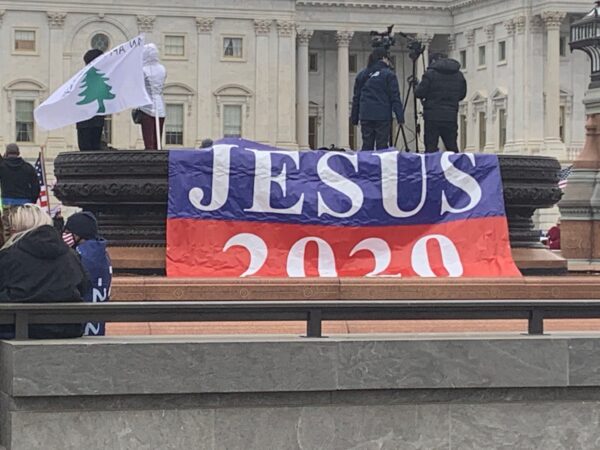 A number of the protesters had attended other Trump rallies. They claimed that the election had been stolen by the Democrats.

“It is not over,” said one man from Manassas, Va. “Any fight we’re having, you should fight until the end. If you are in a battle and you think that you are going to lose, don’t give up, you may not lose. Trump definitely had the election stolen from him, and there is a lot of evidence. It’s too bad the evidence is not getting out.”

The review by Congress was Trump’s last attempt to change the election outcome. Early Thursday morning after the decision to certify Biden, Trump said he would peacefully transition the presidency to Biden on Inauguration Day.

Biden won the electoral and popular votes by wide margins, but the Trump campaign refused to concede for months, losing more than 50 court cases challenging election results in six states and the Supreme Court. Attorney General William Barr said Dec. 1 that FBI agents and U.S. attorneys have investigated claims of fraud and not found evidence of fraud that could have changed the election’s outcome. On Dec. 11, the Supreme Court rejected a suit from Texas that hoped to prevent swing states like Georgia and Pennsylvania from casting their votes for Trump because of believed voter fraud.

Nora, a District resident who only gave her first name, also attended the rally. She came because “our constitutional rights are being taken away.”

“I remember praying in school, and I think that it’s important that our conservative voices be heard,” she said.

Nora, who is White, also said she thought race relations were “pretty good” when protests in Ferguson, Missouri, became violent in 2015 after the police shooting of Michael Brown, an unarmed Black teenager.

“The only way that you can get rid of racism is by turning your heart to God and let him fill you up with love for him and all people,” Nora said. “Racism is not a constitutional issue. It is a heart issue.”

By nightfall, the throng of protesters thinned, and motor coaches escorted by the U.S. Capitol Police rolled between the Capitol and Supreme Court to ferry members of Congress to a safer location.

After a man identified as an Arkansas resident vandalized her office and even sat in a chair and put his feet on her desk, Pelosi gaveled Congress back in session Wednesday night. In a tweet Wednesday evening, she was defiant.

Today’s shameful assault on our democracy — anointed at the highest level of government — must not deter us from our responsibility to the Constitution. Tonight, we will move forward with the certification of President-elect Joe Biden’s election.

“Today’s shameful assault on our democracy — anointed at the highest level of government — must not deter us from our responsibility to the Constitution,” Pelosi said. “Tonight, we will move forward with the certification of President-elect Joe Biden’s election.”

You can find the original version of this story on Religion Unplugged’s website at religionunplugged.com.