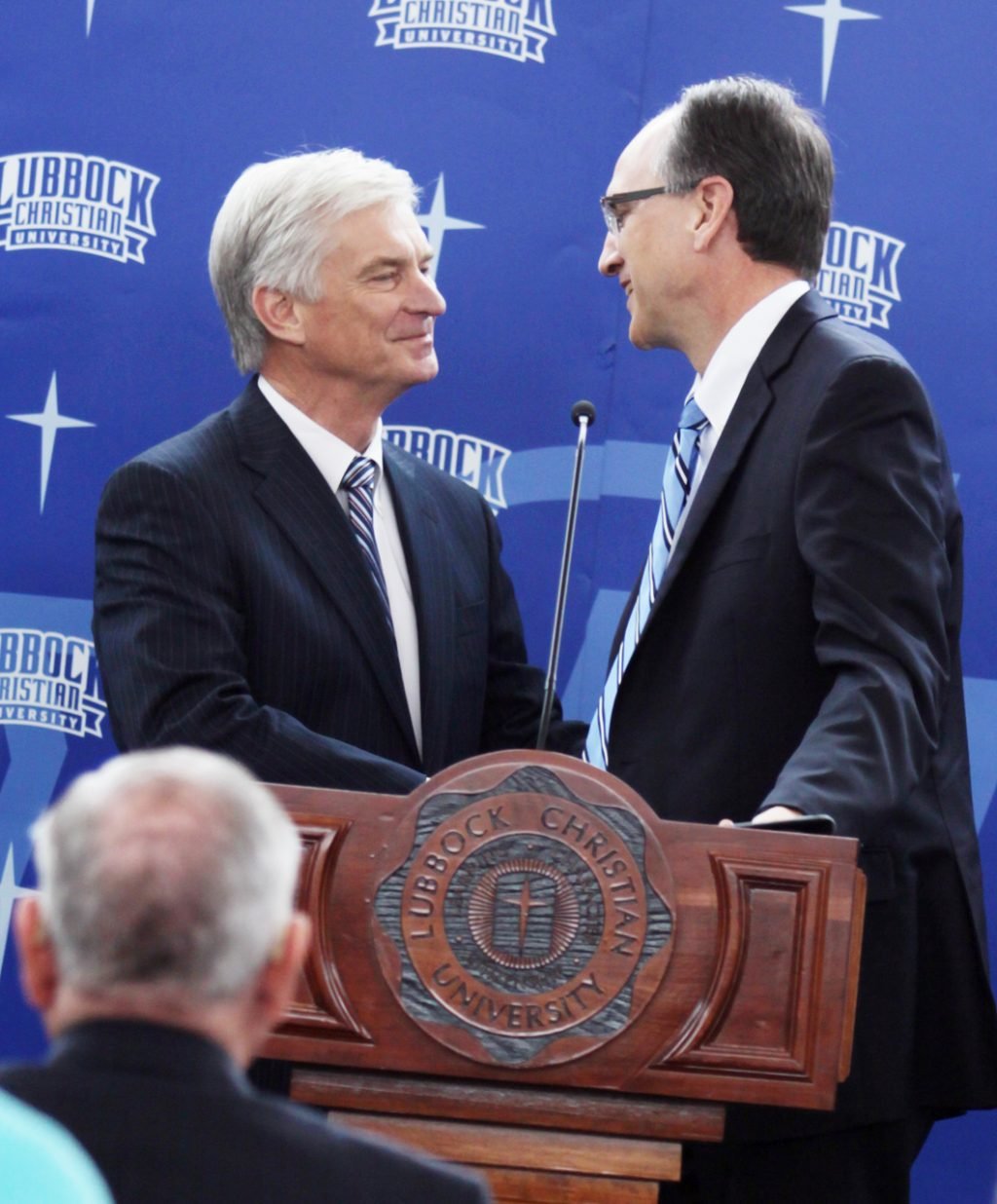 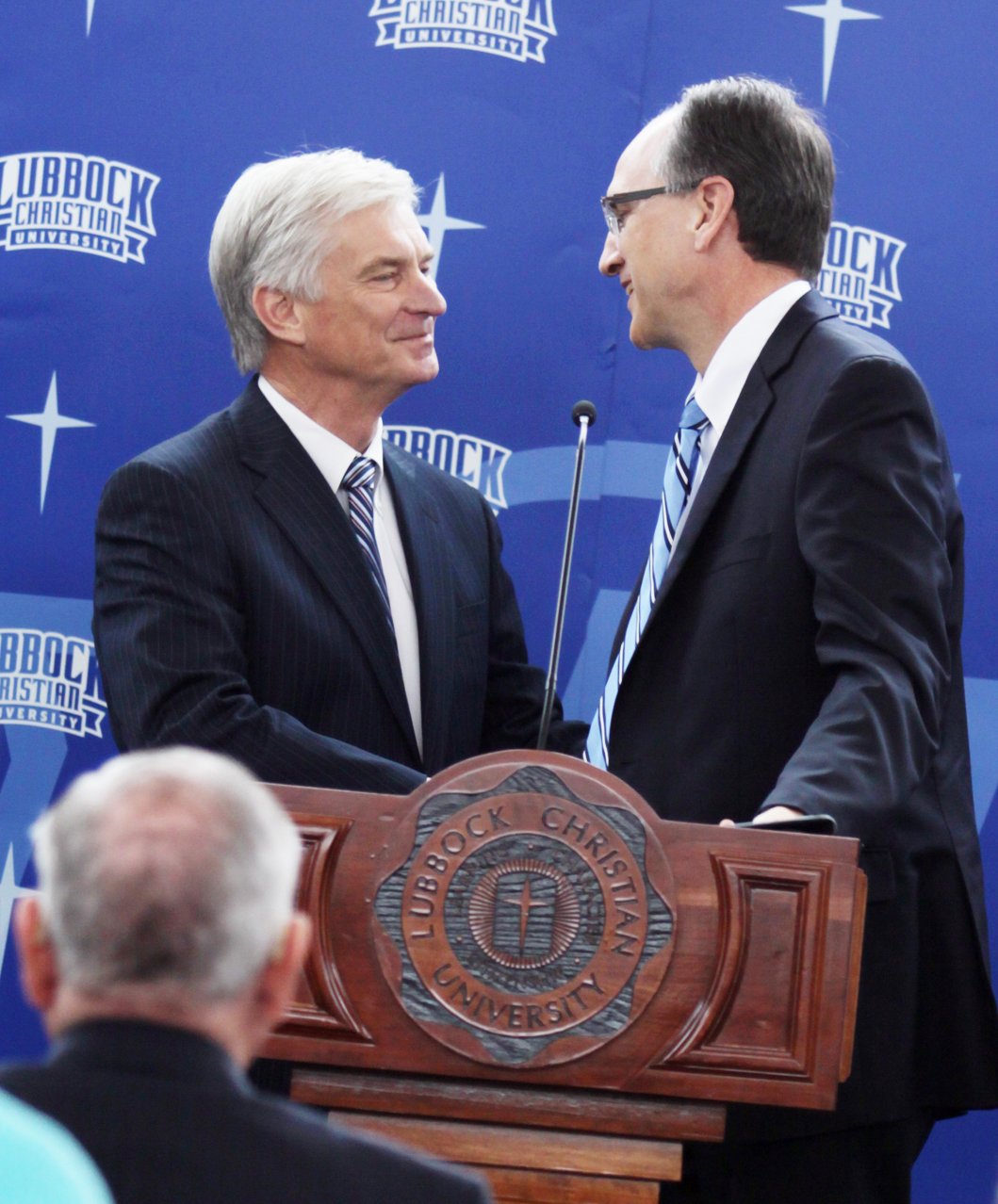 L. Timothy Perrin, a 1984 graduate of Lubbock Christian University in Texas, has been tapped to serve as his alma mater’s sixth president.
Perrin, vice dean and professor of law at Pepperdine University School of Law in Malibu, Calif., will succeed Ken Jones, the Lubbock Christian president for 18 years before transitioning to the role of chancellor last year.
On behalf of the university’s board of trustees, Jones announced Perrin’s selection this morning in a news conference carried live online at LCU.edu/live.
Jones said Perrin and his wife, Lucy, a 1986 LCU alumnus, “both believe that, by the providence of the Almighty God, they’ve been brought right here for this time.”
Perrin took a moment after his introduction to — as he described it — “soak it up.”
“I can’t describe the sense of privilege and the sense of honor I feel in being given this great trust, sacred trust, to take on this role,” he said.
He characterized himself as a “passionate advocate” for Christian higher education. “I want to be a part of a place that pursues not just knowledge but wisdom,” he said.
Brian Starr, executive vice president and professor of economics and investments at Lubbock Christian, was the other finalist invited to meet with the presidential search committee. Perrin served as Pepperdine Law vice dean under former Dean Kenneth Starr, Brian Starr’s uncle and the president of Baylor University in Waco, Texas.
Lubbock Christian, which is associated with Churches of Christ, reported the second-highest enrollment in its history with 2,038 students last fall.
In 2009, the West Texas university drew a majority of freshmen from outside Churches of Christ for the first time — mirroring a trend seen at a growing number of Christian universities within the fellowship.
“The majority of our students come from the area in and around Lubbock,” Brian Starr said in 2009. “The Church of Christ population is declining in many West Texas towns, and that decline changes our recruiting pool.”
Perrin’s full bio, via LCU:

Dean Perrin graduated from LCU in 1984 with a degree in history. He received his J.D. from the Texas Tech School of Law in 1987. Upon graduation from law school, he worked as an associate with the law firm Gary, Thomasson, Hall, & Marks, in Corpus Christi, practicing general civil litigation from 1987 to 1992. Dean Perrin began teaching at Pepperdine University in 1992. He served as associate provost from 2003 to 2007, at which time he was named vice dean of the law school. Tim is married to Lucy, also an LCU alumna, and they have three children: Hannah, Sam, and Will.

Like Lubbock Christian, Oklahoma Christian University in Oklahoma City is expected to name its news president this week.
Oklahoma Christian’s two finalists — John deSteiguer and Allison Garrett — were revealed late last year. The 2,200-student university’s board of trustees is expected to make its selection Saturday.
Mike O’Neal, Oklahoma Christian’s president since 2002, announced plans in 2010 to step down at the end of the 2011-2012 academic year.
Meanwhile, Harding University in Searcy, Ark., has launched a website to accept applications and recommendations for its next president.
Harding President David Burks plans to retire at the end of the 2012-13 academic year after 26 years at the helm.