About 100 people gathered at the North Peoria Church of Christ in Tulsa, Okla., for an Easter prayer service for shooting victims. (Photo via www.news9.com)

(Update: The Tulsa World has posted additional news about the April 6 shootings, including an expanded version of the memorial service coverage.)
The North Peoria Church of Christ in Tulsa, Okla., hosted a prayer service on Easter Sunday for the victims of a weekend shooting rampage.
Three people died and two were seriously injured during a series of shootings on April 6. Tulsa police arrested two white men in connection with the shootings, the Tulsa World reports. All of the shooting victims were black.
About 100 people gathered at the church building for the service, News 9 reports. Religious leaders called for their city to unite, regardless of race, in the wake of the shootings, the Tulsa World reports.

Kavin Ross, who described himself as a concerned citizen, said during a short memorial service for the victims at North Peoria Church of Christ that Tulsans should face the racial tensions brought to surface by the shootings.
“This should not be a black issue or a white issue,” he said. “It should be a Tulsa issue.”
Warren Blakney, minister of the church and local president of the NAACP, thanked the Tulsa Police Department, FBI and other organizations involved in the arrests.
The community feels safer now, but is mindful of what it lost, he said. People are coming together to support the families of the victims, he said.
“I should say to those that may be listening across the country, we are one America,” he said. 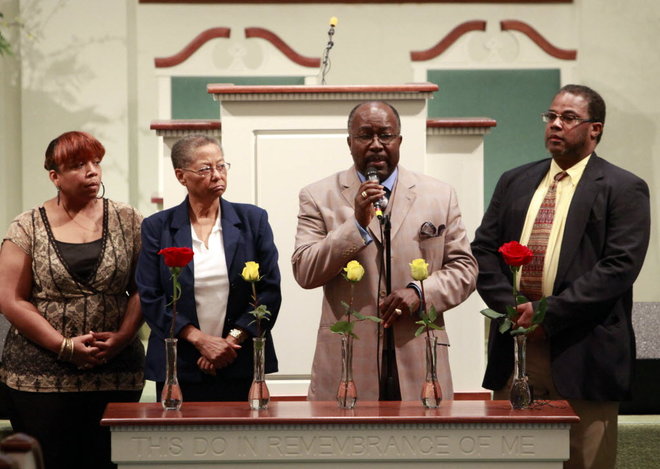