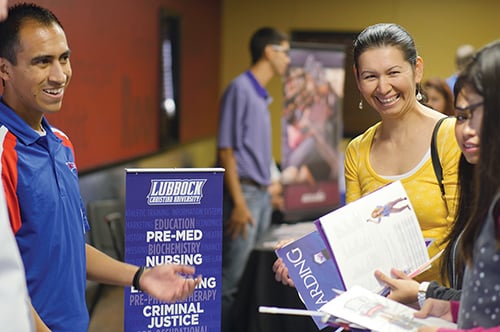 More Latinos than ever are enrolling in colleges across the U.S. Christian universities face financial and cultural hurdles as they recruit Hispanic students, urging them to consider the value of faith-based education.
Amanda Jordan
DALLAS — Christian universities face the same challenge as churches as they strive to reach the fastest-growing ethnic group in the U.S.
Though they claim their doors are open wide for Latinos, few seem to be walking across the threshold.

Related: Growth of Hispanic population in U.S. is an opportunity.
The Latino ministers and church members who comprise Genesis Alliance hope to change that. The ministry, designed to reach first-generation Latinos in the U.S., hosted its first-ever College Day at the Highland Oaks Church of Christ. About 50 people attended.
Recruiters from five universities associated with Churches of Christ spoke to Latino students — and relied on them to translate for the Spanish-speaking parents. One of the translators, Josue Hernandez, said the College Day allowed families “to not only request information but establish a connection.”
Hernandez, a high school senior, said that he’s one of only two students — out of a class of 25 — considering Christian universities. Most of his classmates think private education is too expensive, he said.
Since 1990, the number of people in the U.S. who identify as Hispanic has grown from 22 million to about 53 million — about 17 percent of the population, according to census data.
Churches of Christ across the U.S. seek to reach this rapidly growing demographic. And Christian universities struggle to grow their percentages of Latino students.
A record 69 percent of Hispanic high school graduates in the class of 2012 enrolled in college that fall, two percentage points higher than the rate among their Anglo counterparts, according to a Pew Research Center analysis of census data. Hispanics are, for the first time in U.S. history, the largest minority group on four-year college and university campuses. 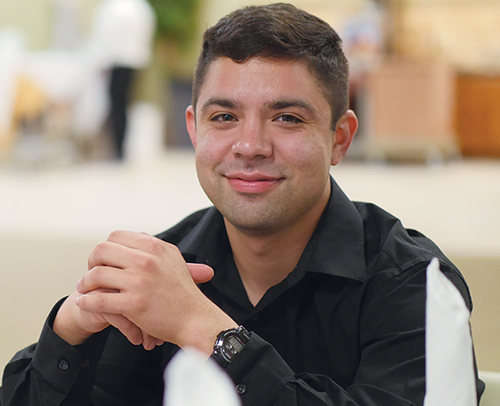 Rivera (PHOTO BY JAMES NORED)
Christian universities need to recognize the demand for higher learning in the Hispanic community, said Wilmer Rivera, a graduate of Oklahoma Christian University in Oklahoma City and coordinator of the college fair. His father, Sixto, is a minister and Genesis Alliance’s executive director.
“It’s like the Bible says, ‘The harvest is ripe, and the workers are few,’” Wilmer Rivera said.
A ‘double hurdle’ for latinos
Most parents, regardless of ethnicity, are concerned about the cost of an education at a private, Christian school. Latino parents are no exception, recruiters at the college fair told The Christian Chronicle.
But Latino students often face a “double hurdle,” said Brian Starr, executive vice president of Lubbock Christian University in Texas. Not only are they an ethnic minority on campus, but they also don’t always identify with students who grew up in English-speaking Churches of Christ.
While many Anglo teens refer to devotionals with their youth groups as “devos,” a Latino college student might ask, “What in the world is a ‘devo,’ besides a bad band from the 1980s?” Starr joked.
Many Latinos who grow up in Spanish-speaking Iglesias de Cristo (Churches of Christ) occupy a middle ground between two cultures — a struggle that can be magnified during college years. Recruiters must be sensitive to their unique needs, Starr said. 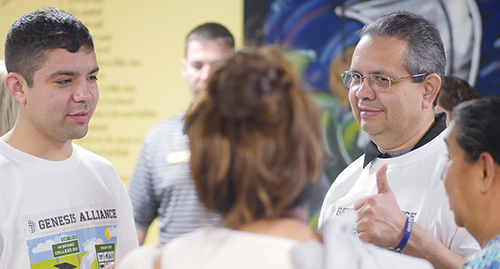 Wilmer and Sixto Rivera talk about the importance of Christian education. (PHOTO BY JAMES NORED)
They also must realize that many Latino students come from tight-knit families that stay close together, said Marshall Wade, Texas representative for Oklahoma Christian. Recruiting Latino students can be intimidating “because you’re having to recruit not just the student, but Mom and Dad, too.”
Christian universities need to highlight their family atmosphere, said Alan Phillips, president of Texas operations for Oklahoma Christian.
That way, families can see the transition from home to a Christian campus as less of a “big shift” and more of a “very natural shift,” he said.
One mother expressed dismay at the distance between Dallas and the universities represented at the fair, Sixto Rivera said. (The closest, Abilene Christian University in Texas and Oklahoma Christian, each are about three hours away.)
But after spending time talking to the recruiters, she was excited to tell her daughter about all she had learned, the minister said.


Crónica Cristiana en español: read selected stories from our ‘One Nación Under God’ series in English and Spanish.

Filed under: National News One Nación Under God Series