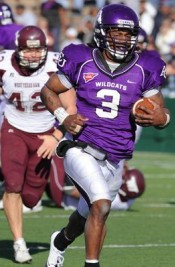 The combined 161 points was an NCAA Division II record.

The Wildcats posted a school-record 810 yards of total offense andscored touchdowns on 13 of 15 possessions on their way to a remarkable93-68 win over the Buffaloes in front of 11,797 fans at ShotwellStadium.  The win sends the second-ranked Wildcats (11-0) into the NCAADivision II quarterfinals for the first time in program history.  ACUwill host Northwest Missouri State at noon Saturday in a rematch of theseason-opener that the Wildcats won, 44-27, in Maryville, Mo.
“I’ve never been a part of anything like that; it was phenomenal,”ACU head coach Chris Thomsen said of his team’s offensive effortagainst the Buffs. “Every one of those guys sold out (today) to make ithappen for us. Everyone told us how hard it was going to be to beat agood team twice in one season, and it was. But our guys never lostfaith or stopped believing in themselves.”
The only time the Wildcats didn’t come away with pointswas on their second possession, when they missed a field goal attempt.