As an American missionary and Ukrainian Christians say tearful goodbyes and cross borders, some stay behind and plead with Russian troops to 'return your sword to its place.'

‘Our temporary shelter is in view. Lord, help us get over the ‘Jordan.’”

Vitaly Samodin posted those words under a picture of two of his family members gazing westward down a long line of cars. The “Jordan” was Ukraine’s border with Slovakia.

Samodin is outreach director for the Ukrainian Education Center in Ukraine’s capital, Kyiv. The campus ministry is supported by Churches of Christ.

After enduring night after night of explosions as Russian forces attacked the city, Samodin made the painful decision to leave. He and his wife loaded their children into their car and slowly headed westward through multiple checkpoints. They camped at the border for more than 48 hours before they were allowed to enter Slovakia.

Samodin’s four children found it difficult to sleep in the cramped car. But “our problems seem superficial,” compared to those faced by Ukrainians enduring daily airstrikes, Samodin said.

“Please pray for this insanity to stop,” he said. “Fear of air raids and missile explosions turn you into a different creature entirely. Every sound is suspicious. Every flash of light makes you wonder if that’s another explosion.”

But during the family’s four-day exodus, they also experienced unparalleled acts of generosity, Samodin said. 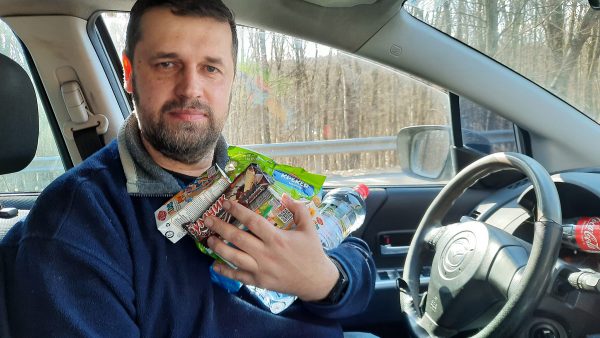 Vitaly Samodin holds an armful of snacks and water he received from volunteers, including church groups, on the Ukraine/Slovakia border.

“Many churches came together to provide meals and other items of necessity to waiting for days to cross the border,” he said. “They set up multiple camps where people can come and get all they need. Also, they drove up to every car several times a day and brought food, water and hot tea. Some provided rides to the border.

“The church is coming together despite denominational differences to help those in dire need. I was thinking about Matthew 25 a lot, the story of sheep and goats. (‘Truly I tell you, whatever you did for one of the least of these brothers and sisters of mine, you did for me.’) People are serving Jesus by serving others.”

‘Betrayal is when you shoot at your friends’

Back in Kyiv, church members including Sasha Prokopchuk are staying put as a column of Russian armor, miles long, approaches the city.

Prokopchuk, who once served in the Soviet army, has preached for Churches of Christ including the Petrovsky congregation in the eastern Ukrainian city of Donetsk, which pro-Russian separatists have controlled since 2014. Prokopchuk operates a television ministry and once conducted gospel meetings at a retreat center on the Black Sea.

In a video recording on March 1, the minister talked about the sounds Ukrainians usually hear as spring approaches — birds chirping. Now, he said, “Our children, our grandchildren hear the explosions of shells, and the sky is on fire.”

Many members of Churches of Christ in Ukraine speak Russian, and Ukrainians across the country of 44 million have close ties to Russian neighbors. Pulling a photograph of his grandchildren from his Bible, Prokopchuk asked, “How can I explain to these children that some uncle decided to send rockets into our sky? … How can I do that?”

“Listen! Before it’s too late, you have a chance. Lay down your weapons. Stop shooting.”

He then appealed to the Russian soldiers making their way toward Kyiv.

“Listen! Before it’s too late, you have a chance,” Prokopchuk said. “Lay down your weapons. Stop shooting.”

Perhaps some soldiers would view such an act as a betrayal of their country, the minister said. “But what is betrayal? Betrayal is when you shoot at your friends, relatives, acquaintances, neighbors, brothers.”

Holding up his Russian-language Bible — one of the thousands distributed throughout the region by Eastern European Mission — he said, “Many of you say Jesus is Lord. Many of you make the sign of the cross in front of the icons and light candles. … Now, here is the Bible that you’ve seen. Maybe some haven’t read it.”

Sasha Prokopchuk pulls a photo of his grandchildren from his Russian-language Bible.

He mentioned Jesus’ betrayal in Matthew 26, when the apostle Peter drew his sword and cut off the ear of the high priest’s servant.

“I quote: ‘Return your sword to its place, for all — for all — who take the sword will perish by the sword.’” Prokopchuk read from Matthew 26:52.

“This is the word of God. This is our spiritual sword,” he said, pointing to his Bible. “The Lord is our strength and shield.”

Mark Posey, who has done mission trips to Ukraine for three decades, was among those who made tearful goodbyes to Ukrainian brothers and sisters. 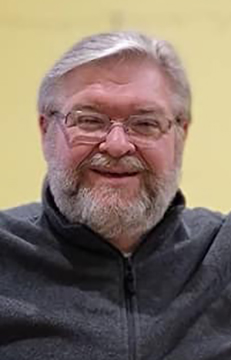 Posey, minister for the Winfield Church of Christ in northwest Alabama, was in Ukraine preaching and teaching at a ministry training school when the attacks began. His original flight home was canceled, so the minister made a long journey by bus westward to Ukraine’s border with Poland.

“After traveling most of the day across the breadth of Ukraine, it did not prepare me for what I saw: thousands and thousands of Ukrainians walking to the border,” Posey said. “Many had abandoned their vehicles — older men and women, mothers and their children — and it was cold.”

Posey had purchased water and enough pirozhki and vareniki (Ukrainian pastries and dumplings) to get him through a multi-day wait at the border. When he saw the people waiting, he exited the bus.

“I gave the water and food to mothers and their children and to the elderly,” Posey said. “As they responded, ‘Spasibo’ (Russian for ‘Thank you’) I was reminded once again: countries and borders must not divide us! We must promote mankind, a vitally important word!”

In Poland’s capital, Warsaw, Posey boarded a plane for the U.S. He contacted The Christian Chronicle from the Miami airport, where he was waiting for a flight to finish his journey home.

“We cannot be consumed by petty differences,” Posey said, reflecting on his exodus from Ukraine. “We must be united on the common ground of faith, hope and love. We must be Christlike! Not only should we sing, but we must live the words of the old song, ‘And they’ll know we are Christians by our love, by our love.’” 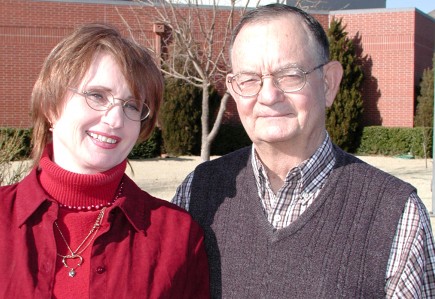 Marina Noyes and her husband, Jim, are a unique couple.…