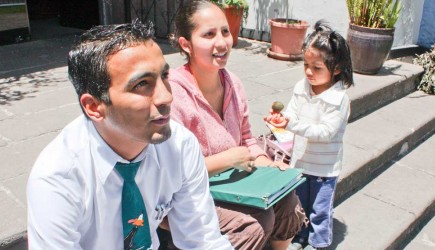 Erik Tryggestad
QUITO, Ecuador — In his short ministry career, Wayler Frances has preached in two hemispheres.
A native of Costa Rica, Frances and his wife, Mariana, are training at the Quito School of Biblical Studies, just a few miles south of the equator.
Before that, the couple spent six months serving the Mission Valley Church of Christ in Tucson, Ariz.
They enjoyed working with the Spanish-speaking congregation, but had difficulty securing a long-term work permit from the U.S. government. So they moved south and enrolled at the Quito school, an affiliate of Sunset International Bible Institute in Lubbock, Texas.
“There is a very high demand for Spanish-speaking preachers in the United States,” said Rudy Wray, a dean of ministry training for Sunset. “There were not enough Spanish-speaking preachers 20 years ago, before the explosion of the Hispanic population, and the need has grown proportionately.”
But church scholars disagree about the use of Latin American ministers to fill U.S. pulpits.
“It is time that we stop drawing preachers from Latin America to come to the U.S.A.,” said Daniel Rodriguez, associate professor of religion and Hispanic studies at Pepperdine University in Malibu, Calif. “They are much more needed, valuable and effective in their native lands than they will ever be in the U.S.”
Rodriguez challenged American ministers and elders to learn some Spanish — and some Hispanic culture — to help bridge the divide between Spanish- and English-speaking church members.
Churches also must strategically target the second- and third-generation Hispanics in this country, who are U.S.-born and bilingual, he said.