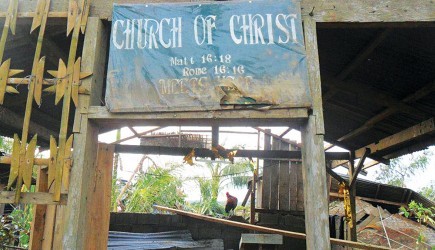 Erik Tryggestad
Pounded by tsunamis, typhoons and floods, the islands of the Philippines rank third on a list of the world’s most disaster-prone countries, behind the South Pacific nations of Tonga and Vanuatu, according to a recent study by environmental groups.
It’s “a distinction we do not cherish,” said Filipino Christian Chito Cusi, “but something that we … have to live with.”
The latest disaster, Typhoon Bopha, swept through the island of Mindanao, which rarely experiences such storms.
The typhoon killed 902 people, with an additional 934 missing, according to the Philippines’ government. The storm left nearly 80,000 homeless.
“You can smell death as you walk the mud-covered streets of Compostela Valley,” Christians who surveyed the damage told Cusi, who coordinates MARCH for Christ.
The ministry, comprised of relief and medical workers from Churches of Christ in the Philippines, sent funds to the communities of Trento and Veruela, where six Churches of Christ and about 200 members were affected by the storm. The ministry also sent funds to a survey team led by Alan Gesulga.
A member of the team, Mercyditha Naparuta, lost both of her parents in a landslide on the island of Leyte about seven years ago, said Salvador Cariaga, a church member who works with Shepherd’s Hill International, another church-supported nonprofit.
Cariaga traveled to Mindanao to assess needs and distribute aid. The island’s poverty and a lack of preparation for the storm “made this calamity even more of a disaster,” he said.
“I would like to focus on giving seeds and teaching livelihood,” Cariaga said. “The soil here is among the best in the world. There is no reason why people have to be poor.”
As church members respond to disasters in the Philippines, those they help come to know Christ, Cusi said.
Recently, at an evangelism workshop in the country’s capital, Manila, Christians who were baptized after natural disasters in the past three years shared their stories.
“One man said he was touched when brethren from the Church of Christ waded through floodwaters to give aid … something his own blood relatives did not do,” Cusi said. “Responding and being there in people’s time of need opens doors.”
FOR MORE INFORMATION, see www.shepherdshill.org. Search for “MARCH for Christ” at facebook.com.