Seeds of hard work and commitment to God were planted long before Bob Ross and Judy Nanney married 50 years ago.

There ain’t nothin’ not affected

When two hearts get connected

All that is, will be or ever was

Every single choice we make

Every breath we get to take

Is all because two people fell in love

This is a love story.

Just three days after she turned 17, the beautiful bride wore a simple white wedding gown that her mother made. She was so nervous that she gashed her leg while shaving that morning.

The groom, barely 19, borrowed a white sports coat from his younger brother. His black tie matched his perfect flattop.

On July 2, 1964 — the same day President Lyndon B. Johnson signed the Civil Rights Act into law — Bob Ross and Judy Nanney exchanged wedding vows in their hometown of Portageville, Mo.

Long before the simple, living-room ceremony 50 years ago, seeds of hard work, Christian faith and commitment to the institution of marriage were planted in both my parents’ hearts. 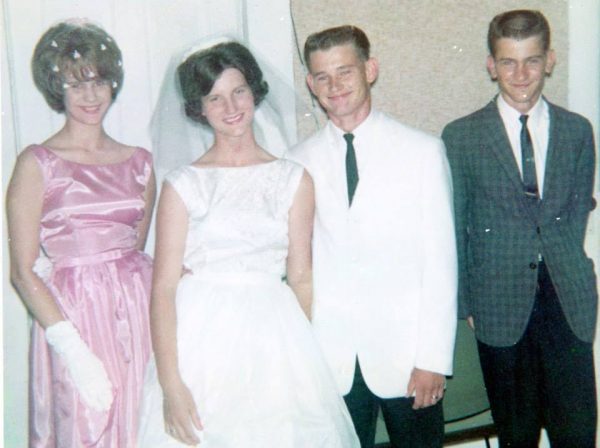 Bob and Judy Ross pose on their wedding day 50 years ago. Sharon Klutts, left, served as the maid of honor, while Kenneth Ross was his older brother Bob’s best man.

My father, the third of four children, grew up in a farming family.

My grandfather Lloyd Ross served in World War II, where he was shot in the face. After the war, Papa worked as a cotton sharecropper and later as a carpenter and commercial fisherman. My grandmother Margaret Ross helped support the family by sewing in a garment factory.

My mother, the middle child of three siblings, grew up in a less stable — but equally loving — family.

My grandfather Earl Nanney, a sweet man who battled mental illness all his adult life, found it difficult to retain a job. My grandmother Edith Nanney dealt with Grandpa’s frequent stints in jail and mental hospitals and her own chronic physical ailments. Through all the trials, Grandma fought to keep her family together. 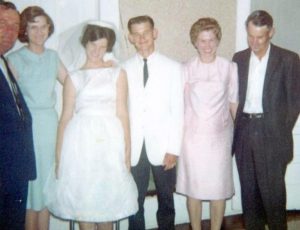 The young couple on their wedding day, with Judy’s parents Earl and Edith Nanney, left, and Bob’s parents Margaret and Lloyd Ross, right.

From early ages, both my parents picked cotton in the fields of southeastern Missouri’s Bootheel.

Dad’s family raised cows and pigs, so the Rosses ate meat more often than the Nanneys. Mom’s family relied on its garden for potatoes, corn and tomatoes.

For the Nanneys, meatloaf or fried chicken on Sunday was considered a real treat.

“My momma did everything she could to feed us, and if people came by selling bushels of peaches or stuff like that, we peeled and cut and chopped everything we could so we wouldn’t starve in the wintertime,” Mom said.

In both households, belief in Jesus was stressed. In fact, my parents first connected at a Bible study for teens.

My mother lived across the street from my father’s friend Danny Coffel. Coffel’s family hosted the study.

“We went over there because we knew there were going to be boys,” said Mom, who was 15 at the time. “We just all started hanging out.” 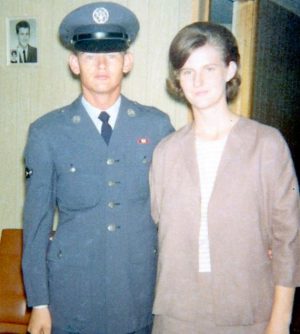 Bob and Judy Ross during their early years of marriage. Bob served in the Air Force and spent a year in Greece away from his wife and children.

The young couple enjoyed roller skating, movies at the drive-in and ice cream cones at a local café.

“I went the longest time before I ever kissed her,” said Dad, then 17. “Then after I kissed her, we decided all that carload of people was too much. We just started going out, me and her.”

“We dumped them people,” Mom said with a chuckle.

Dad grew up in the Church of Christ. Some of my earliest memories of Papa and Grandma are on a light blue church bus. Every Sunday morning, Papa and Grandma would get up early and drive all over the countryside, picking up children, taking them to church and teaching them to sing “Jesus Loves Me.”

Years later, I learned that not everyone had appreciated Papa and Grandma’s bus ministry. You start filling a white church’s pews with black children, especially in the 1970s, and people talk.

Mom grew up in the First Baptist Church. I still can remember Grandpa — on those occasions when he wasn’t hospitalized — rising before dawn on Sunday and playing gospel music at an ungodly volume.

He loved my dad but couldn’t resist calling him a “Campbellite.” I can’t recall a day, meanwhile, that I didn’t see Grandma open up her Bible and spend time reading and reflecting on God’s word. 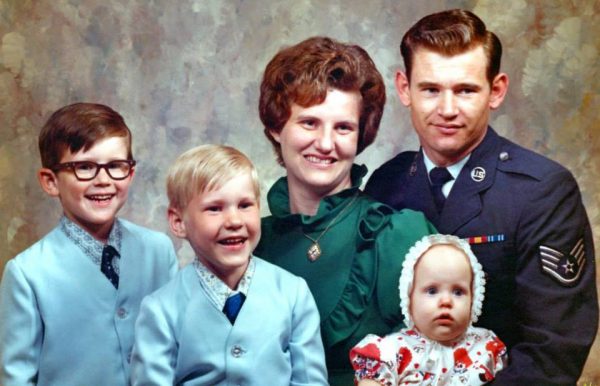 Bob and Judy Ross, with children Bobby, Scott and Christy, in the 1970s.

While they were dating, Mom and Dad visited each other’s church from time to time.

“I went to church just to be with her,” Dad said.

“But he wouldn’t sing,” Mom said with a laugh — a reference to his concern over the organ and piano used in the Baptist church’s worship assembly.

About six months after they married, Mom stepped forward at a Church of Christ assembly and asked to be baptized for the forgiveness of sins. 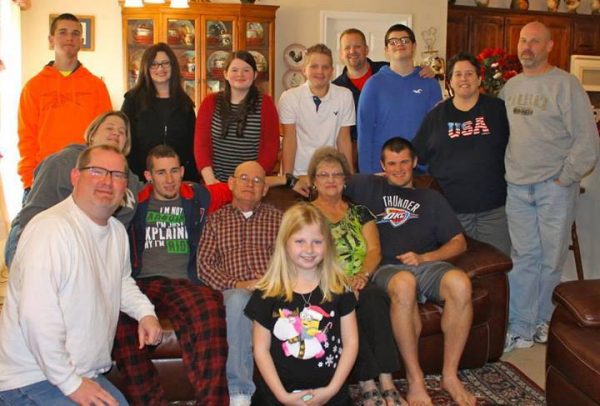 Bob and Judy Ross in a recent photo with their children and grandchildren at their Haslet, Texas, home.

When Mom and Dad said “I do,” they meant it.

My parents were raised to believe that marriage means forever. 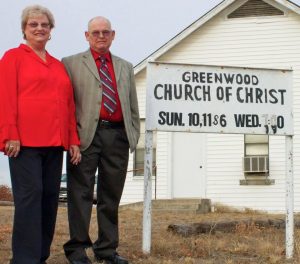 Bob and Judy Ross celebrate 50 years of marriage this week. He preaches for the Greenwood Christ of Christ, north of Fort Worth, Texas.

Early in their marriage, my parents spent a year apart as Dad joined the Air Force and served overseas — in Greece — during the Vietnam War.

Dad later studied at the now-defunct White’s Ferry Road School of Preaching in West Monroe, La., and Freed-Hardeman University in Henderson, Tenn., and became a preacher.

In 1982, my freshman year of high school, Mom and Dad began 25 years of full-time ministry as houseparents at Christ’s Haven for Children in Keller, Texas.

Now mostly retired, they dote on their seven grandchildren — ages 10 to 21 — and remain madly in love. Dad still preaches at a little country church in Greenwood, Texas, about 55 miles north of Fort Worth.

I thank God for giving me Christian parents who shared their legacy of faith with me, my brother Scott, my sister Christy and our entire extended family — not to mention the hundreds of girls for whom they cared at Christ’s Haven.

I am so incredibly blessed that two people fell in love.

BOBBY ROSS JR. is Chief Correspondent of The Christian Chronicle. Reach him at [email protected].

Filed under: Inside Story People

Father-son trip to the Big Apple an adventure