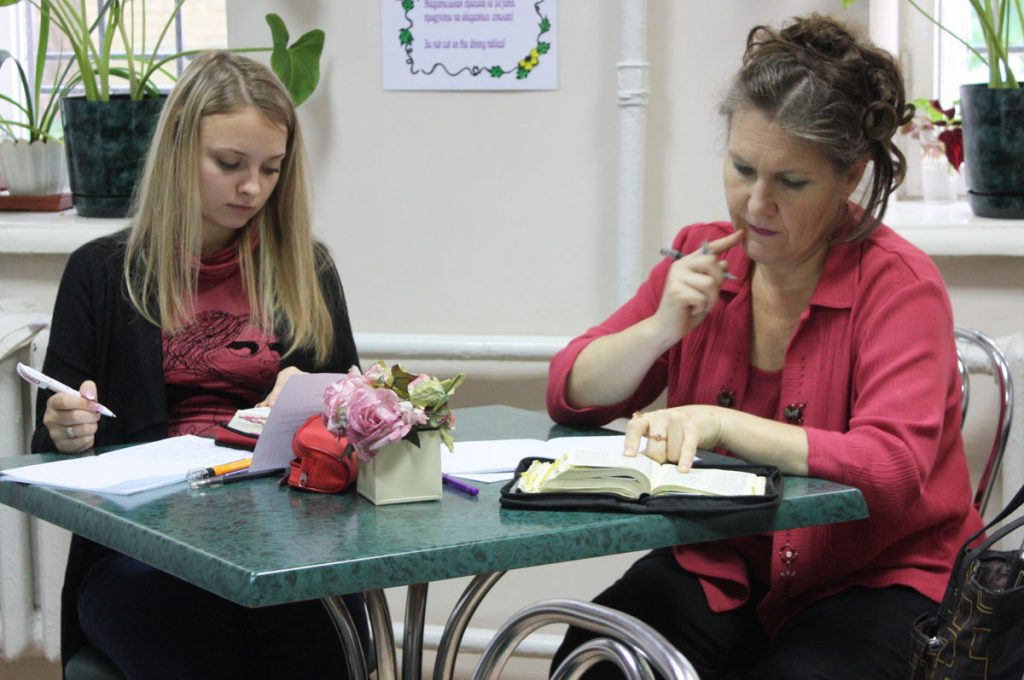 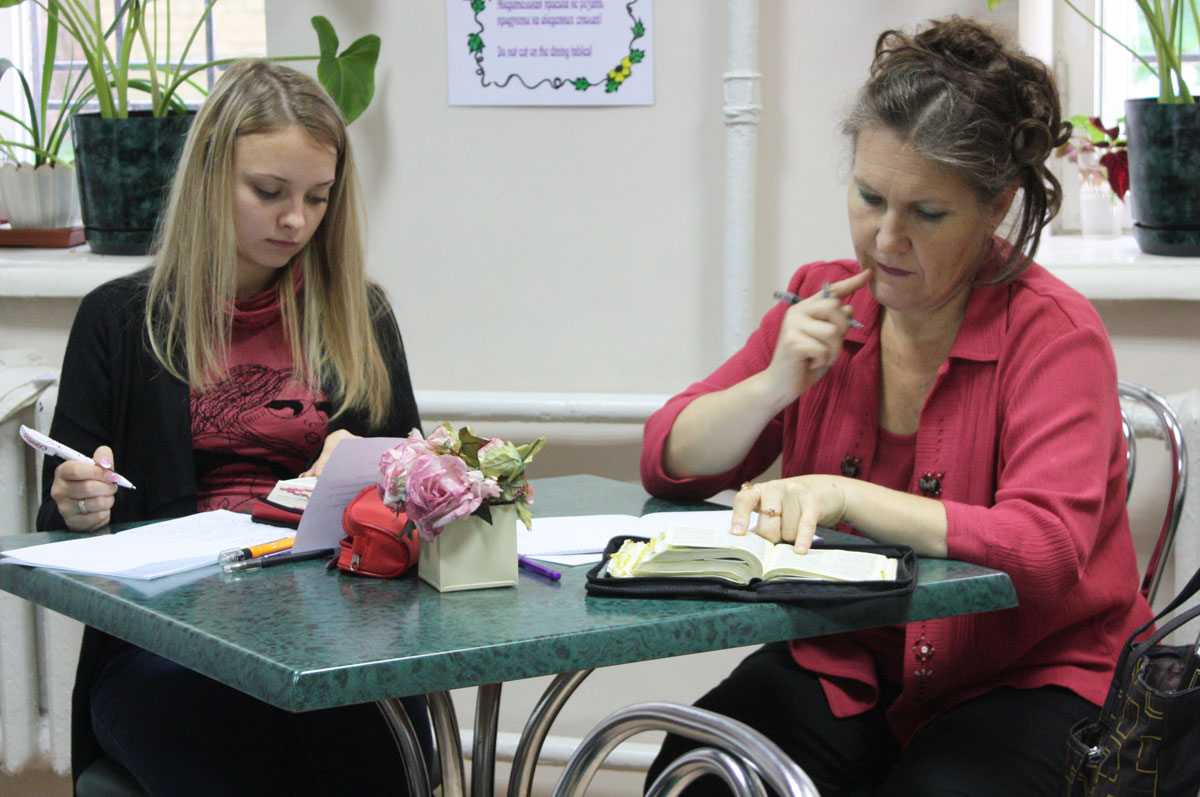 Students look up scriptures in their Bibles during a class at Ukrainian Bible Institute. (Photo by Erik Tryggestad)

Blogging live from Donetsk, Ukraine
On the second leg of my Ukraine reporting trip, I’m in the country’s “Bible Belt.”
The first missionaries from Churches of Christ came here in the mid-1990s. Now, two decades after the fall of the Iron Curtain, we’re seeing the first second-generation preaching students at the Ukrainian Bible Institute, a ministry training facility affiliated with Lubbock, Texas-based Sunset International Bible Institute. 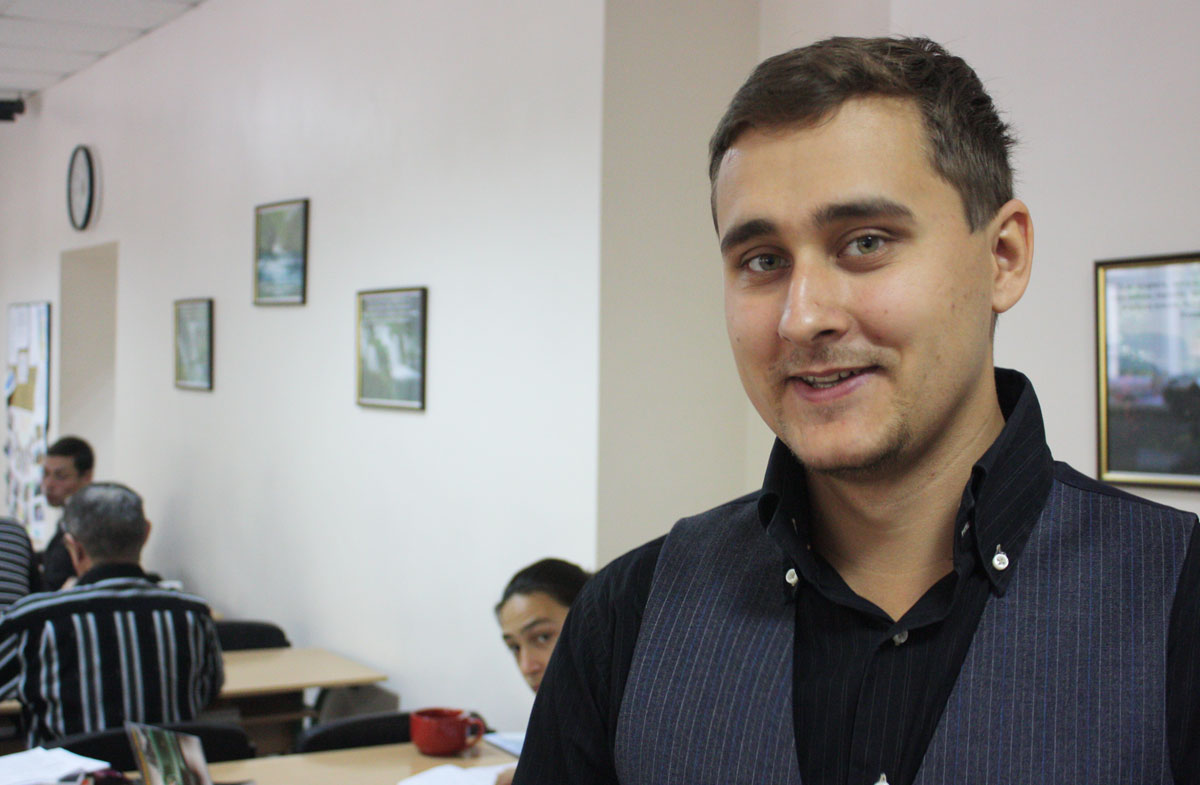 Miroslav Seliverstov is one of them. He grew up in the eastern Ukrainian town of Artemovsk, about 90 kilometers north of Donetsk, and is a bona-fide PK (Preacher’s Kid). His whole family heard the Gospel  in the summer of 1999.
Back then, “foreigners were something to stare at,” he told me. So his mom said, “There are Americans coming. Let’s go look at them.” These Americans were a campaign team from Churches of Christ. Seliverstov’s whole family was baptized on the same day. His dad attended UBI and became a preacher.
Now Seliverstov is following in his father’s footsteps, though it wasn’t something he envisioned doing until a few years ago. Living in Kramatorsk, Ukraine, and working as a computer specialist for a rail station, he was convicted by a U.S. missionary working with the local church to improve his ministry skills.
He doesn’t anticipate going into full-time preaching after he graduates from the two-year program, however.
“My father is a preacher, and I know it’s difficult,” he said, referring to the financial struggles faced by ministers in Ukraine — and the rest of Europe — in hard economic times. Here “ministry cannot be your source of income,” he said.
Regardless of what he does after graduation, “I hope to be useful in some church,” he added.
Helen Tchouenko also traveled here from Kramatorsk to study at UBI. She first encountered Churches of Christ in 2003 when she attended a church-run summer camp in Ukraine. She was 13.
“It was the first time people were speaking about God to me,” she said. “I was impressed by the relationships among Christians.”
She was baptized at another camp two years later. Now she’s attending UBI to improve her ministry skills. After graduation, she hopes to work in children’s ministry and influence future generations of teens with the Gospel. 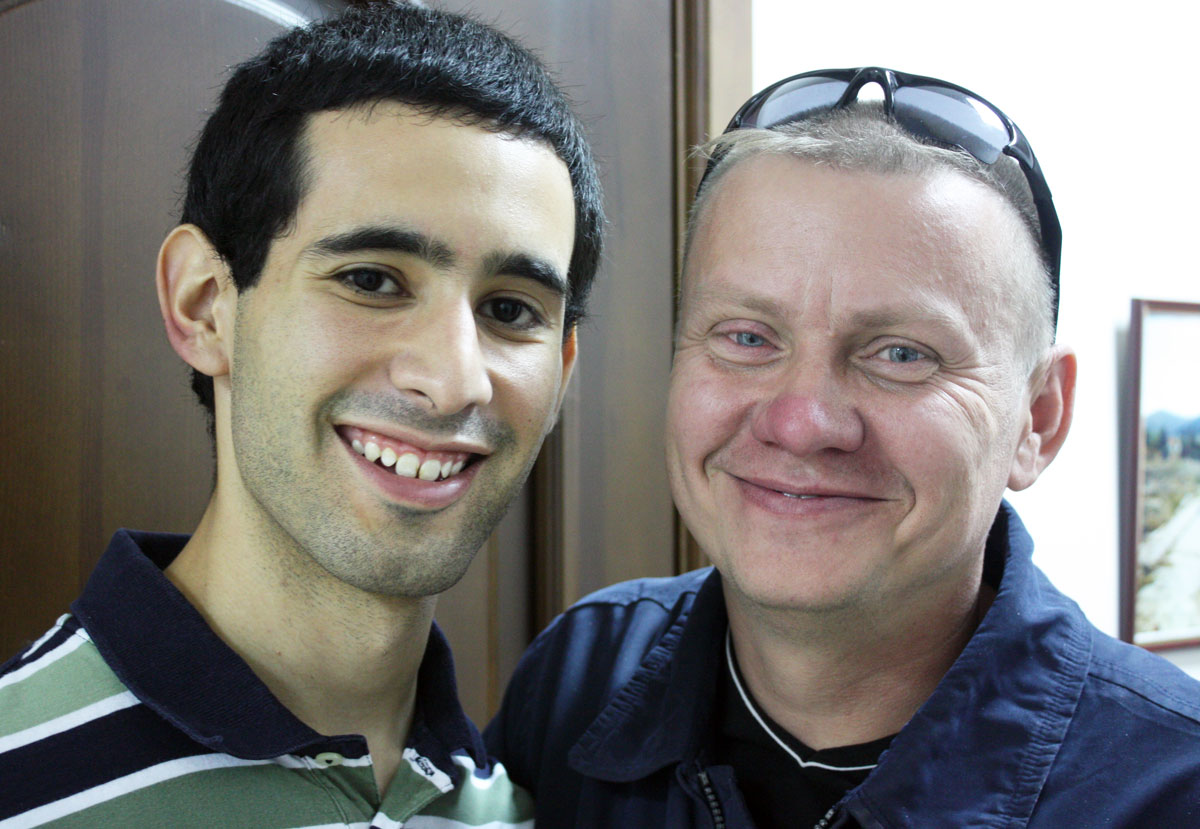 Gabe Fisher is here for three weeks teaching Greek to the students. Fisher is a minister in Woodson, Texas, and a graduate student at Lubbock Christian University. The university has sent its choir to tour in Donetsk and other parts of Ukraine, introducing countless Ukrainians to Churches of Christ. Fisher has traveled here to help in youth camps and said he’s impressed by the friendliness of the people here — and their hunger for Bible knowledge.
“It’s hard not to come back,” he said.