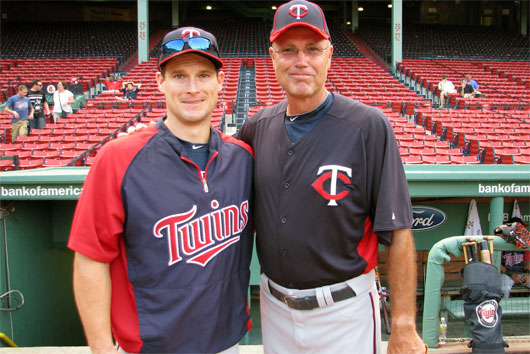 Twins in the faith: coach Liddle, slugger Willingham team up in Minnesota

Minnesota Twins slugger Josh Willingham and third-base coach Steve Liddle have at least one thing in common (besides their matching uniforms): Both are faithful members of Churches of Christ.
I interviewed Liddle at spring training in Fort Myers, Fla., in 2007 and wrote a Christian Chronicle profile about him.
I caught up with Willingham at Nationals Park in Washington, D.C., in 2010 and again at Rangers Ballpark in Arlington, Texas, last year.
After signing a three-year, $21 million contract with the Twins this past offseason, Willingham is enjoying the best season of his career. He has 33 home runs (sixth most in the American League) and 98 runs batted in (third behind only the Rangers’ Josh Hamilton and the Tigers’ Miguel Cabrera). He ranks in the top 10 in a number of major offensive categories.
Liddle, who played on Lipscomb’s 1979 NAIA national championship team, was the focus of a recent LipscombSports.com feature:

BOSTON _ Steve Liddle knows what a privilege it is to be able to walk on the field at Fenway Park, the oldest stadium in Major League baseball, celebrating its 100th year this season.
“Fenway Park is the most beloved baseball park in the United States,” Liddle said as he prepared to throw batting practice. “Just to go out and walk on the same field as Ted Williams and other guys like that who have played here is a great honor.”
Liddle, 53, isn’t certain how much longer he will be involved in professional baseball. His family is based in Smyrna, Tenn., a long way from Minneapolis. He has enjoyed all of the perks of being part of a Major League team and admits that when he does leave the game it will be with a touch of regret.

A photo of Liddle and Willingham (whose mother, Denise, is a Lipscomb alumnus) accompanied the story.
Related column from 2011: Travels bring ballpark fun, fellowship