In the Trump-Biden race, which issue matters more to Christian voters?

For Connor McDaniel, one issue ranks as most important in the 2020 presidential race.

“There are few people of character/integrity in politics,” said McDaniel, a member of the Bremen Church of Christ in Georgia. “The same way we go to (a department store) and buy clothes made with child labor, I believe we must put aside people’s life choices when it comes to doing a job. And Christians have to do theirs, too.”

In the 19-year-old’s view, Christians’ job in the election in which he will cast his first vote for president is to re-elect Donald Trump, the Republican incumbent.

If the U.S. Senate approves Trump’s nominee, the future of Roe v. Wade, the landmark 1973 decision that legalized abortion, could be in doubt.

“No one candidate is ever perfect,” McDaniel said, explaining his support for Trump. “I am simply a Christian. If one party aligns more with Jesus’ teaching, I will vote that way, even though the truth is neither side is totally Christ-like.”

Like McDaniel, Johanna Sue Turner said she is against abortion.

But the 67-year-old member of the East View Church of Christ in Tucson, Ariz., places a higher priority on a candidate’s personal traits.

Turner said she sees “lapses in both candidates” but is “very disappointed in how Trump acts — his tweets, his bombasticy and rudeness.”

“I like what the Republicans stand for — against abortion, for man/woman marriage, etc. — but am not happy with Trump,” said Turner, who voted for him four years ago. “I think the Democrats are very liberal on some things.”

But this November, she plans to cast her ballot for former Vice President Joe Biden, despite the Democratic nominee’s support for abortion rights. 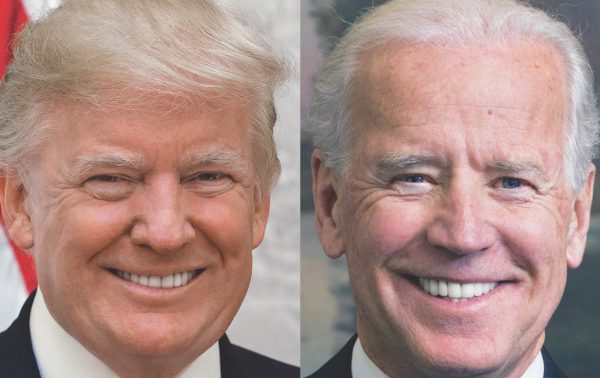 In a recent online survey, The Christian Chronicle asked readers to comment on the candidates and issues in the 2020 White House race.

More than 300 Christians responded, splitting almost evenly between Trump and Biden. Also, several voters plan to vote for a third-party candidate, while others remain undecided.

“Both candidates have their flaws. My candidate, President Trump, is lacking in both character and integrity.”

“Both candidates have their flaws,” McGee added. “My candidate, President Trump, is lacking in both character and integrity.”

However, other Christians see their choice in a more positive light.

Terry Pace, 75, a member of the Otisville Church of Christ in Ohio, said character and integrity are “very important.”

“Trump lacks in some ways, shines in others,” Pace said of his pick. 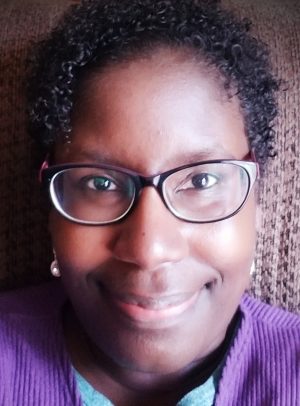 Trindi Mitchell, 42, a member of the Henry Street Church of Christ in Gadsden, Ala., said: “Character and integrity are everything, and yes, Joe Biden is a kind and decent man who understands and empathizes with all Americans, regardless of race and class.”

But Bonnie Herken, 64, a member of the Leavenworth Church of Christ in Kansas, said she can’t bring herself to vote for either major-party candidate.

“I hear many Christians say you have to ignore what he says and look at what he does,” Herken said of Trump. “I can’t do that with my president. … My faith will not allow me to vote for a leader who calls people names and, in my opinion, lies.”

At the same time, she said, “I also do not like things in the Democratic platform, so I will be voting Libertarian.”

For Albert Jay Kelley, 57, minister for the Austin Street Church of Christ in Levelland, Texas, “keeping the Bill of Rights” ranks as the top priority.

“I want a candidate that will leave me at peace to worship God and preach the Gospel.”

“There are no candidates running in which I can see character or integrity,” said Kelley, who intends to vote for Trump. “I want a candidate that will leave me at peace to worship God and preach the Gospel.”

But for Chris Carlisle, 41, a leader of the Oppelo Church of Christ in Arkansas, the No. 1 issue is “the division in our country.”

“Nothing else will matter if we don’t fix the division,” said Carlisle, who supported a third-party candidate four years ago but plans to vote for Biden this time.

“At least compared to the other major candidate, I see tremendous character and integrity” in Biden, the Arkansas church member said. 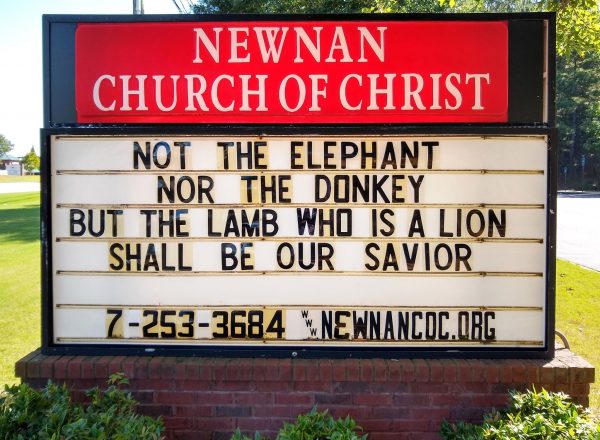 A sign at the Newnan Church of Christ in Georgia.

The role of faith in voting

Emily Crow, 33, a member of the Collinsville Church of Christ in Oklahoma, is concerned about “right to life for the unborn and other constitutional rights.”

“I want a president that is truthful and genuine,” said Crow, who voted for Trump in 2016 and intends to do so again. “My faith determines the importance of issues. The candidate that aligns mostly with how I align on issues is how I determine my vote.”

Related: Why these 21st century David Lipscombs won’t vote for Trump or Biden

On the other hand, Nicole Michael, 26, a member of the Blue Starr Church of Christ in Claremore, Okla., said, “My faith will not allow me to vote for someone who is a bully, name calls and demeans others to feel superior.”

Michael didn’t vote in 2016 but plans to cast a ballot for Biden this time.

She lists social reforms, the environment, healthcare and education as issues important to her and describes Biden as “the best of the options available.”

‘Character and integrity are multidimensional’

But as Isaac Taylor, 30, a member of the Alkire Road Church of Christ in Grove City, Ohio, sees it, “Character and integrity are multidimensional, and they are less important than the candidates’ ability to deliver on the issues I’m concerned about.”

In Taylor’s case, those issues are immigration and Christian values. He didn’t vote four years ago but supports Trump this time.

Jake Doberenz, 23, minister for the Mayfair Church of Christ in Oklahoma City, points to economic justice, racial equality and the character of the president as top issues.

He remains undecided on Trump vs. Biden.

“My faith informs the fact that I care about the character of a leader, not just their policies,” Doberenz said. “My faith also gives me the value of ‘care for the least of these.’ I vote not for my own interests but for the interests of others (Philippians 2:4) — especially those whose voice isn’t heard.”

In the view of Andrew Anderson, that unheard voice belongs to the unborn.

Anderson, 28, a member of the Liberty Church of Christ in Dennis, Miss., characterizes abortion as his No. 1 priority “followed by Supreme Court picks.”

“I don’t believe either candidate has good character or integrity,” Anderson said. “I’m picking the better of the two on the issues.

“In past elections … I would have voted on character and integrity. This time there’s not much of either to go around.”

“In past elections, though, I would have voted on character and integrity,” he added. “This time there’s not much of either to go around.”

But for Roger Chapman, the 2020 election is about more than any single issue.

“Faith plays a role in all matters,” said Chapman, 60, a leader of the Jupiter-Tequesta Church of Christ in Florida. “My faith teaches me that no candidate or political party is perfect.

“I look at the big picture, not just abortion,” the Biden supporter added. “I was an orphan, so I know pro-life is more than about the unborn. Only caring about the unborn is a cop-out.”