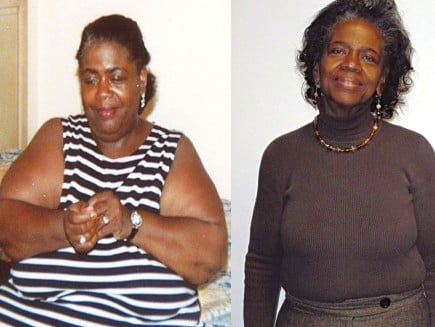 Amid an obesity epidemic, more churches promote physical as well as spiritual fitness.

Bobby Ross Jr.
By outward appearances — her size 62 dress notwithstanding — Carlee Doggan was on fire for the Lord.
She faithfully attended every worship assembly. She taught a Bible class. She served on church committees and traveled to gospel meetings and crusades.
“I brought souls to Christ and even helped souls already in the body stay,” said Doggan, a member of the Monroe Street Church of Christ in Chicago. “Yet I was getting bigger and bigger physically and more estranged from my King.
“I was not following my own advice,” she added. “I had once stated in a church that I hated a liar and a hypocrite, and I was the biggest one I knew.”
Quite literally.
She weighed 600 pounds.
Doggan’s story of overcoming an eating addiction provides an extreme example of a challenge faced by many Americans — including Christians.
Even as medical advances allow people to live longer, unhealthy behavior and preventable illness threaten quality of life, according to the 2012 America’s Health Rankings.
Nearly 28 percent of the population is obese, and more than 26 percent get no exercise, according to the study of the nation’s health, published jointly by the United Health Foundation, the American Public Health Association and the Partnership for Prevention.
A separate study by Northwestern University linked religion to obesity in young adults. According to the 2011 study, young adults who frequently attend religious activities are 50 percent more likely to become obese by middle age than young adults with no religious involvement.
“It’s possible that getting together once a week and associating good works and happiness with eating unhealthy foods could lead to the development of habits that are associated with greater body weight and obesity,” said Matthew Feinstein, the Northwestern study’s lead investigator.
STEPPING OUT IN FAITH

To help combat the nation’s obesity epidemic, an increasing number of Churches of Christ are introducing programs and ministries to promote physical as well as spiritual health, leaders told The Christian Chronicle.
“I think we are getting better at this, but we still have a long way to go,” said Kyle Vath, a deacon for the Central Church of Christ in Cincinnati who works with a non-denominational Christian health center.
“The poor often are the most unhealthy,” Vath said. “They have poor access to care, cheap foods are often least healthy, and many work two and three jobs and have little time to exercise. We, as the church, need to step in and take care of the poor and their health.”
The Sylvan Nook Church of Christ in Richmond, Ind., hosts a fitness walk through its neighborhood on Sunday afternoons. Members also walk on Tuesday nights and ride bicycles on Thursday nights.
“The reason we chose to promote walking was it allowed all ages and fitness levels to participate,” minister Mike Ballard said.
“The fitness walks have been a good way for our members to improve their spiritual health,” he added. “During the walks, we are able to encourage and minister to one another.”
Rachel Curtis, a graduate of Lubbock Christian University in Texas, started a program called P31 Fitness, tied to the woman of noble character described in Proverbs 31.
“I think every woman struggles with weight, eating, self-image and more,” said Curtis, who recently moved to Trenton, Texas, and is looking for a church home. “We developed this program to help women see themselves as God created (them) and to make the most of their health each day.”
Through a program called “Fit for the King,” members of the Collegeside Church of Christ in Cookeville, Tenn., meet for exercise and Bible study.
Chip Pugh, a Collegeside member and head strength and conditioning coach for Tennessee Tech University, oversees the CrossFit Faith program.
“It is our goal to use these sessions for evangelism and in serving young people as a mentoring opportunity,” said Pugh, a former Ohio University offensive lineman.
BODY AND SOUL

At the Memorial Road Church of Christ in Oklahoma City, Heather Bowlan teaches a Body and Soul ladies’ fitness class, mixing spirituality and sweat.
“I do not believe physical and spiritual fitness are exclusive of one another,” Bowlan said. “If our bodies are God’s temple, are we not required then to do what we can to take care of them on Earth? If we are in better physical shape, we can do the Lord’s work better than we could if we were sedentary.”
Zina DiTonno, a member of the Newark Church of Christ in Delaware, said she has a passion for health and fitness “God’s way.”
A graduate of Lipscomb University in Nashville, Tenn., she serves as a personal trainer and encourages physical activities such as yoga.
“Some people have an issue with the word ‘yoga,’” DiTonno said, “but the way I use the name is to refer to a style or type of exercise, not a New Age religious practice. I want there to be no mistaking that I pray to the one true God and acknowledge Jesus and the Holy Spirit in my life.”
She’s working on a manual titled “Inside Out Bible Health,” touting a worshipful approach to fitness, nutrition and wellness.
“I believe that even eating and exercise, if done to the glory of our heavenly father, is a form of worship,” she said.
A WEIGHT-LOSS JOURNEY WITH GOD

Bread. Pasta. Chocolate. Soda pop.
All of the above ranked high on Carlee Doggan’s list of favorites as she consumed six meals a day.
In 1989, at age 40, she went to lunch with her mother and ordered a Double Whopper, super-size fries and a Diet Coke.
After finishing the meal, Doggan recalls looking her mother in the eyes and remarking, “I just don’t seem to be able to lose any weight. It seems like everything I eat sticks to me.”
“If I were you, Carlee, I just wouldn’t eat anything to see if I could lose something,” her mom replied.
Through a series of weight-loss programs and a 40-day fast, Doggan figured out how to drop pounds — 100 here, 75 there.
However, she said, her weight yo-yoed up and down for years until she finally committed herself fully to God.
At the same time, she discovered the power of sharing her successes and trials with a group of confidantes, whose identities she protects.
“My support group helps me focus on my quest to get closer to God,” said Doggan, 63. “It allows me to express myself when I need to, and I can call someone when a crisis occurs.
“I ask God for everything now, and I wait until he gives me the answer,” she said. “I am not my own. I don’t know what is best for me. He is directing my path, and I move out of his way. I love him so hard at times that it scares me.”
Now, she limits herself to three meals a day, rations meat servings and eats salads. She wears a size 8 blouse and size 12 pants.
On her latest weigh-in day, Doggan came in at 155 pounds.
In a recent three-part seminar, she shared her story at the Monroe Street church.
She’s producing a weight-loss journal/workbook called “Freely Eat, A Gift From God.”
“My ministry is to let God’s people know and the world know,” Doggan said, “that if we humble ourselves before him, he can lift any challenge we are having off of us.”