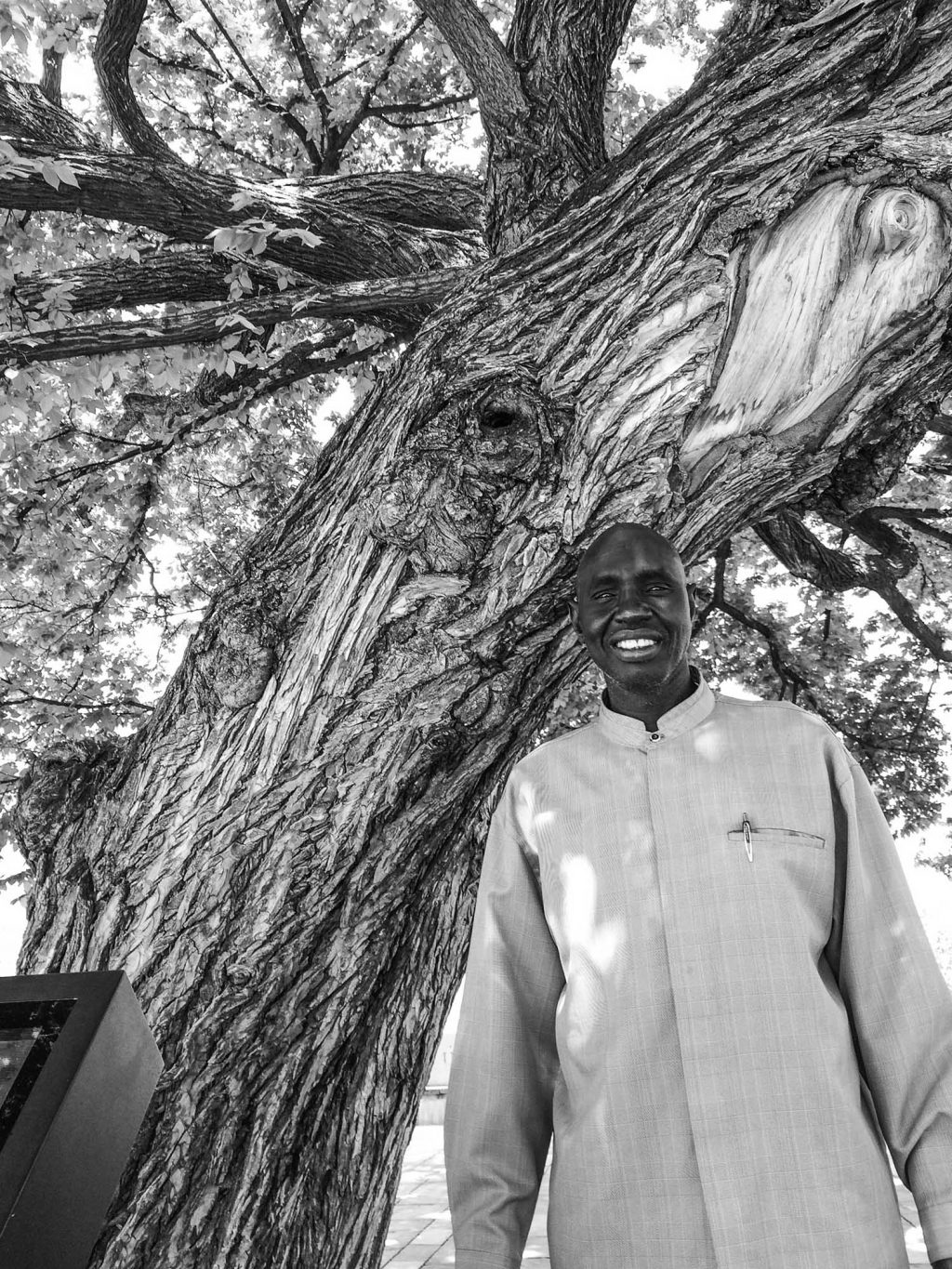 How one man, so familiar with tragedy, uses the memorial of another awful event to see hope and healing.

‘We come here to remember those who were killed, those who survived and those changed forever.

“May all who leave here know the impact of violence.”


I wondered what my friend John Gak thought as he read those words, inscribed above the entrance to the Oklahoma City National Memorial.

John, a member of the Swope Parkway Church of Christ in Kansas City, Mo., was in town for a meeting.

Tall and slender, he’s a Dinka, one of the tribes in South Sudan — an African nation that gained independence barely four years ago.

He knows, all too well, the impact of violence.
“We need places like this.”
John fought for that independence from Sudan’s predominantly Muslim north in a civil war that dragged on for 22 brutal, bloody years. The Sudan Peace Act of 2002 accused the north’s government of genocide during the conflict.

At the memorial, we gazed over a grassy field of 168 empty chairs — some tiny, representing the children who died here in a fertilizer bomb blast, a senseless act of terror, at 9:02 a.m. on April 19, 1995.

But how can those 168 souls, gone in an instant, compare to more than 2 million lost in the unfathomable horror of South Sudan, a country that still cries out for peace and justice?

Surely this display must seem indulgent — trivial, even — to a man like John Gak.

“Oh man, this is beautiful,” he said as we walked through the plaza where the Alfred P. Murrah Federal Building once stood. As we walked down to the field of empty chairs, John told me about more recent bloodshed in South Sudan’s capital, Juba. But this wasn’t the work of the north Sudanese army or Islamic militants. This was the beginning of another civil war, the result of a power struggle as members of the Dinka and Nuer tribes — who had banded together to win independence from the north — turned on each other.

As many as 2,500 people died in Juba, John said, and thousands more perished or lost their homes as the conflict raged, ending only last December with a fragile peace accord.

“We need places like this,” John said as we walked toward the memorial’s reflecting pool. “I do appreciate what the people of Oklahoma City did to remember their own people.

“We should do it in South Sudan, to remember the people we lost.

Too many people in South Sudan claim Christianity as their faith but don’t practice it, John said. They are Catholics or Episcopals because that’s what their parents and grandparents were. Few have cracked open a Bible. Many don’t have access to one. Many can’t read.

John is different. Once a recruiter for the Sudan People’s Liberation Army, a guerilla movement formed to fight the north, he moved to Nairobi, Kenya, in the 1990s to bring Sudanese refugees living there into the fight. In Nairobi, he met a group of Christians and began studying the Bible with missionary Joe McKissick.

John’s legs were “almost too long for the baptistery,” McKissick once told me. Nonetheless, the tall warrior became a Christ follower.

In 1995 he moved to Kansas City with assistance from the Don Bosco Community Center, an agency that assists in resettling refugees.

He became a father figure for several of the Lost Boys of Sudan who fled the brutal conflict in their homeland. (I highly recommend the film “The Good Lie” and the documentary “God Grew Tired of Us” to learn more about the Lost Boys’ incredible journey.)

John longs to bring faith and education to his homeland. He and fellow Christians launched the South Sudan Mission (www.southsudanmission.com) to accomplish this task. He has helped plant a Church of Christ in his hometown, Kongor. He has worked with a faith-based nonprofit, Starfish Foundation, which built a vocational school in his home state, Jonglei.
Related Article: Building of Christian School Brings Hope To South Sudan In 2011, just before South Sudan’s independence, I was blessed to visit the soon-to-be nation. I remember a primary school where children sat on broken, concrete blocks, scribbling with pencil stubs in flimsy, baby-blue notebooks provided by UNICEF.

John wants to build Christian schools in South Sudan, but not just to help his people escape extreme poverty. Faith-based learning burns away tribalism, ignorance and hate, he said. “When you know how to read and write, you will understand what the Bible says. The Bible will teach you to love your brother. … The more we learn through the Bible, the more love we give to our people.”

Across Africa — in Ghana, Nigeria, Uganda, Swaziland — I have visited Christian colleges that are training believers to change the fortunes of their homelands. You can read about several of them in this issue. I pray that those of us who have enjoyed the benefits of Christian education here in the U.S. will do what we can to assist these endeavors.

The potential is great — and the consequences of inaction are dire.

In South Sudan, “we thought we had hope for a nation,” John told me, “but we’ve lost so many people.” 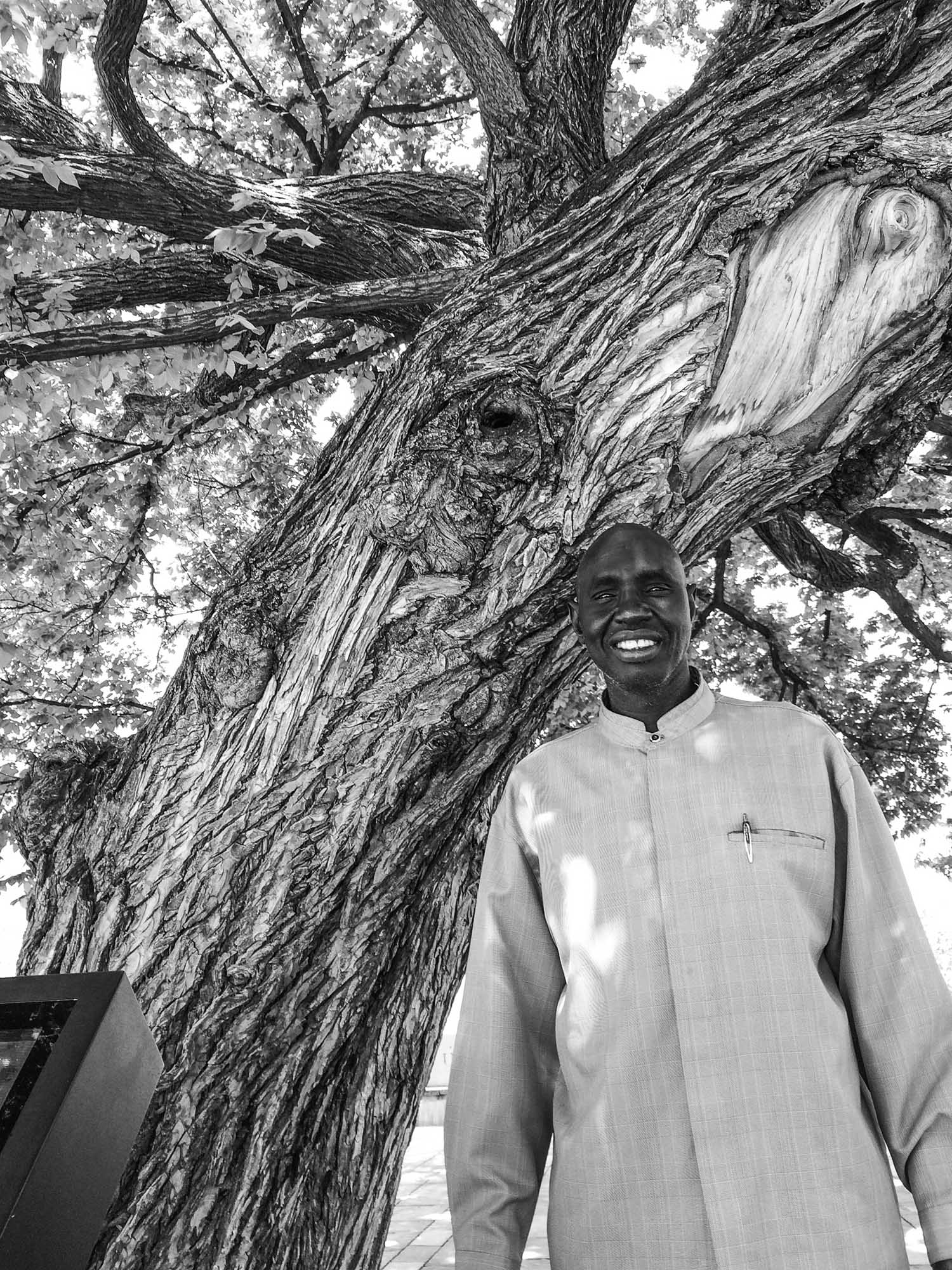 John Gak stands under the Survivor Tree at the Oklahoma City National Memorial.Before we left the Oklahoma City memorial, we paused at the Survivor Tree, a 90-year-old American Elm that once shaded a parking lot across the street from the Murrah building. Somehow the tree endured the bomb blast. Its roots held even as investigators pulled debris from its branches and trunk.

Oklahomans made it their goal to keep the tree alive, and today it thrives. Every time I visit, it seems larger, stronger, than before.

It easily shaded my tall, slender friend, John Gak. I remember his wide smile as he stood under its branches, bursting with new, green growth. May his country also receive God’s power to thrive through hardship. May his people find nourishing soil and grow, deeply rooted in faith and truth.

May we never forget the lessons of violence, and may we be changed forever.