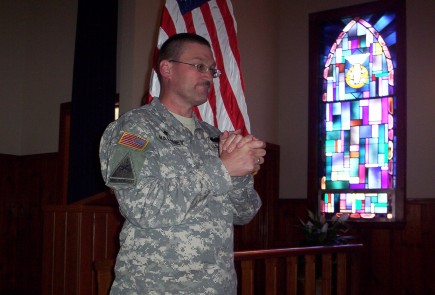 Staff Reports
An Army chaplain who is a Church of Christ member is ministering to victims of the Fort Hood shooting rampage that killed 13 people and hurt at least 30.
Area church members are joining the rest of the community in donating blood as congregations plan special services for Sunday, ministers said.
At the Southside church in Killeen, Texas, minister Keith Cormier said the mood is somber, the military community subdued.

More than half of Southside’s 200 members have direct ties to the military, and so the hours since the shooting have been spent “tracking down as many folks as we possibly could,” Cormier said. So far, all members and families are accounted for, he said.

As for Sunday worship, “We’ll definitely be spending more time in prayer, in light of what has happened in our community,” he said. “I’ve changed my sermon some, just to re-emphasize to folks that we have to factor God into our lives every day.”

Lt. Col. Les Maloney, a member of the Western Hills church in Temple, Texas, said he and other chaplains reported to the Fort Hood hospital emergency room about 1:45 p.m. Thursday.
“I then spent the rest of this evening in the ICU ministering to the victims,” Maloney said in a brief e-mail to The Christian Chronicle on Thursday night.

Maloney said he expected to report back to the hospital early Friday “to serve my rotation in the schedule of chaplains we have set up to man the family reception area — to minister to the families of the victims.”
The Army makes official notifications to relatives and next of kin before any names of victims are released. Maloney said he was precluded from sharing any information about victims. He is an alumnus of Harding University Graduate School of Religion in Memphis, Tenn.

Ripple effects of the tragedy were felt almost immediately within the Northridge church in Shawnee, Okla. Former member Jennifer Morgan Hunt’s husband of two months, Spc. Jason Dean Hunt, 22, was among those shot and killed inside the processing unit as he prepared for a second deployment to Iraq.

Jennifer Hunt’s aunt, Cheryl Richardson, and her grandmother, both longtime members at Northridge, said the congregation still considers Jennifer Hunt one of their own through her longtime involvement with the youth group.

The women watched last summer as Jason Hunt proposed to his then-girlfriend at their family reunion, then helped decorate for the ceremony and baked the couple’s wedding cake for their Aug. 22 wedding.

“They were looking forward to really starting their lives together and getting settled after she finished school and he returned from Iraq,” Richardson told the Chronicle.

“Please, please ask your readers to keep Jennifer in their prayers,” she said, adding that Jennifer has three young children.
Jordan Hubbard, minister for the Belton, Texas, church, and Scott Meyer, minister for the Western Hills church, dropped their sermon outlines soon after they started receiving messages on social networking Web sites Twitter and Facebook about the shootings.
The two ministers often collaborate on sermon writing, Hubbard told the Chronicle. From their respective pulpits, both plan to address the frustration their members feel about living in an imperfect world and challenge them to not lose heart. A key text for the sermons is 2 Corinthians 4:8-18, in which Paul tells believers that momentary troubles are “achieving for us an eternal glory that far outweighs them all.”
“The empty tomb testifies that this isn’t the end,” Hubbard said.
The sermon will be Hubbard’s second as pulpit minister for the 700-member Belton church, which meets about 20 miles from Fort Hood.
“We have many ties with the base,” he said. In addition to military families, the church has many retired military members who work in civilian jobs at the base, the minister said. Others work at Scott & White Memorial Hospital in Temple, where a number of shooting victims were sent for treatment,.
None of the Belton church’s members was reported killed or wounded in the shootings, said Hubbard, who formerly served as youth minister for the Belton church. He moved about three years ago to preach for the Winters, Texas, church.
He returned recently to the Belton church, which earlier this week launched a “40 days of prayer” initiative to seek God’s guidance in reaching out to its community.
At two other congregations nearby — the Killeen church and the Westside church, also in Killeen — church staff members reported no members or extended family wounded or killed.
“We sure never expected to have to worry about our soldiers while they were at home,” said Michael Walls, evangelist at Westside.
The Western Hills church is about 30 minutes from Fort Hood’s front gate and also has several soldiers among its members, including Maloney. Meyer said church leaders had checked with the soldiers, and none was among those killed or injured.
He prays that Sunday’s special sermon will offer hope and comfort for the church and the community.
“We’ll try to get out of the way as best we can and let God do some healing,” Meyer said.

Fort Hood has dealt with more than its share of deaths from the wars in Iraq and Afghanistan, but the rampage at home is different, Meyer said.

“This is expected overseas. It’s not expected when they’re sitting there in what they refer to as their home,” Meyer said. “This is the equivalent to somebody walking into their home and creating a tragedy.

“It’s not on Iraq soil or Afghan soil. That’s rocked a lot of people.”

Texas Sen. John Cornyn, who attends the University Avenue Church of Christ in Austin, said his “hearts goes out to the victims” of the rampage and their families.

The Republican senator said he’s praying for everyone touched by the tragedy.

“Fort Hood is one of our nation’s finest and largest military installations, and a place that has long been a source of pride for Texans, and for all Americans who value the selfless service and sacrifice of our men and women in uniform,” Cornyn said in a written statement.

He advised against jumping to rash conclusions about the Fort Hood tragedy.

“It is imperative that we take the time to gather all the facts, as it would be irresponsible to be the source of rumors or inaccurate information regarding such a horrific event,” Cornyn said. “Once we have ascertained all the facts, working with our military leaders and law enforcement officials on the ground, we can determine what exactly happened at Fort Hood (Thursday) and how to prevent something like this from ever happening again. We do not yet have these details.”

According to The Associated Press, soldiers who witnessed the rampage reported that the gunman shouted “Allahu Akbar!” — an Arabic phrase for “God is great!” — before opening fire.
Lt. Gen. Robert Cone, the base commander, said officials had not yet confirmed that the suspect, Maj. Nidal Malik Hasan, a lifelong Muslim, made the comment before the shooting spree, AP reported.
In such a situation, what should the Christian response to Islam be?
Some ministers contacted by the Chronicle weighed in on that question.
“The Christians response to Islam should be to love them more than ever before,” said Aaron Shaner, youth minister at the Bayside Church of Christ in Virginia Beach, Va.
“Many times we treat people who are of different faiths like they have committed the gravest of sins, as if there sin is worse than any other,” Shaner said. “I do agree that false worship can have serious consequences, but they are sinners just like you and me. Why not start with things they believe about the divine that we agree with and work to build a relationship with them from there.”
Keith Brumley, minister of the Northtown church in Milwaukee, referred to what Jesus said in Matthew 5:43-48 about loving enemies.
“Major Hasan no more represents Muslims or Islam than Scott Roeder represents Christians or the Christian faith,” Brumley said. Roeder is charged in the May 31 fatal shooting of abortion provider Dr. George Tiller in his Wichita, Kan., church.
Additional reporting: Bobby Ross Jr. and Erik Tryggestad