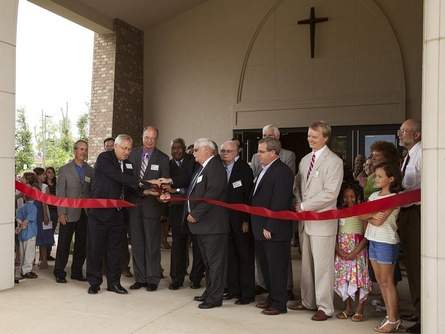 
In a front-page report two years ago, The Christian Chronicle shared the stories of hope that emerged after a tornado destroyed the Central Church of Christ building in Tuscaloosa, Ala.
Last year, the Chronicle reported on the challenges faced by the congregation as it endeavored to rebuild at its original location.
The latest news: On Sunday, the congregation celebrated the opening of its new building.

From left, Don Wheeler, Burrell Thorne, William Tinker, Joe Higgins and Glenn Griffin are honored with ribbon-cutting duties during the dedication of the new Central Church of Christ building on Sunday. (Photo by Erin Nelson, Tuscaloosa News, via tuscaloosanews.com)

TUSCALOOSA — In the initial moments after the April 27, 2011, tornado, members of Central Church of Christ worried about what would happen to their beloved church, whether they could rebuild and come back after the tornado destroyed their church building. But the worry and doubt didn’t last long, said pastor Lee Jamison on Sunday.
“The church is not the building, it’s the people,” Jamison said during a dedication service Sunday afternoon. “Everything we lost was just physical, what was remaining was faith, hope and love — what was only there from the beginning.”
Central Church of Christ reopened its doors Sunday in a new building at its original location on Hargrove Road after being displaced since the tornado. For the past two years and three months, the church has worshipped at the Alabama Fire College.
“We stand here today joyous, but the joy came to the surface long ago, the day after (the tornado)” Jamison told the crowd of several hundred. “What I saw in the eyes of the people came to help was joy, and even thought there was a heavy weight on our shoulders, we did the only thing we could do and look out on our community and see people worse off.”