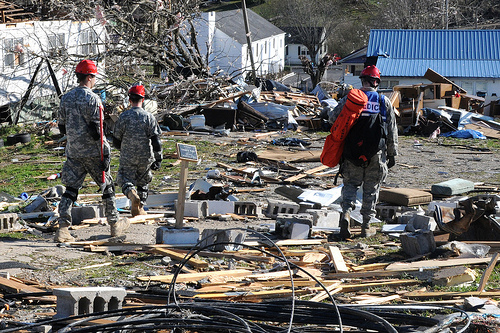 The scene in West Liberty, Ky., after the tornado. (Photo via WFPL News, www.wfpl.org)

Hutchinson’s late father, Charles, a longtime minister who died in 1996, oversaw the construction of the brick building, where the 40-member congregation had worshiped since 1968.
While the building’s walls remain standing, “the roof was damaged bad, and the inside was damaged bad,” said Rusty Hutchinson, 59. The church’s insurance coverage on the building will not be enough to rebuild, he said. For now, the congregation meets in members’ homes.
“It devastated the town,” Hutchison said of the tornado, which claimed a half-dozen lives in West Liberty. “There’s nothing left. .. We’d just request the prayers of everyone. Not just for the congregation here but for everyone who lost their homes.”
The home of Hutchinson’s mother, Reva, sustained severe damage. State police rescued her, but her family could not locate her for 24 hours after the storm, her son said.
“We’re just grateful nobody was seriously hurt or killed from the congregation,” he said. “It could have been worse — a lot worse. Prayer sure helps a lot.”
The Church of Christ was not the only church hit by the tornado. Methodist, Baptist, Church of God and Christian churches were struck as well, the Lexington Herald-Leader reported.
To help with the rebuilding effort, send checks to the West Liberty Church of Christ, Attn.: Danny Clark, Treasurer, 111 Oakwood Lane, West Liberty, KY 41472. For more information, call Clark at (606) 743-1158.