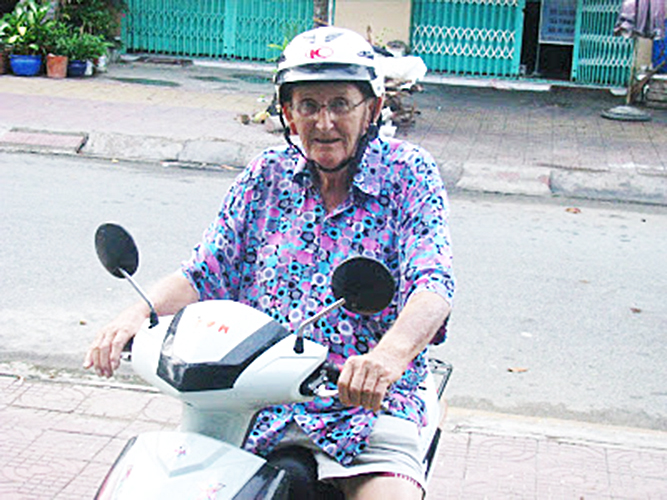 Tom Tune — a missionary sailor, ship builder, tailor, carpenter and performer of countless other tasks — died Feb. 5 in a veterans hospital in Little Rock, Ark. He was 83.
A funeral service is scheduled for 11 a.m. Saturday, Feb. 16, at the J.H. Churchill Funeral Home, 201 S. 3rd St., Murray, Ky. Visitation is Friday, Feb. 15, from 5 to 8 p.m. at the funeral home.
Tune was a longtime missionary to Asia and the South Pacific. He and his family served in Hong Kong for five years. In 1972, he and a group of church members bought The Christian Chronicle and moved it to Nashville, Tenn. Tune served as this publication’s business manager for two years.
In a 2008 feature, we detailed Tune’s work:

Longing to return to mission work, Tune bought the Dorcas Sue, which he named after his daughter, in 1979. He traveled to South America and the Mediterranean, delivering medicine, fitting the poor for eyeglasses and teaching about Jesus. In 1991 he sailed for Hong Kong. He stopped at the Cook Islands, where he found opportunities to serve the people of the South Pacific.
…
Tune’s nautical skills brought him to Vietnam  about five years ago, after Arkansas-based Partners in Progress asked him to oversee construction of a medical mission boat. Launched last March, the Ship of Life makes trips along the Mekong River in Cambodia.
During the boat’s construction, Tune started meeting with a handful of Vietnamese Christians.
Baptisms followed, and the group has since grown to more than 100.
“I was told not to teach or preach or I would get kicked out. The Lord only knows how I have managed to stay,” Tune said, adding that God “has blessed us so very much — as only he could.”
In addition to nurturing the young church, Tune has launched “Tom’s Kids,” a program for impoverished children in Ho Chi Minh City. Many of the children are descendants of Vietnamese who supported the Americans during the Vietnam War. They have little money or social status.

Most recently, Tune worked in Can Tho, Vietnam. A longtime friend and ministry partner, Steve Hawley, visited him there in 2012.
“The work in Can Tho won’t perish,” Hawley wrote of his friend. “Tom took care of the vision part. But we’re sure going to miss him on the journey he laid out for those he loved. When I left Can Tho on July 31, I told him I’d see him next summer. There are no more summers for Tom, but he got the best end of the deal.”
Tune’s son, Mike Tune, is minister for the Church of Christ in Falls Church, Va. In 2009, he said this of his father:

“He has served the Lord in Central America, South America, the Mediterranean and … has begun a church in a country where it is forbidden,” Mike Tune said. “He just keeps going.
“We’ve talked about what happens when he gets to the end of the road. He told me, ‘Plant me where I drop. I’ll rise with the people I love.’”