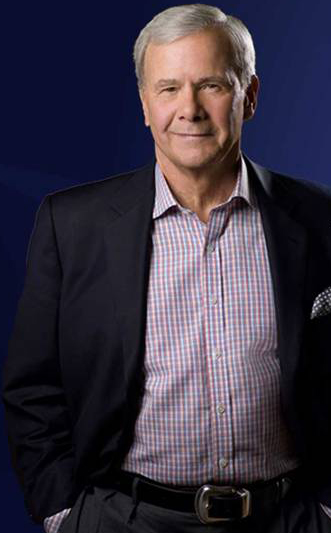 L. Timothy Perrin, president of Lubbock Christian University, has announced that American television journalist Tom Brokaw will be the speaker at the university’s next “An Evening with…” Benefit Dinner Series on October 3, 2013.
“I’m thrilled that Tom Brokaw is joining us for our fourth event in this series.  Mr. Brokaw’s life-long career in journalism and his important work on ‘the greatest generation’ will be of great interest to our guests,” said President Perrin. “We believe that his passion for truth seeking and for thinking critically about matters of importance will provide just the right message for the evening.”
This event will be the fourth benefit dinner for the university featuring a nationally known speaker since the “An Evening with…” series was introduced in 2007 with General Colin Powell.  Continuing the biennial tradition, the university hosted President George W. Bush in 2009 and former Secretary of State, Condoleezza Rice in 2011.  This series has raised funds for student scholarships.