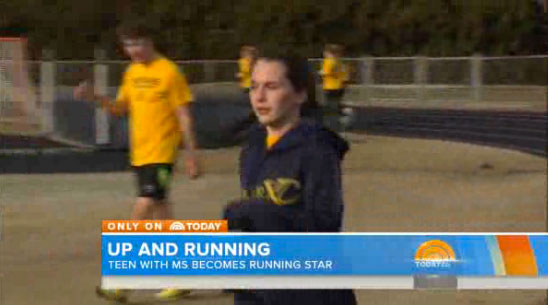 She has gone from being one of the slower runners on her high school team to one of the fastest distance runners in the nation, a rise fueled by an improbable motivation.

Three years ago, Kayla Montgomery, 18, was diagnosed with multiple sclerosis, an incurable yet treatable disease of the central nervous system.

While Kayla can run long distances without feeling pain in her legs, when she stops, her limbs give out and she collapses. As she crosses the finish line, her coach catches her to keep her from falling.

“I don’t feel anything at all,” Kayla said in a TODAY segment Wednesday.

“It kind of feels like I’m just kind of floating,” she added. “There’s nothing underneath me.”

Later this month, Kayla is due to compete in the national indoor track championships in New York and she is headed to Lipscomb University in Tennessee in the fall.

A New York Times on the runner includes this detail.

College recruitment has been another challenge, Montgomery said. When coaches called, she told them she had M.S., and they told her it was not a problem. “But then they didn’t call back,” she said.

Lipscomb University in Tennessee was an exception. She will enroll there this fall on a scholarship.