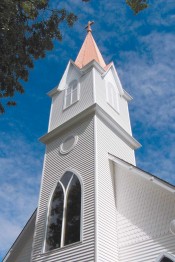 Bobby Ross Jr.
Editor-in-Chief
YORK, Neb. — At 9 p.m. each Sunday, York College students gather at the campus prayer chapel — a restored white church built in the 1880s — for a candlelight communion service.
In fall 2008, when high school soccer player Katie Kynion visited York “on a whim,” that assembly marked her introduction to the small Christian college, which had mailed her a recruiting letter.
“It’s intimate, and they sing songs, and everything’s a cappella, which I was not used to,” Kynion said of the Sunday night service. “They take communion. Someone gives a devotional. And then there are more songs and fellowship afterward.
“I had never been to anything like that before. That was special to me,” added Kynion, a soon-to-be sophomore from Olathe, Kan., about 250 miles southeast of this Nebraska farming community of 8,000 souls.
Kynion exemplifies a growing national trend: She was among more than 2,500 freshmen from outside Churches of Christ who chose to attend a college or university associated with the fellowship in fall 2009. That number represents a 34-percent increase in the last 10 years, according to a study by Flavil Yeakley, director of the Harding Center for Church Growth in Searcy, Ark.
A decade ago, Church of Christ members comprised 70 percent of freshmen at 18 Christian higher education institutions studied by Yeakley. By fall 2009, that figure dropped to 53 percent.
Until a few years ago, a majority of students came to York from Church of Christ backgrounds.
But in fall 2009, 58 percent of York freshmen — including Kynion — listed their religious affiliation as something other than Church of Christ.
“Many students are brought to Christ while on this campus,” York President Steve Eckman said. “York College is not only located on the mission field — it is the mission field.”
York’s changing enrollment patterns reflect the appeal of a Christian liberal arts education to students outside Churches of Christ, leaders say.
But that’s only part of the story — at York and elsewhere.
A shrinking pool of potential Church of Christ students in Nebraska and surrounding states also makes it crucial to recruit from a wider base, said Rick Eldred, York’s director of church relations and a minister at the East Hill Church of Christ, next to campus.
This past school year, York drew 262 of its 432 full-time students — 61 percent — from Colorado, Iowa, Kansas, Montana, Nebraska, North Dakota, South Dakota, Wisconsin and Wyoming.
“Our congregations in this area are aging, so the numbers of potential students are smaller than in the past decade or so,” Eldred, a longtime church observer in Nebraska.
“I don’t see those numbers increasing,” he wrote. “York College increased enrollment will grow not from our own fellowship but from the broader ‘Christian’ fellowships. I’m sure this is the case with most of our sister universities as well.”
Maintaining — or better yet, growing — enrollment is essential at a college such as York, which has struggled financially in recent years, experts say.
Just last year, The Christian Chronicle reported that York was among three colleges associated with Churches of Christ that were deemed in fragile financial condition by a U.S. Education Department analysis. The others were Rochester College in Michigan and Ohio Valley University in West Virginia.
Eckman said then that $9 million in debt — much of it related to the construction of two new residence halls — caused his college to make the list. The residence halls give the college more room to house students, but it takes time to increase enrollment to fill the new dormitories, he said.
In the last year, York experienced an 8.5-percent fall enrollment increase and a 17-percent rise in the spring, the president said. The college ended the 2009 fiscal year in the black and improved its financial condition enough to be removed from the federal watch list, he reported.
“While we have a long way to go financially, I believe that … we have made progress in many areas during this one-year period,” Eckman, a York alumnus who took over as his alma mater’s president last year, wrote in a recent report.
‘CHRIST-CENTERED EDUCATION’

Along with dealing with budget concerns, York also has given its mission statement a makeover — one designed to put more focus on the college’s faith-based nature, Eckman said.
“The mission of York College is to transform lives through Christ-centered education and to equip students for lifelong service to God, family and society,” the new statement reads.
Operated by members of Churches of Christ since 1956, York College sits at the crossroads of Interstate 80 and U.S. 81.
As might be expected in the “Cornhusker State,” corn is the major local crop, along with some soybeans and milo. Catholic and Lutheran parochial schools also have a presence in the town.
“We have so many people that work at York that could make more money and have greater opportunities (elsewhere) … but they positioned themselves here in a quiet place to do work that’s very important and significant,” said Tim Lewis, who attended York in the early 1980s when it was a junior college.
“These students (from Churches of Christ) that stay in the area go back to these churches, and they will be the leadership at these churches in the future. So it may not seem important on the outside — this small little place, this little outpost up here in Nebraska ­— but for this whole region … it’s very vital to the church,” Lewis said of York College.
For seven years, Lewis has served as York’s full-time campus minister. He works with 15 student ministry interns who help organize a weekly campus devotional, Bible studies and small-group spiritual activities.
“The challenge is not to assume all our students know the Bible,” Eckman said. “We must engage them at entry level. How we introduce them to God, Christ and the church is vitally important. This starts in their freshman Bible class and in daily chapel. We can’t assume they have a biblical knowledge base.”

A CHURCH OF CHRIST SCHOOL?

Mitch Roush, a recent York graduate, is the son of longtime choir director Clark Roush and alumni and community relations director Sue Roush.
While he attends a Church of Christ, he rejects that label.
“I learned really quickly just how radical Jesus is in my first year here,” said Mitch Roush, 22, who majored in drama. “We’re not a Church of Christ school. We are a school that is desperately trying to get Jesus to these people, and to understand why the foot of the cross is so important in our lives.
“I’m telling you right now, the moment I threw out all of those traditions and I just read the Gospel and tried to be like Jesus and allowed the Holy Spirit to be my source of courage … I noticed that God was changing lives,” added Roush, who enjoyed baptizing some of his York friends.
But Kynion sees York from a different perspective.
Told that the college’s student breakdown is about 50/50 between Church of Christ members and other students, she found the numbers difficult to believe.
“It feels like there’s a lot more Church of Christ students here,” she said. “Everyone seems to be.”
At home, Kynion worships with a community church that uses drums and guitars and does not partake of the Lord’s Supper every Sunday. This summer, she’s serving as a ministry intern with Hope Alive Christian Center in Overland Park, Kan.
At York, she said, “I’ve talked to a lot of Church of Christ people that don’t believe in being spirit-filled. I don’t really know where I stand on that in my life right now.
“And then I’ve talked to some other people that have said, ‘To be saved, you have to be baptized.’ And I think baptism’s great. I was baptized; it’s a great faith statement. But I’m not sure that I believe you have to be baptized to be saved.”
However, she remains pleased with her decision to attend York. The experience, she said, has challenged her — and helped her grow — spiritually.
As for Sunday night, she still loves the candlelight communion service that drew her to York.

“There’s just something about it that seems so pure,” she said. “It’s like, ‘This is all I have and I’m laying it out there right now.’ And that is my worship. That’s what I really like about it here.”
• • •
The Christian Chronicle interviewed York College
students during a recent visit to the Nebraska campus. A few excerpts:
Marissa Petrilli | Bakersfield, Calif.
Petrilli questions whether women need to be silent in church and if baptism is essential to salvation but appreciates the faith-based atmosphere at York. “Obviously, my views … are a bit different than the Church of Christ,” she said.

Mark Smesrud | Minot, N.D.
Smesrud, who grew up in a Church of Christ, gained ministry experience at York and plans to become a youth minister. “We really push for community, but we also emphasize such things as baptism,” he said of York.

Renee Willard | Golden, Colo.
Willard has a Baptist background but said York has strengthened her faith. “You can still be godly people and love each other and worship the same God even though you read the Bible and the same words and interpret them differently,” she said. “That’s all anyone can do.”