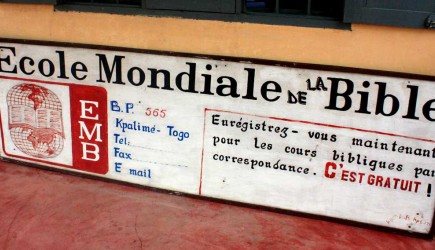 Erik Tryggestad
KPALIME, Togo — Koffi Adorshie found Jesus, or perhaps Jesus found him, in the unlikeliest place — Saudi Arabia.
Born to a Muslim family in the tiny West African nation of Togo, Adorshie begged his parents to send him to the Middle East for higher education.
There, in the Islamic holy city of Medina, he studied under a Christian professor.
“I couldn’t believe it,” Adorshie said. “He started preaching to me, presented me with the Bible. He was able to convince me.”

Adorshie’s parents were equally stunned when their son returned to Togo and shared his newfound Christian faith. Eventually, his family accepted Christ, he said.
Adorshie now preaches for a Church of God in Kpalime, a small city in southern Togo, near the Ghana border.
He’s also a student in a two-year training program at the Center for Biblical Studies.
Willie Gley, a Ghanaian-born Church of Christ minister and coordinator for World Bible School, helped the Kpalime Church of Christ launch the center about four years ago as an outreach ministry — and as a means of training future church leaders.
Evangelism is difficult in the French-speaking nation, said Selom Assoklou, a graduate of the center who preaches for a small Church of Christ in the town of Nyiveme.
Christian groups have grown in southern Togo in the past half-century, but the region’s Churches of Christ are relatively unknown, Assoklou said.
“Because the Churches of Christ came very late, the denominations had taken over the place,” he said. “So it seems we are competing with the denominations.”
One goal of the Center for Biblical Studies is to train ministers for Churches of Christ, but the program is open to any student, regardless of church affiliation, Gley said. Of the center’s 13 current students, most come from outside Churches of Christ. Some, including Assoklou, were baptized during their studies.
Sitting on the porch of the center’s single classroom, Adorshie floated excitedly from English to French to Ewe, a local language, as he described the center’s course on Genesis.
The instructor, Cephas Nyemanta, has helped him realize that God’s plan of salvation is there, “right from the beginning,” he said. The training has revealed “things I didn’t know before — even though I was a preacher,” he added.
The Kpalime Church of Christ also reaches out through French World Bible School lessons, said Gley, himself a convert through the Texas-based correspondence ministry. He first learned about Churches of Christ in 1981, after finding a yellow church tract sticking out of the mud.
“I always tell people, wherever they’re going, to give out tracts,” Gley said. “Don’t worry if someone throws it away. They are going to help you. They’re planting a seed.”
About Togo
LOCATION: West Africa, east of Ghana
POPULATION: About 6.8 million
RELIGION: Indigenous beliefs: 51 percent; Christian (mainly Catholic): 29 percent; Muslim: 20 percent
HISTORY: Formerly French Togoland, Togo gained independence in 1960.
CHURCHES OF CHRIST: Workers from Oklahoma and Ghana launched mission efforts in the 1970s and ‘80s. American mission teams have worked in the east and north. Today the country has about 30 congregations.
FOR INFORMATION on the Kpalime Church of Christ, contact [email protected] or the Blanco, Texas, Church of Christ at (830) 833-4884.
SOURCES: interviews, cia.gov, news.bbc.co.uk