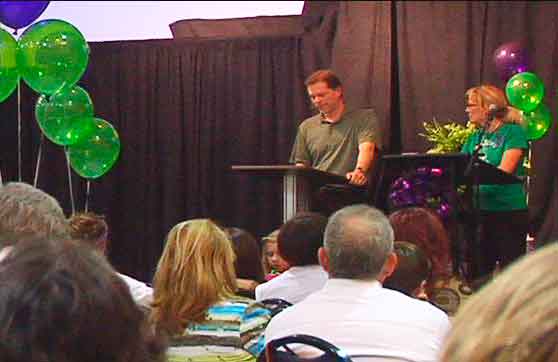 Ron and Nan Deal speak at the Southwest Church of Christ in Jonesboro, Ark. (Photo via www.kait8.com)

Ron and Nan Deal returned to the Southwest Church of Christ in Jonesboro, Ark., recently. The couple talked about the legacy of their son, Connor, who died at age 12 on Feb. 17, 2009, about a week after contracting pneumonia, TV station KAIT reported.
“His fingerprints are all over this building,” Nan Deal said of her son and the Southwest church.
The family attended the Southwest church before moving to Amarillo, Texas, a few years ago, where they attend Hillside Christian Church, Amarillo South. Connor died in Texas on Feb. 17, 2009.
“When a child dies, you want to find their voice,” Ron Deal said. “You want to know that who they were has not be forgotten.”
The Deals honored their son’s memory by establishing Connor’s Song, an effort to rescuing orphans around the world from child trafficking and modern-day slavery. The Deals partner with Touch a Life Foundation, a Coppell, Texas-based nonprofit that seeks to end child trafficking in Cambodia, Vietnam and Ghana. 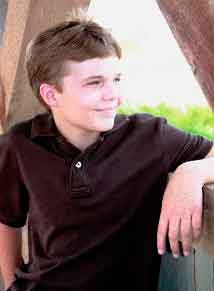 Touch a Life was launched by Pam and Randy Cope, whose story is similar to the Deals. The Copes lost their 15-year-old son, Jantsen, in 1999 to a heart defect. The Touch a Life ministry grew out of the Copes’ efforts to honor their son’s memory.
The story of Touch a Life’s involvement in Ghana is a personal favorite of mine.
In 2006, Pam Cope read a story in the New York Times about child slavery on Lake Volta in Ghana. She contacted agencies in the West African nation that could help free the children she had seen in the newspaper article. She also contacted her brother-in-law, Mike Cope, then minister for the Highland Church of Christ in Abilene, Texas, who referred her to the Village of Hope, a church-supported children’s home and school near Ghana’s capital, Accra. (See our recent blog post about the Village of Hope)
Pam Cope assisted in the rescue of seven Ghanaian children, who were brought to the Village of Hope.
She wasn’t the only one who read that New York Times story. Oprah Winfrey also had seen the piece and launched an effort to save the children in the story. When correspondents for The Oprah Winfrey Show arrived in Ghana, they found that the “magnificent seven,” as they had come to be known, were safe and sound, thanks in part to the Church of Christ ministry. 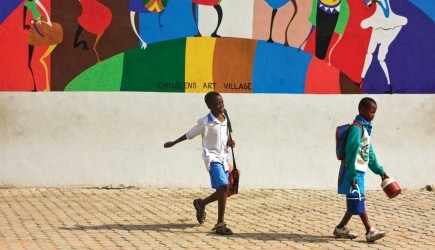 Students walk through the Children’s Art Village plaza outside Hope Christian Academy, part of the Village of Hope ministry. The Touch a Life ministry helped with funds for the Art Village. (Photo by Erik Tryggestad)

In 2007, Pam Cope appeared on the Oprah Winfrey Show. Here’s my report on that appearance, and a New York Times follow-up story that mentions the Village of Hope.
Pam Cope invited Nan Deal to travel to Ghana and participate in the work herself. Nan Deal kept in touch with her husband in the U.S. as she helped in the rescue of two brothers, ages 6 and 8, from near-slavery among the fishermen of Lake Volta.
Here’s an excerpt from Connor Deal’s CaringBridge page in which Ron Deal describes his reaction to the rescue:

As my wife sat in a boat with two rescued children and I sat on the floor of my house crying, trying to process what was happening. “Now let me see if I have this straight,” I thought to myself. Twenty-one months ago, my son Connor was being taken even as Nan and I saw a movie about a child taken for child trafficking. And now, my wife is half-way around the planet taking back two children who were taken into child trafficking. Is this real? Who is this God that I serve? How great is His power to redeem, to bring beauty from ashes! And that’s when I echoed back to God the words of Job. “God, for a year and a half now I have been calling into question things I did not understand, things too wonderful for me to know. And I have seen now who you are and what you are capable of; my ears had heard of you, but now my eyes have seen you. Therefore, I despise myself and repent in dust and ashes.” (see Job 42:1-6)

At the Southwest church, Nan Deal said that establishing such an effort in her son’s memory is one step toward hope and healing.
To contribute, see Connor’s Song.