However, he insists he’s not burned out.

Two months after Hurricane Harvey, the Westgate Church of Christ — where Williams serves as the preaching minister — remains active with disaster relief in this southeast Texas city of 120,000.

“It’s tiring, but I think it’s something we can continue to do because the need is great,” Williams said. “And I think the cause of the kingdom is blessed through being able to reach out in this way.”

Technically, Harvey was a tropical storm, not a hurricane, when it reached Beaumont. Nonetheless, the rain — 26 inches in 24 hours — proved devastating as thousands of structures flooded.

Later, the congregation shifted to housing and feeding Christians who came from across the nation to help gut, clean and restore deluged homes. To coordinate the volunteer teams, the church turned to the Churches of Christ Disaster Response Team, known as DRT.

More than 1,100 volunteers from 33 states have helped DRT at three Texas locations: Beaumont, Portland and Wharton, the ministry said in a recent newsletter. The elders of the Cassels Hill Church of Christ in Vandalia, Ohio, oversee DRT.

“Over 1,100 families have been helped by these volunteers, but there are many more families still waiting for someone to help them,” the DRT newsletter said.

The Meadows Church of Christ in Beaumont has joined with the Westgate church in the disaster relief effort.

“By sharing the work with us, they have helped us do so much more than we could have done alone,” Williams said. 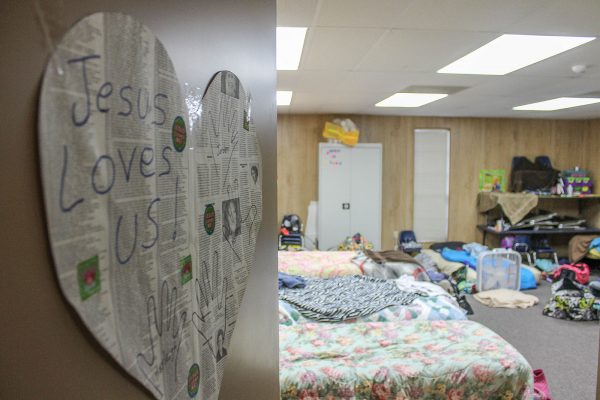 The Westgate Church of Christ in Beaumont, Texas, has equipped classrooms to house disaster relief volunteers.

In a recent interview with The Christian Chronicle, Williams discussed the recovery work and lessons learned:

• On the facilities and helpers: “We’ve got a shower trailer in the church parking lot, and we converted some bathrooms in one of our buildings into shower rooms just so we can take care of the needs of people coming in. We’ve had volunteers come in from Indiana, Georgia, Mississippi, Florida, Arkansas, Oklahoma, Missouri. Who am I forgetting? Texas. And one from Canada, eh. They just keep coming. And it’s a blessing for us to be able to do that.”

• On how long the work might take: “We are realizing that it’s a marathon and not a sprint, and one thing our elders are trying to figure out is: What does it look like a month from now? Or six months from now? I don’t think that this is going to be something we’re looking at a year from now. But a month from now, I think we’ll still be. Six months from now, I hope there’s some kind of exit plan. Even though the devastation is massive and the need is great, it’s more than one congregation can do.”

• On what has surprised him most: “The consistency of how many volunteers are willing to take vacation time to come help. We have a guy who is here — he sold everything he’s got, and he’s here until January. He just said, ‘I heard about this, and this is what I want to do.’ He’s 24 years old, sold all his stuff, and he’s down here working. We’re two months out from the storm, and we still have people who are volunteering. Looking past Thanksgiving, we have people we know are wanting to come down. So just the generosity of the individuals who are taking that time and giving of their time and resources and money to do this.” (The church has received more than $100,000 in contributions to help Harvey victims.)

• On what he has learned: “Be careful what you pray for. Be specific. But the sermon that I preached right after the storm is: A lot of times, storms and trials reveal people for who they are. And I have seen some really great things in people, and I have seen some things that are not so great that were revealed by this storm. We all wear masks, and we all have ways of protecting who we really are. But then in a crisis, who we really are comes out, and it’s been revealing.”

• On the role of Christians in disaster relief: “It’s an opportunity. I’ll tell you this: In our community, churches have done far more than the government has to help people. And I really think that it’s in times like this that we can really shine and that we should shine. That’s how we introduce Jesus to our neighbors — by being there for him in times like this. We’re not an organization that’s designed to muck out houses and hang dry wall and distribute water, but that starts the relationship that helps us transition to, ‘Yeah, dry wall is important, but there’s something more important, and I want to talk to you about him.’” 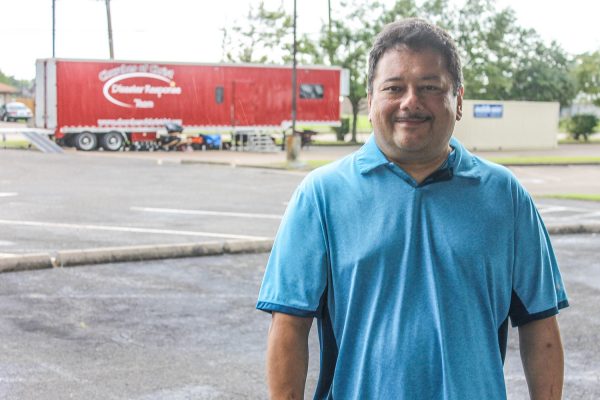 Minister Tony Williams at the Westgate Church of Christ in Beaumont, Texas. A Churches of Christ Disaster Response Team trailer can be seen behind him.