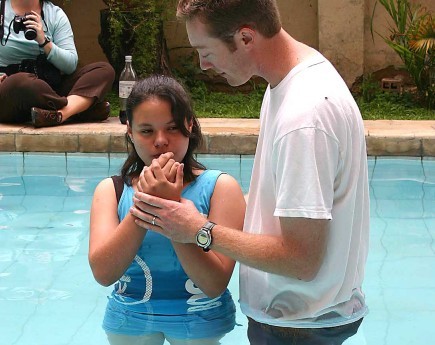 Erik Tryggestad
A bus carrying a Church of Christ youth group in Bolivia rolled down an embankment and threw passengers up to 100 yards, killing three teenage girls and seriously injuring four other church members.
The girls who died — Belen Vargas, Dina Vargas and Ariana Lastra — were part of a group of 12 teens and four adults from the Cochabamba, Bolivia, church on their way to a youth retreat in Comarapa, according to news reports.
The driver of the bus, contracted by the church for the trip, apparently lost control of the vehicle on a straight stretch of road. The bus left the road and rolled down the embankment for about 70 to 100 yards.
Police reports list excessive speed and brake failure as likely reasons for the June 30 crash.
Injured survivors were taken to a hospital in Cochabamba. They include:
• Belen Vargas’ father, Miguel Vargas, who suffered serious injuries in the wreck and was in a coma July 1.
• Josh Marcum, a member of the team that planted the Cochabamba church two years ago. He sustained broken ribs and was scheduled to be released July 2.
• J.D. Sandoval, who suffered a severe back injury. Sandoval is the son of Butch and Patricia Sandoval, members of the Cochabamba church-planting team. J.D. Sandoval and his wife, Rachael, are serving as interns with the ministry and were helping to supervise the youth group trip. Rachael Sandoval received cuts and bruises, but was released from the hospital.
• Rebeca Chavez, a teenager, received leg injuries that require surgery.
Other teens suffered minor injuries in the wreck.
The Austin Avenue Church of Christ in Brownwood, Texas, supports the church-planting team. Roland Bowen, the church’s education director and involvement minister, and his wife, Carol, are scheduled to travel to Bolivia July 3 to minister to the victims’ families and fellow members of the Cochabamba congregation.
“They’re going to be in pain and suffering — physical and emotional — for a long time,” Roland Bowen told The Christian Chronicle. The minister asked church members to pray for the Cochabamba church.
Several members of the church-planting team, including Gary and Laura Bull, were on furlough or visiting relatives in the U.S. when the accident happened. As they make plans to return to Bolivia, the Bulls are posting updates on a blog.
“Many of our brothers and sisters in Cochabamba are poor and cannot afford to pay for the medical treatment,” Laura Bull wrote in a recent post. “Miguel, who is in a coma and has already lost his daughter, Belen, in this tragedy has two other children at home who will need care. This family has suffered tremendously over the past two years. Miguel’s wife and the children’s mother passed away two years ago.”
Julie Marcum, wife of Josh Marcum, posted an expanded list of injuries and more details at jjmarcum22.blogspot.com.
“We are heavy-hearted over our losses,” she wrote. “Many of our families arediscouraged, worried and grieving.
“But it was heart-warming to see theoverwhelming support from the rest of our church. Many waited lastnight in the cold night air outside the hospital until past 4 am.Others manned the contact center and answered the many phone calls.Still others made the long drive out to the crash site with blankets tohelp bring back injured.
“Today every hospital waiting room was filledwith our church members, there to encourage and pray.”
For updates and to contribute to families in need, see cochabambayouthgroup.blogspot.com.