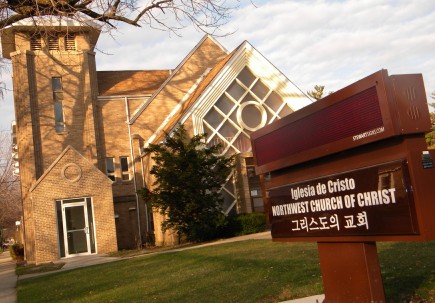 At this Chicago congregation, members worship in English, Spanish and Korean as the church serves a diverse population.

Bobby Ross Jr.
Editor-in-Chief
CHICAGO — It’s the Bible class hour on Sunday morning.
A half-mile off busy Interstate 94, in a working-class neighborhood lined with bungalows, a woman walks her dog. A teenager rides his skateboard.
Inside the Northwest Church of Christ, a two-story brick building with red carpeting and wooden pews, deacon Rene Torres Jr. teaches Spanish-speaking adults in the auditorium.
Downstairs, elder Alan Bain unrolls a colorful map of Old Testament times as he makes a point to the English-speaking adults — white and black — seated in a circle. In a nearby classroom, a handful of Korean speakers, led by minister Paul Chae, sit at a table with their Bibles open and coffee and doughnuts in their hands.
Upstairs, 7-year-old Joon-Seo Choi and two girls with bows in their hair draw pictures and play with Bible character cutouts in the elementary-age class.
“It’s all Koreans today,” says teacher Michelle Bain, Alan’s wife.
The nursery and preschool class taught by Tricia Stroud and Laura Odum,wife of minister Patrick Odum, reflects more of a Spanish flavor.
“Can you say hi?” Laura Odum asks two boys as a visitor enters.
“Hola!” the boys exclaim.
•

For decades, transplanted white Southerners — many of whom came to theWindy City to find work during the World War II era — provided thebackbone of the Northwest church.
With early ministers such as W.B. West Jr. and J.D. Thomas, both keyRestoration Movement figures, the congregation grew and thrived.
After leaving Chicago, West started the graduate Bible program atPepperdine University in Malibu, Calif., and later launched HardingUniversity Graduate School of Religion in Memphis, Tenn.
Thomas spent 33 years on the Bible faculty at Abilene Christian University in Texas, including a decade as department chairman.
Both served at the Northwest church while pursuing doctorates at the University of Chicago.
In its heyday, the church drew regular Sunday crowds of more than 300and helped establish other congregations in the city and suburbs.
“I guess we kind of reached our peak in numbers in the early ’70s,”said Alan Bain, one of two current elders serving a congregation halfthat size. “Then we were kind of victimized as the traditional base ofthe membership began to move to the suburbs. And the inner city becamea little bit frightening to some people.”
Bain, 60, grew up at Northwest.
His parents, Sidney and Roma Bain, made their way to Chicago during the Great Depression.
From different corners of Arkansas, they met as founding members at thechurch in 1937 and married in 1941, the same year Northwest bought itscurrent building.
Elder Darrell Hutchens first visited in 1948. He met his future wife,Margaret, at the church in 1949, not long before the Army drafted himinto service in the Korean War.
“I’ve got a soft spot in my heart for this church,” said Hutchens, 77,standing beside a bulletin board urging members to “Be Involved” and“Be Christlike” by helping with ministries such as nursing home worshipand Sunday Knights activities for children.
But the longtime elder added: “It’s a struggle right now. We get people in all the time, but at the same time, we lose people.”

As members fled to the suburbs, returned to the South or died, theNorthwest church easily could have become a historical footnote.
Instead, church leaders embraced the challenge.
The church is in a heavily Catholic area that has seen the constructionof an Islamic center and a Buddhist temple in recent years. A RomanianPentecostal Church is just down the street.
Just after noon on a Sunday, a woman wearing a Muslim headscarf joinsthe line of residents who show up for the church’s weekly fooddistribution.
Each Thursday, Patrick Odum drives a minivan to the Greater ChicagoFood Depository and picks up about 1,500 pounds of beans, dry milk andother food. The church is the depository’s designated pantry for ZIPcode 60630.
“I’m actually Baptist, but you know, God don’t see no colors,” says Steven Stone, an unemployed mechanic waiting for food.
Church member Richard Cooper, a native of war-torn Liberia, said hefelt Northwest’s love when he came to Chicago in 2005 after severalyears in refugee camps in Sierra Leone and Guinea.
After getting to know Cooper, Northwest members worked with HealingHands International in Nashville, Tenn., and sent thousands of dollarsworth of food and medicine to help his refugee friends.
When his wife became pregnant with their fourth child, the congregationhosted a baby shower — something the family had never experienced, hesaid.
“These people, they do everything,” he said. “There was a lot of food.There was a lot of clothing. … So, Northwest Church of Christ is justlike my home now and even my family.”

When Odum was hired in 1994, the church already had started a ministryto the rising Hispanic population — and expressed a desire to serve anarea a few blocks away known as the “Koreatown” of Chicago.
“It was a church with a lot of history that had, like a lot ofchurches, gotten older. And the community had changed a bit,” saidOdum, a 1991 Bible graduate of Harding University in Searcy, Ark. “Butthey were trying to change with the community.”
As the congregation wrestled with the best approach to Korean outreach, the doorbell rang one day at the preacher’s house.
Odum opened the door and saw Moon Kim standing there.
“He said, ‘I want to start a Korean congregation in Chicago,’” Odum said. “So, it literally fell on our doorstep.”
Kim, who had come to the United States to study at ACU, served at the Northwest church for four years.
Chae, a one-time Buddhist who converted to Christianity and graduatedfrom Korea Christian University in Seoul, succeeded Kim as the Koreanminister 10 years ago.
“Even though I have been at many other jobs, I am happier as Koreanminister of our church,” said Chae, who once owned a tae kwon doschool. “Whenever one of my members is baptized by me after Biblestudy, it is not possible to express my happiness.”

Every Sunday, about 150 members of the Northwest church sing praises to God in English, Spanish and Korean.
The English-speaking assembly, which draws 80 to 90 men, women andchildren, meets in the auditorium at 9:30 a.m. About 10 to 15 Koreansgather downstairs at the same time.
Sunday school, including special classes for teenagers and collegestudents in the basement of the preacher’s house across the street,follows at 11 a.m.
About 50 to 60 people — most first- and second-generation immigrants —attend the Spanish-speaking worship assembly that starts at noon in theauditorium. Carlos Estrada, a graduate of Baxter Institute of Biblicaland Cultural Studies in Tegucigalpa, Honduras, serves as the Hispanicminister.
Until a few years ago, the Spanish speakers met in the basement.
“That just created the impression of second-class citizenship,” AlanBain said. “So, we tried to work out a schedule where both groups coulduse the auditorium.”
The new schedule — which included an earlier worship time for Englishspeakers — upset some longtime members and prompted them to leave. Butthe elders stuck by the decision.
“That was something very, how can I put it, something very kind that(the elders) did for us,” said Torres, 38, an immigrant from ElSalvador who hopes to serve as an elder someday. “We really didn’t likehaving communion downstairs, and somebody would open a door and slam itas they went to the bathroom.”
To help with church unity, the congregation conducts a joint worshipassembly about three or four times a year — with singing and preachingin all three languages.
“That’s nice because sometimes we see a lot of room over here,” saidmember Pedro Diaz, an immigrant from Mexico, referring to empty pews.“But when we all get together, it’s all full.”
“At the unity service, everybody is singing in whatever language. Ijust think that is awesome,” said Aasta Watson, whose husband, Greg,serves as a deacon. “I think that’s the way it’s supposed to be.”
“It probably sounds something like Pentecost,” said deacon Dan Allen, alongtime Chicago resident whose wife, Diana, serves as church secretary.
From the beginning, the church has “wanted to have the work in thedifferent languages as part of one body rather than a separate groupusing the facilities,” Bain said.
“We wanted to have one church.” 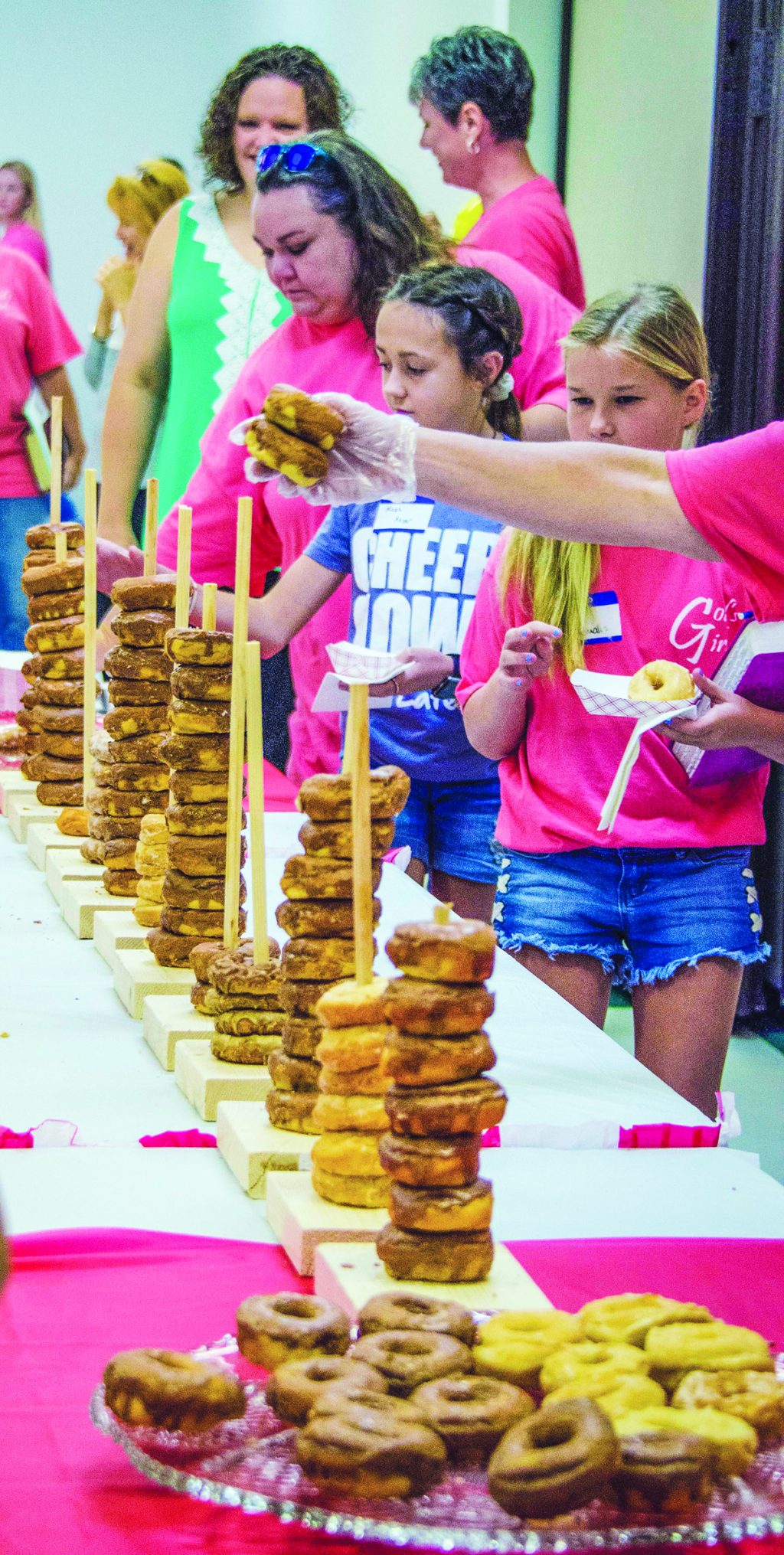