TULSA, Okla. – Diagnosed with a debilitating, always-fatal disease, Allan Trimble had a choice — to quietly fade away and feel sorry for himself or to praise God in the midst of his personal storm.

The longtime high school football coach and church elder’s decision to do the latter will resonate long after his death, speaker after speaker said Wednesday night during a memorial service that drew more than 3,000 people to Oral Roberts University’s Mabee Center. 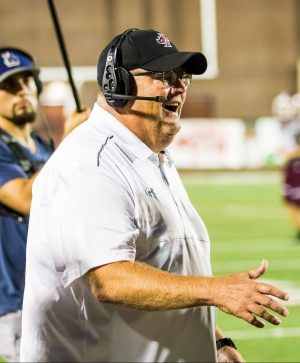 Trimble, 56, died Sunday morning at a Tulsa hospital, a little more than three years after being diagnosed with amyotrophic lateral sclerosis. Also known as Lou Gehrig’s disease, ALS is a progressive neurogenerative disease that affects nerve cells in the brain and the spinal cord.

While it slowed Trimble physically, it didn’t dim his spiritual fervor, said Mitch Wilburn, preaching minister for The Park Church of Christ in Tulsa.

“As demanding as a schedule that Allan had as a head coach, when he retired, he took it up a notch,” Wilburn said. “You couldn’t find where the guy was going to be preaching next. The guy went everywhere and did everything he could to preach up and stay up to the cause of Christ. He didn’t carry on … he turned it up. What a disciple! What an example!”

Reflecting on the career of legendary Jenks Coach Allan Trimble

Reflecting on the career of legendary Jenks Coach Allan Trimble, who won a record 13 state titles and passed away Sunday after a three-and-a-half year battle with ALS.

Trimble — a longtime member and elder of The Park church — coached the Jenks Trojans for 22 seasons, posting a remarkable 242-41 record with 13 state championships in Oklahoma’s highest classification. Members of Jenks’ current team — some of whom played for Trimble before he stepped down after the 2017 season — attended the service wearing their jersey tops, just three days before they’ll play in the Class 6A-Division I state championship game.

Dozens of Trimble’s former players and assistant coaches now are coaching at high schools throughout the Tulsa area and all of Oklahoma, and former Trojans have dotted National Football League rosters throughout the past two decades. The stadium at Jenks, and a street that runs by that stadium, are named for Trimble, who was inducted into multiple Halls of Fame, including the Oklahoma Sports Hall of Fame, perhaps the state’s highest athletic honor.

But more so than football, it was Trimble’s faith — and humor — that permeated the memorial service. Dove Award-winning singer Nicole Nordeman performed her song “Legacy,” and members of The Park’s praise team sang three a cappella songs, leading the audience in the famous hymn “Blessed Assurance,” which Trimble — who grew up in Cleveland, Okla., where he was baptized at the Cleveland Church of Christ at age 10 — chose for the service.

“He was a guy who took his holiness seriously,” said Fate Hagood, senior minister for the Metropolitan Church of Christ in Carson, Calif., who became a friend of Trimble’s after Trimble heard him speak a few years ago at the Pepperdine University Bible Lectures. “He was a warrior and used his circumstances for God’s glory.”

Wilburn spoke of receiving a phone call (while in the Dallas area) from Trimble’s doctor on Thanksgiving Day, telling the preacher he needed to return to Tulsa quickly to see Trimble. 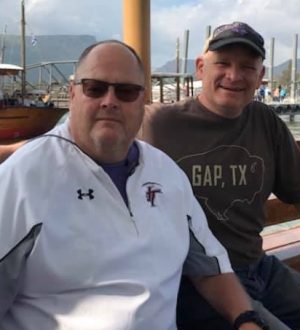 Allan Trimble and Mitch Wilburn together on a boat during a trip to visit the Sea of Galilee.

During the four-hour drive to Tulsa, Wilburn thought of what he’d say to his friend. He thought of a scene from the Oscar-winning movie “Dances With Wolves,” in which — as the main character is departing the tribal camp — a young warrior yells from a nearby bluff, “I am Wind in His Hair. Do you see that I am your friend? Can you see that you will always be my friend?”

After watching that scene together, Trimble and Wilburn cried, then Trimble said, “Mitch, I can’t dance anymore.” Then he looked at Wilburn and said, “Mitch, you don’t have wind in your hair.”

“The show must go on. You have to keep living your life.”

“His gift was sarcasm,” Wilburn said, smiling. “He said that. He claimed that. I’m not sure the Bible lists that as a Holy Spirit-given gift, but Allan would beg to differ.”

Darren Melton, athletic director and former football coach at Lincoln Christian School in Tulsa, spoke about how Trimble used football to deliver life lessons to those on his staff and his players, saying, “Allan coached life on and off the field.” 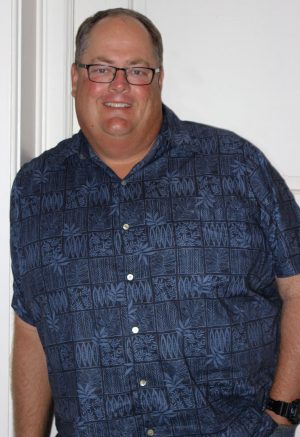 In a letter read by Melton, former Jenks and NFL offensive lineman Sean Mahan said, “Loving the Lord and loving others (was) how Allan lived every day.”

Trimble’s daughter Tori Trimble, a senior at Oklahoma State University, noted how her father’s influence — already considerable as a well-known, successful football coach — was extended further as he battled ALS. She explained how he decided not to dwell on the negative but to focus on the positive and to keep living life.

She said her father compared his diagnosis to losing a game to Union High School, Jenks’ archrival in the south Tulsa metropolitan area: “You can only be sad for one day. Then you have to get on with it. … The show must go on. You have to keep living your life.”

She noted how his thoughts were on taking care of others, even in his final days — Trimble asked his wife, Courtney, to remember to treat the hospital nurses to a steak dinner.

The Trimble family began the Trimble Strong Foundation in 2016 as a tool “for the purpose of transforming people from their current position spiritually, emotionally, physically, professionally and financially. We simply want to bring faith, hope and love into the lives of all the people that we interact with.”

A foundation video, with Trimble speaking, was shown during the service.

“When many men or women would have drawn into a fetal position and given up, he leaned into Jesus and obeyed the command to be strong and courageous.”

“I’ve been blessed to be a part of many championships throughout my career, and my list of accolades is pretty impressive. But at the end of the day, trophies are not what it’s all about,” he said. “We are called to run a different race, one where we diligently seek to help others, one where we develop spiritual champions and spiritual leaders that will make a difference for generations to come.”

Wilburn said Trimble’s faith remained strong throughout his ordeal, sharing a text he received from Trimble during his final days in the hospital:  “I know I won’t live one day more or less than what God has planned, but I’m feeling crazy blessed by the gift today, so pray for me to be more faithful to the great God we serve.” 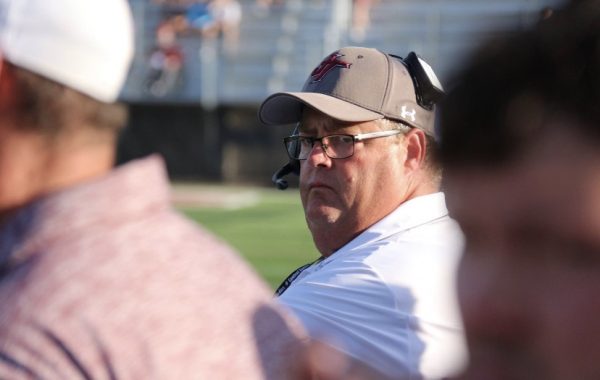 Allan Trimble gained the respect of his community in how he coached and how lived his life.

An emotional Wilburn said, “To ALS … you gave it your best shot, but you didn’t get it done. You lost. He beat you. He never gave up. He never cashed it in. He never backed down. When many men or women would have drawn into a fetal position and given up, he leaned into Jesus and obeyed the command to be strong and courageous. He turned the vessel of his life directly into the teeth of Lou Gehrig’s disease, and it was full speed ahead.”

Markus Paul was in his final season as an NFL… 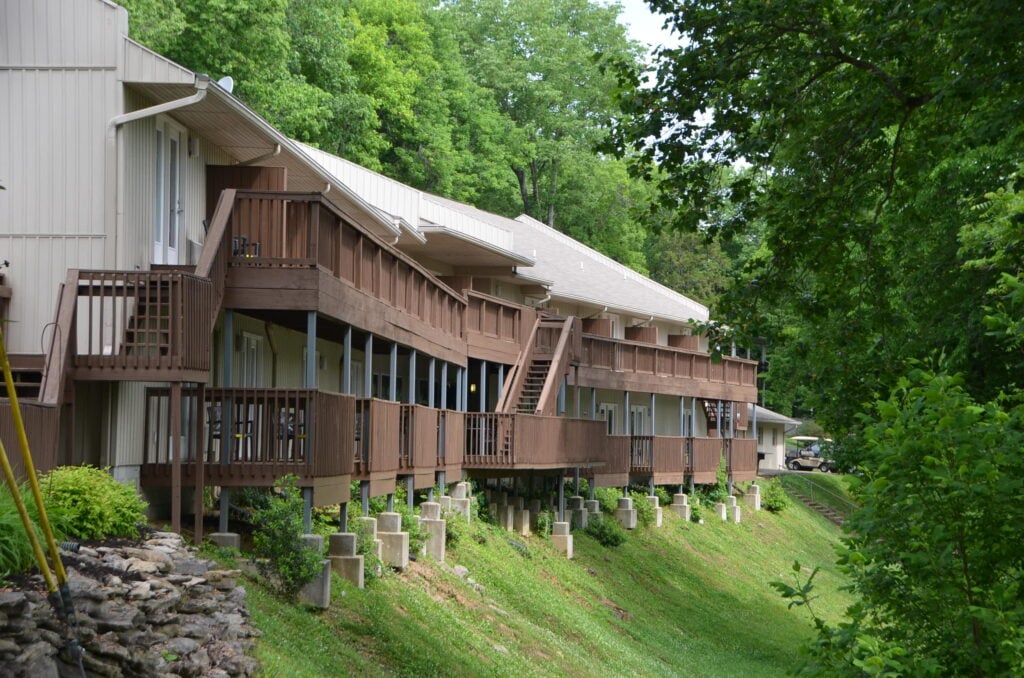 RIVERHEAD, N.Y. — Take a tour of the Timothy Hill…