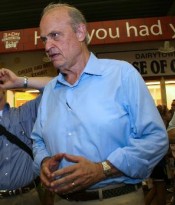 Thompson pulls out of presidential race

Staff Reports
Fred Thompson is out.
The actor and former Tennessee senator whose Church of Christ roots drew widespread media attention announced today that he’s dropping his Republican presidential bid.
Thompson, 65, was regarded early on as the Republican front-runner. Some pundits drew parallels between the statuesque conservative and former President Ronald Reagan.
But the conservative base divided when the candidacy of Mike Huckabee, former Arkansas governor and Baptist minister, gained steam. Thompson was criticized for reversing his stance on several issues in the summer and fall of 2007.
“Today I have withdrawn my candidacy for President of the UnitedStates,” read the statement. “I hope that my country and my party havebenefited from our having made this effort. Jeri and I will always begrateful for the encouragement and friendship of so many wonderfulpeople.”
The Washington Post reports that Thompson left the campaign trail over the weekend to care for his ailing mother in Tennessee. He finished third in the South Carolina primary Saturday.
In March 2007, Thompson’s faith became an issue in the national media whenFocus on the Family founder James Dobson said he didn’t think Thompsonwas a Christian.
The comment, published in U.S. News, appeared to throwcold water on a Thompson candidacy.
Thompson spokesman Mark Corallo countered afterward: “Thompson is indeed a Christian. He was baptizedinto the Church of Christ.” The issue of Thompson’s faith was discussedin the media throughout his campaign.