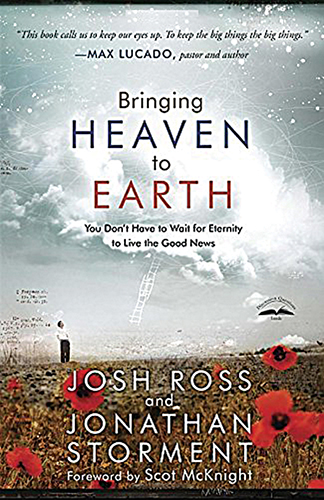 This world is our home, ministers write

Jonathan Minson
“This world is not my home, I’m just a-passin’ through.”

The words of that classic hymn summarize the attitudes of many Christians toward heaven and the afterlife. If we can faithfully make it through life in the present, fallen world, we can one day escape it and find a home in some remote realm for eternity.

Two ministers aim to correct this attitude in “Bringing Heaven to Earth: You Don’t Have to Wait for Eternity to Live the Good News.”

Authors Josh Ross, of the Sycamore View Church of Christ in Memphis, Tenn., and Jonathan Storment, of the Highland Church of Christ in Abilene, Texas, add their voices to a loudening chorus led by scholars including N.T. Wright. They call the church to rethink it view of the world to come. Bible scholars call this eschatology — a combination of Greek words for “last” and “study.” 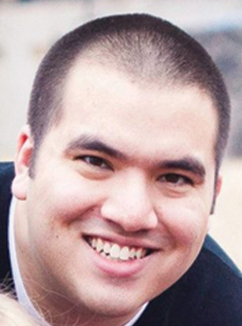 In Print | Jonathan Minson
Eschatology is the study of “end things,” and Ross and Storment do not treat it as some esoteric subject only for academics. They want everyone to understand the subject, because, as they write, “what you hope for shapes what you live for.”

Heaven is crashing into earth, they write. Christians are not called to passively leave the earth behind but to engage this world and fight against the injustices found in it.

They then transition into a discussion of the celebratory nature of Jesus’ ministry (what they frequently refer to as a “Jesus Party”), and what this might suggest for the church. This, of course, has implications for how the church sees both outsiders and insiders. The authors draw heavily on the parable of the Prodigal Son in support of their view, where the younger brother is the implied outsider and the older brother the insider.

The book closes with brief discussions of Christian hope, overcoming fear created by perfectionism and what Christian ministry should look like when informed by the heaven-is-for-earth view of the world.

With expert skill, Ross and Storment share moving personal stories and relevant illustrations that knit the chapters together in a way that breathes life into the message and draws the reader in more deeply. In doing so, they make a compelling plea for the church to take on this world, oppose social evils and strive for more open communities.

Most readers would, by now, recognize that Ross and Storment are advocating a form of inaugurated eschatology — the belief that the end times were inaugurated in the life, death and resurrection of Jesus. Therefore, the Kingdom of God has both “already” and “not yet” aspects.

“Bringing Heaven to Earth” lacks the theological bite of similar works on the subject — no doubt the intentional result of an effort to broaden the book’s potential audience.

Yet for a book about inaugurated eschatology, readers might expect more attention to be given to the inaugurating events themselves: the crucifixion and resurrection of Jesus.

To be sure, the Cross and resurrection receive mention in the book, but without the rich meaning found, not least, in Paul’s epistles. Thus, Christ’s death is never cast as an atoning work.

Similarly, concerning the resurrection, the authors write, “It is God’s way of saying, ‘The parties that Jesus has been throwing and attending are in tune with who I am.’” This may leave readers a bit puzzled. And without presenting a firm theology of the Cross, it may faintly call to mind the 20th century’s Social Gospel that likewise attempted to “bring heaven to earth” while unfortunately downplaying the historic Christian doctrines of sin and individual salvation.

Nonetheless, Ross and Storment have a message that perhaps is overdue in Churches of Christ.

We have long held that the Kingdom has arrived. Are we ready to put this belief into the uncomfortable practice that calls us to be agents of heaven on earth?

JONATHAN MINSON earned a master’s in biblical studies from Amridge University in Montgomery, Ala. He lives in Oklahoma City with his wife, Karissa, and children Brooklyn, Warren and Paul. They attend the Penn South Church of Christ.